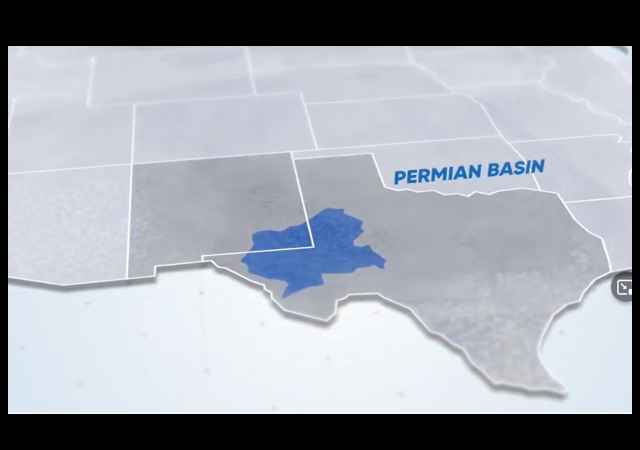 The Permian Basin, straddling Texas and New Mexico, is the world’s biggest oil field and accounts for over 40% of the nation’s petroleum production.

It is now in the regulatory crosshairs of the Biden administration’s Environmental Protection Agency . . . not because of carbon dioxide, but due to ozone.

The Environmental Protection Agency is weighing labeling parts of the Permian Basin as violating federal air quality standards for ozone — a designation that would force state regulators to develop plans for cracking down on that smog-forming pollution. The move, outlined in a regulatory notice, could spur new permitting requirements and scrutiny of drilling operations.

Ozone levels in the basin have surpassed a federal standard “for the last several years — really since the fracking boom took off in the Permian,” said Jeremy Nichols, climate and energy program director for WildEarth Guardians.

The conservation group formally petitioned EPA for the so-called non-attainment designation in March 2021 and, roughly six months later, warned the agency it intended to sue to force action. The designation “basically says you’ve got to clean up this mess or the consequences are going to get even more severe as far as restricting your ability to permit more pollution and more development,” he said.

Texas Governor Greg Abbott directly called on Biden to reign in his EPA, as this action is directly threatening the nation’s petroleum supply.

Abbott says such a finding could lead to “skyrocketing prices at the pump” by crimping oil and gas activity in the Permian basin, which is now producing more than 5mn b/d of crude and 20 Bcf/d of natural gas. Abbott argues Biden should intervene to halt the redesignation process, as a way to stick to his promises to lower gasoline prices for consumers.

“If you let the EPA move forward with untimely and unnecessary measures that accompany redesignation, that action will put at risk 25pc of American oil supply,” Abbott said in a letter to Biden today. “That, in turn, could substantially increase the cost of gasoline.”

It appears the Biden administration’s environmentalist goons have decided to use ozone regulations to try and ban fracking and will continue the approach to further control the production and use of fossil fuels.

Climate activists also want EPA to tighten ozone standards to indirectly regulate CO2 from fossil fuels. Joe Goffman, a champion of this idea, is leading EPA’s Office of Air and Radiation on an acting basis, and he’s in charge of ozone rules.

Mr. Goffman midwifed the Obama Clean Power Plan that had sought to conscript states into a force-fed green energy grid transition until the courts killed it. A 2014 article from E&E News described Mr. Goffman as the “U.S. EPA’s law whisperer. His specialty is teaching an old law to do new tricks.” How many more tricks does he have up his sleeve to keep gas prices high?

I find this interest in ozone levels fascinating in light of the Supreme Court’s decision about the EPA’s abuses of its power in regards to carbon dioxide.

For more on how vast the petroleum resources of the Permin Basin are, please check this video.

No need to fear. Sen. Cornyn will be on the case as soon as he finishes his next assignment: McConnell’s “bipartisan” public school funding bill that will ensure that CRT is part of the national school curriculum. The Republicans are even worse than the Democrats.

Not worse. And it’s a select list. Cruz is my senator. He’s gotten quite a few emails for his staff to filter from me pointing out he needs to talk Cornyn down from the insanity he is currently engaged in. Cruz is actually pretty persuasive. He might manage it.

My theory is that Cornyn has become McConnell’s go-to guy since John Thune started looking iffy for re-election. Thune is/was McConnell’s choice to succeed him as Senate Republican leader when he retires. Cornyn obviously wants it bad. Cruz might have an angle on that and using it for leverage to dissuade him.

The EPA is the most destructive government agency on Earth. It must go.

And dept of Education

That is the way Global markets work.

And like the dept. of education, dept. of energy, and the badly misnamed “homeland security” agency, is unconstitutional.

Remember that ozone hole over Antarctica? The one that closed even as China, India and other major third world nations didn’t reduce emissions.? Oh, the the First world did and since their laws were passed … that what closed the hole… right…. There is a time and place to change things… but not at the cost of destruction. I hope that we can keep track of these administrators… so that when things crunch we can have them lead by example… after reduced to the lower economic tiers to see what suffering is like. Looking forward to the tsarina of energy and of EPA living within their reduced means.

She died mysteriously just like every other person associated with the Clintons.

That hole was caused by the coolant Dupont had copyright for. So we all had to switch to a different, copyright/patent protected chemical. Ha ha ha. We pay. While I agree with conservation, and protecting our environment, the environmental Greenies are crazy.

Do preventative burns and logging, with logging roads, effect the forest? Yes. Are out of control forest fires worse? Much. The environmentalists get hysterical and totter from one end-of-the world crisis to the next. Whatever happened to acid rain?

The West Virginia v EPA decision made clear that EPA has only the powers delegated to it by Congress — it can’t regulate CO2 emissions (for example) because Congress didn’t give it that power, nor could EPA logically construe it from the powers it did have.

The question then is simple: does EPA have the power to regulate ozone emissions? I don’t know oil drilling and environmental law but that looks to be the issue. If ‘ozone’ is (for example) in legislation about pollution, than EPA has the power, and the states will have to use the political process to fix this. Given that the Biden administration apparently sees $10 a gallon gasoline as a feature, that’s going to be difficult.

Yes the EPA does have the authority to regulate ozone.
It remains to be seen if that authority extends so far as to curtail oil/gas fields which even for the grossly overreaching bureaucracy at EPA is a novel idea.

This is an example of what sort of actions we need to demand from our elected officials. All it takes to stop this sort of excess is to invoke the administrative procedures act authority and take that authority away. Failing that the next r WH and Sen and HoR can simply change the law or heck eliminate the agency altogether.

We must not be distracted or appeased by worthless kubuki theatre show votes by the establishment. Here’s a tell; is Lindsey Graham on Hannity running his yap sounding tough about a domestic issue? Is he threatening to ‘get to the bottom of something’ or that he will lead an investigation and ‘heads will roll’ ?

That’s a sure sign that whatever BS he is slinging is Kubuki theatre unless he has a direct personal interest financially or it would impact his personal political power or his personal physical safety.

It has zero Constitutional authority and the EPA needs to be shut down.

That is partially wrong as well as incomplete. The EPA does have Constitutional authority because Congress delegated authority to it and the CTs have upheld that authority. Whether you and I agree with those decisions as a matter of policy choices and preferences is another thing entirely.

Please be so kind as offer evidence to support your position. FWIW I agree with your sentiments re the EPA but wishes ain’t fishes.

Did you need more time to work on your answer or have you conceded the point?

It’s far too dangerous to produce our own oil. There is always a danger there might be an itty bitty leak. It is far safer to transport oil in super gigantic oil tankers from half way around the world. That way if it leaks it’s somebody else’s problem.

Anyway we won’t need any stinking oil as soon as we can get everybody to start driving electric cars.

No, because the E/C will need to charge their batteries up and that comes from the power plants (coal, oil, natural gas). The internal combustion engine is still your best investment!

It sounds to me like we we have to start using coal to power all those electric vehicles.

What would happen if Texas told the feds to eff-off?

Abbott is no DeSantis

The state needs to refuse.

Defy the SOBs at the EPA, ignore them. What can they do?

So if members of Congress like Auntie Maxine, Fauxcahontis Warren and Sandy (D-Bartender) are screeching about ignoring SCOTUS why shouldn’t State Governors just say no to the EPA?