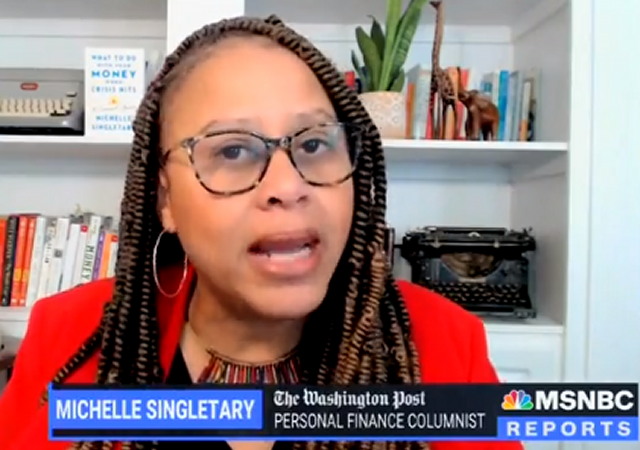 Washington Post finance columnist Michelle Singletary wants Americans to know that despite record-high gasoline and food prices, things aren’t really as bad as you might think.

During an appearance on MSNBC yesterday, she said that people need to stop complaining and realize there are plenty of people who are doing very well.

Everyone can imagine a writer for the Washington Post defending record inflation if it had happened on Trump’s watch, right?

A Washington Post columnist told Americans to “stop complaining” about the effects of inflation while on MSNBC Wednesday.

“You got to stop complaining when there’s so many people who literally the inflation rate means they may only have two meals instead of three,” Michelle Singletary, a personal finance columnist for the Post, said during “Chris Jansing Reports.” “There are Americans who did extremely well in the last two years in the market.”

“You still have your job,” Singletary said. “And yeah, it’s costing you more for gas, but guess what, you’re still going to take that holiday, that Fourth of July vacation, you could eat out.”…

“Stop looking at your portfolio,” Singletary said. “And you know what you can do with all that energy? Help other people, help put some food on the table of somebody else’s house because you have extra.”

WaPo’s Michelle Singletary: “There’s a great deal of Americans where it is uncomfortable that they’re spending more, but they are not going to go under. You know, you got to stop complaining … Overall, many Americans are not suffering as much as they think they are.” pic.twitter.com/epCwq6NeG2

All of a sudden, media people and Democrats (but I repeat myself) are making excuses for the nightmare level of inflation happening under Biden.

This is a real headline from the Los Angeles Times:

prepare for a lot more of these headlines as biden tanks the economy. https://t.co/K5KGLgogim

Energy Secretary Jennifer Granholm reminded us that people in other countries are paying more for gas. Don’t you feel better already?

Energy Secretary Jennifer Granholm lists off the prices of gas in foreign countries, as if that's supposed to make Americans feel better about paying record prices when they fill up. pic.twitter.com/rFlWGWFPui

It’s nothing but excuses all the way down, and it’s not going to cut it with voters.

Yeah, I can totally see how the WAPO would be consistent on this message during a r admin. /S

Michelle Singletary, whose net worth is 7 million and annual salary is $135,000, is not concerned about rising prices because it doesn’t concern her. She says, “I can afford to pay more. So there!”

Is she one of the BLM grifters?

Or she always could have married one. Like Kerry.

Her response to the hoi polloi: “Fuck you. I got mine.”

She can jump up her own ass with her remarks. Newsflash, lady. Not everyone is doing fine. Learn some perspective.

I’m having trouble imagining her as being above anyone. But she does have a nice salary there at WaPo, which I bet she isn’t using to help anyone else.

Where do you even see what her net worth is?

Granholm, who reported owning between $4.4 million to $16.8 million in corporations and private assets such as real estate holdings, says she is not concerned about the rising cost of fuel because it’s expensive everywhere.

Why should she be concerned when the government pays for her flights?

Joe Biden’s “Hold my breath until I turn Blue” Sanctions are killing the Global economy. Meanwhile, the Rubal is hitting all time highs.

Get ready folks. The operative word for the next 20 years is:
De-Industrialization.

The past 42. I came out of college right into the Reagan presidency of shipping our industry to Japan and letting LBO’s hollow out the finances of our formerly great corporations, while telling us “it’s morning again in America”.

Could this person be more out of touch with reality? Inflation, as measured in the 1970’s as a fixed basket of items, is probably running 10 points above wage increases. That is a very big deal to anyone who is not rich, especially those living on fixed incomes, like the elderly. Even the well-off have gotten hit by major declines in both stock and bond values in retirement or other savings. Consumer sentiment, recently reported at record lows, is a better indictor than WaPo.

Way more thought and analysis there than what the blatherings of this “finance columnist” merit. Couldn’t even bring myself to read it carefully because of what all this comes from. But presumably you’re right.

She reminds me of Urkel with hair weaves

We all know how hysterical and attacking they would be if a Republican were President.

This crap from Bezos’ Compost, Pravda on the Potomac where the truth goes to die in darkness. Leftists are insane. This one is vomiting up bovine excrement. Go figure. Brandon screwed up his family, now he and his insane followers want to do that to America.

That’s Equity for you.

Yes. The best way to help us feel better about the current situation is to command us in the most arrogant way possible to stop feeling bad.

‘The beatings will continue until morale improves.”
I remember when that was considered a joke, not White House policy.

I just can’t get in the mindset of being commanded by her though. I’m not allowed to slap her, but I can laugh at her.

How tone deaf can the Editorial Board of this newspaper be to have this be their public voice on the crisis which 90% of Americans are dealing with?

Rhetorical question I know….yet it makes one shake their head in disgusts for the ignorance of their chief staff members.

They want to tell people to fack off, but they use a black woman so it’s harder to tell her to go to hell. Well I’m up for those important tasks, in the words of I think JFK, “not because it’s easy but because it’s hard”.

On a plus note, we might need to go back to paper elections if there is no electricity to run the fraud machines, err, computers.

The woman is illiterate and gets to write a column in a major publication? She sounds down right authoritarian in her demands.

“so I’m gonna need you to calm down and back off”
Don’t give a F what you need, privileged biyotch.
Imma need you to get out my face and STFU.

Somebody needs to tell these dumb broads that wearing enormous eyeglasses does not make you smart.

This woman obviously should not be in the position she is in as she has no clue to what inflation is doing to the people of the USA.

She’s obviously got excess money she’s gonna need to give away.

definitely aa hire–well, she’s too damn stupid to qualify for a moonlighting gig at the zoo–probably best– if anyone saw her walking around there would probably trigger an escape alert

Hey! No monkeypox jokes! Those are for Democrats only!

I’m gonna need Michelle Singletary to show how she’s giving away a lot of her time for free and her pay as well helping those less fortunate, even if they’re white.

Or else I’m gonna need to laugh at Michelle Singletary and wonder why anyone would care what she thinks.

When Anthony Johnson was released from servitude, he was legally recognized as a “free Negro.” He became a successful farmer. In 1651, he owned 250 acres (100 ha), and the services of five indentured servants (four white and one black).

In 1653, John Casor, a black indentured servant whose contract Johnson appeared to have bought in the early 1640s, approached Captain Goldsmith, claiming his indenture had expired seven years earlier and that he was being held illegally by Johnson. A neighbor, Robert Parker, intervened and persuaded Johnson to free Casor.
Handwritten court ruling.
March 8, 1655

Parker offered Casor work, and he signed a term of indenture to the planter. Johnson sued Parker in the Northampton Court in 1654 for the return of Casor.

The court initially found in favor of Parker, but Johnson appealed. In 1655, the court reversed its ruling.[17]
Finding that Anthony Johnson still “owned” John Casor, the court ordered that he be returned with the court dues paid by Robert Parker.[18]

This was the first instance of a judicial determination in the Thirteen Colonies holding that a person who had committed no crime could be held in servitude for life.

that Fourth of July vacation

Am I? Given the uncertainty a flight will actually take place, and the +50% and rising ticket prices, no I’m rather likely not to take that vacation.

Granholm lists prices without equalizing for tax burden, a standard bit of lying by Democrats.