Thousands of Cows are Killed by Extreme Heat in Kansas

Thousands of Cows are Killed by Extreme Heat in Kansas

High heat paired with high body fat contributed to the die-off of an estimated 2000 cows. 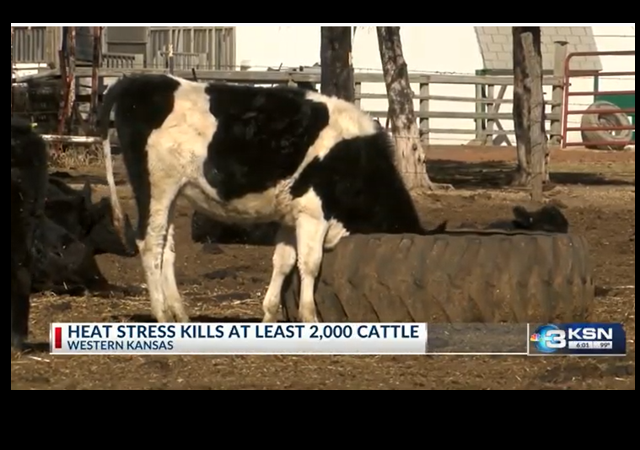 2022 has been an extremely difficult year for Americans who make their living thought livestock.

We recently noted that a massive fire killed tens of thousands of chickens in a Minnesota egg farm. California regulations have gutted pork farms in the region.

Now it is being reported that thousands of cattle died in Kansas in recent days due to sweltering heat and humidity.

The deaths are centered in southwest Kansas where “several weather factors…led to heat stress for cattle,” a department spokesperson said.

Temperatures were in the 80s and low 90s until a sudden spike to 100 degrees on June 11, followed by two more days of triple-digit heat, according to the Weather Channel.

At least 2,000 animals were lost, Reuters reported. That figure is based on the number of carcasses state officials were asked to help dispose of.

Kansas is the third largest US cattle state behind Texas and Nebraska. An usual weather pattern in southwest Kansas led to conditions where the temperatures did not cool off at night. The effect may have played a role int the cattle die-off.

Heat stress doesn’t happen all at one time. Cattle accumulate heat during the day, and then over the nighttime hours, it takes four to six hours for them to dissipate that heat’, said veterinarian AJ Tarpoff, who works with Kansas State University Extension.

‘As long as we have a cooling effect at night, cattle can mostly handle the heat. Where we run into issues is where we have two to four days in a row of minimal nighttime cooling, and we start the day with the heat load we accumulated the day before still there.’

The cows could not acclimate to the sudden change, said Scarlett Hagins, spokesperson for the Kansas Livestock Association.

The state advised ranchers to provide cattle with extra water and check their health.

Parts of western Kansas and the Texas are expected to reach 110 degrees over the coming weekend, though stronger winds and lower humidity levels should help minimize cattle deaths.

Another factor in the deaths been that there cattle were designated market-ready cattle for the most part, and about ready to head to the processor. Their weight made them more susceptible to heat stress.

At that stage, feed yards manage those cattle differently, especially in the summer months.

“We limit cattle to one heat-generating event a day to minimize those extremes,” [veterinarian Miles] Theurer says. For example, they won’t move cattle from pens twice in one day, or they will manage the feeding times so that digestion doesn’t generate additional heat at the wrong time of the day.

“Feed yards also were providing additional water tanks and bedding to mitigate some of that solar radiation (in the pens) to lower the heat for those cattle,” Theurer says.

It’s a little like if you were an overweight person and you jogged a 5K in 105 degree heat. You would drink more water to cool your body temperature, and you wouldn’t necessarily run another 5K that same day to let your body recover.

As for large shades that are used in some areas of eastern Kansas to cool cattle in feed yards, Theurer cautions that using those in western Kansas may actually wind up causing more trouble. This was an extraordinary event—typically there is more wind and lower humidity for cattle. Adding shades can actually cause crowding in a pen, generating more heat among those cattle, defeating the purpose.

Here’s hoping there aren’t any more meat supply disasters as we head into the summer months. Otherwise, barbeques will not be the same.

An estimated 6.35 million cattle in Kansas.
So 2000 dead is 0.032%. A large number in abstract
but probable not an outrageous amount depending
the circumstances.

Texas also… so many more

It seems less extreme heat that leaving them in the sun with high humidity and lack of water to drink and cool off. When it is hot, cattle go to shade or wallows.

The armchair quarterbacks see something afoot here. This is common it just doesn’t make the news every year. YES, I’m a Rancher in that area.

The Gateway Pundit and CFP crowd world blame “the jab” despite no cows getting the COVID experiment shots.

Yeah, but if but if cows did get the jab would the jabbers be called cow pokes?

Yeah, well, gateway pundit had never been a reliable source. I have no idea what CFP is supposed to be. Is it like @QAnon? Like I’m supposed to know. I don’t know. The lefties lump us all in together and we’re all supposed to be in synch because, I’ve never heard about this s**t. Who?

To the issue at hand. Isn’t lack of water one of the risks of raising cattle? Oh, I don’t know, lack of food? And why aren’t we culling the herd before it dies of starvation?

There are just some things I’d plan on if I were going into livestock.

I went online to find photographic evidence to back up what I wanted to say. It’s like they’re ashamed of it, they can’t make it disappear fast enough. I was born in a California that now no longer officially exists.

Hey, raise your hands! Who doesn’t belong in New England anymore? It seems like it was just yesterday. But it’s going on 20 years. I was at the Naval War College. It sounds like a place I should fit in.

I don’t fit in anywhere anymore.

I’m curious. How often does this happen?

Were the four cows on “The View” among the dead?

Were any of the cows former associates of Hillary Clinton?

They may have had information, but I doubt they would have talked.

It would have depended on their mood.

You’d better import some tough North Queensland cattle; when it gets down to 37.8 Degrees and they start discussing the possibility of snow!

Somehow I don;’t think there’s much of a market for tough cattle of any breed.

You’d better import some tough North Queensland cattle; when it gets down to 37.8 Degrees CENTIGRADE (100F) they start discussing the possibility of snow!

Welcome. Is the Battle of the Coral Sea still a holiday?

Just a reminder that Buraq Hussein Obama moved America’s infectious disease laboratory from Plum Island, NY, where it was easily defensible against attack by a five inch naval gun, to Dennison Ave, Manhattan, KS, a mile away from the nearest mosque. In preparation for that move the terminal at Manhattan Regional Airport was expanded in size from roughly 5,000 sq ft to 43,000 sq ft by 2016.
Whhan Institute of virology, anyone?

Wait, what? I thought that this was going to be about a BBQ. I know that at least one cow died for my sins at Busters last Wednesday, and possibly another yesteray at Prime Rib night at Pizza Roma.

Don’t you miss the days when the Catholic church sold honest indulgences?

Wait. What? Shouldn’t beef prices be coming down with these milli0ns of cattle falling over dead?

OK. I can be wrong. But why aren’t these beeves being carved into steaks?

It seems like an awful waste. Assuming that it’s predictable, an the amount of water and feed to sustain your herd is, why are these cattle wasting in the field?

cattlerange.com is the authority for the beef industry.

How hard was that?