“In a 4-3 decision marking a post-recall shift, the Board of Education voted against the superintendent’s plan to extend lottery admissions for Lowell while a task force assesses high schools and makes recommendations.” 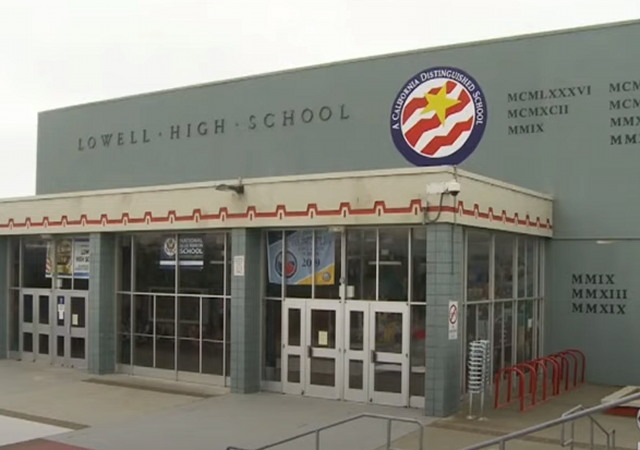 Lowell High School is known as one of the best in San Francisco. In years past, students worked very hard to get into the school, but months ago the admissions were changed to reflect the progressive ‘equity’ agenda.

The school went to a lottery system, outraging parents. This ultimately led to the ouster of three school board members. The Asian community played a major role in the campaign.

Under the lottery system, grades at the top performing school began to fall rapidly.

Now the school is going back to its merit-based admissions policy.

San Francisco Unified School District’s board of education voted Wednesday against an extension of a recently-imposed lottery system for student admissions at Lowell High School.

The 4 to 3 vote will reinstate merit-based admissions for incoming freshmen at the esteemed academy in fall of 2023. The failure of the school district superintendent’s resolution to extend the lottery system means a return to applicants meeting a designated grade point average and standardized test score criteria for admission.

We previously reported, the district stopped the merit-based admissions for 9th graders during the COVID pandemic claiming there wasn’t adequate criteria to judge students because of distance learning.

The school board voted to make the change to a lottery system permanent, but critics sued over the switch. Last year, a judge ruled that the school board did not follow state law when it voted to end the competitive admissions process.

Once again, the Asian community played a major role in the change:

Thousands of normal parents, many of them Asian-American, had to endure being called white supremacists every day by unhinged activists for more than a year to reach this outcome https://t.co/tkwtsSmJxf

This was a win to be sure, but the battle is not over.

Note how the San Francisco Standard describes merit-based admissions as a “controversial” policy:

In a striking turnaround, Lowell High School will return to selective admissions in fall 2023, the San Francisco Unified school board decided Wednesday.

In a 4-3 decision marking a post-recall shift, the Board of Education voted against the superintendent’s plan to extend lottery admissions for Lowell while a task force assesses high schools and makes recommendations. The school will go back to using grades and test scores to determine eligibility.

Commissioners unanimously approved a separate proposal for a task force that will examine schools with selective admissions: Lowell and Ruth Asawa School of the Arts.

“I believe in an academic magnet school,” said Lam, who cast the swing vote. “I support, at this time, criteria-based admissions. Lowell as a school is not perfect on its own, and neither is its admissions process. I’m fully committed in ensuring we move forward as a district.”

Even with the obvious collapse of the high standards at Lowell following the change, the board still only managed a razor-thin 4-3 vote to return to merit-based admission standards. That’s rather remarkable, particularly when you consider the fact that during the last semester, guidance counselors were discovering failing students who had been admitted to the school despite having a barely second-grade mastery of reading or math.

Students who can excel must be allowed to do so. Bringing everyone down in the name of fairness helps no one.

In 100 years we have gone from teaching Latin and Greek in High School to teaching remedial English in college.. ~Joseph Sobran.

See also Robert Heinlein’s essay on the decline of education, “The Happy Days Ahead”, published in Expanded Universe (a collection of Heinlein’s essays and short stories).

Merit based is like showing a Dem lefty the cross or something.

Merit-based policies recognize the individual dignity in conflict to a steaming pile of diversity [dogma] (i.e. color judgment, class-based bigotry). Instead of a cover-up (e.g. diversity, inequity, and exclusion (DIE)), they should discern the objective basis for disparate outcomes, including individual choice(s).

Unless you work in Washington where they beat people over the head with their Ivy League diploma claiming they are so much better and smarter than everyone else.

I was thinking right cross. But I like yours better.

If parents keep up their involvement in local government, California could be reformed into a decent place, again.

One reason why the crusade to “take back the government schools” is doomed to failure is that this 4 to 3 vote to return to merit based admissions can be undone after the next election.

Why is it unethical? And what do you mean by “impose”, anyway? On whom exactly is it being imposed? The parents whose children aren’t good enough to get in? What gives them any reasonable expectation otherwise?

On this I agree. For all kinds of reasons. I just don’t get the one you offered.

Oh, what a progressive path we pave, when first we exercise liberal license to indulge diversity [dogma].

1) the return to merit based admissions is never going to be safe because it is heresy for Democrats to have merit be the basis for anything. Worse than holy water to a vampire.

2) The Peoples’ Democrat Republic of Alta California will always be Democrat run regardless of the actual vote because the Democrats control both the vote counting and the vote reporting. They know that the despicable citizens will try to fight back, and they will be ready to cheat enough to win.

It’s nice to see some ground regained, a school recovered. It’s going to be weird for the one year (or is it 2?) worth of kids that are academically way below the rest. Let’s hope the environment inspires them rather than crushing them, probably some of each.