The Asian community was unimpressed by racist tweets from Alison Collins and the effort to change a school’s admissions policy to a lottery. 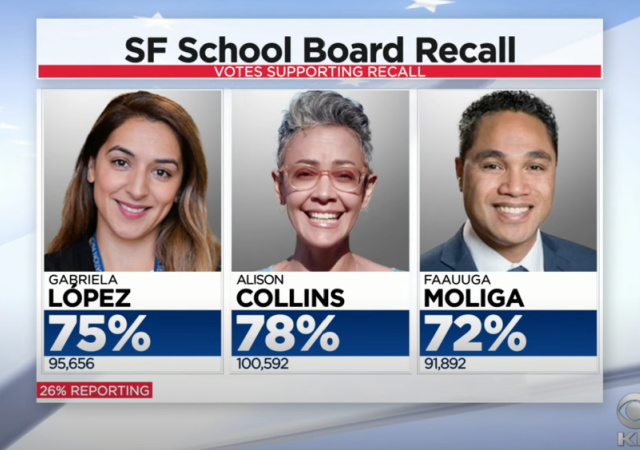 People are still reeling from the stunning upset in the San Francisco recall vote that ousted three school board members.

In the case of Alison Collins, her fate may have been sealed by racist comments she made on Twitter about Asian-Americans.

Some of the strongest support for recalling SF School Board member Alison Collins was from heavily Asian areas like Sunset (87%), Chinatown (84%) and Richmond (84%).

Back in March of 2021, the San Francisco Gate reported:

The vice president of the San Francisco Board of Education once wrote a long Twitter thread accusing Asian Americans of using “white supremacist thinking to assimilate and ‘get ahead,'” and comparing them to a “house n****r” (she added the asterisks and did not spell out the word).

Alison Collins’s tweets — still not deleted as of Friday morning — were written in December 2016. They’re coming to light now as a group pushes to recall the entire school board over prolonged school closures, and also during a time when anti-Asian American rhetoric has come under closer scrutiny following a sharp rise in hate crimes.

Collins wrote that she was “looking to combat anti-black racism in the Asian community at at my daughters’ mostly Asian Am school,” because “Many Asian Ss and Ts I know won’t engage in critical race convos unless they see how they are impacted by white supremacy.”

I wonder why Alison Collins was so unpopular in Chinatown. I guess it’s a mystery. https://t.co/EU21Ml8RK9 pic.twitter.com/ypAd3CtIPX

Judging by this recent tweet from Collins, she still does not understand the issue:

So when I have said in the past that SOME members of the AAPI community have aligned themselves with whiteness, it’s a historical fact, not an opinion. It’s surprising to me that some folks still find this idea so controversial. https://t.co/a8cvjiv6ko

People have clearly had it with the ‘woke’ BS taking priority:

San Francisco voter says he voted to recall far-left school board members because he “saw the school board prioritize renaming schools over getting kids back into school.” pic.twitter.com/R6K0dLN3Rt

The push to diversify Lowell High School in San Francisco by changing admissions to a lottery system also played a big role. The SFist reported back in October:

After already suing the district over changes to Lowell’s merit-based admissions system, a group of Lowell High alumni are seeking a court injunction against attempts to diversify the prestigious high school’s student body.

It’s fair to say that some of the Recall the SF School Board animus is because of a botched school renaming effort, while some of the sentiment is because of a bizarre $87 million lawsuit recently lodged (and tossed out) from board member Allison Collins. But do not underestimate the factor of the ending of merit-based admissions at Lowell High School, a move meant to diversify the student body at Lowell, but one that also enraged many Lowell parents to the point that they sued the school board in April in hopes of reinstating the former status quo.

The left will ignore this recall at their own peril.

If it can happen in San Francisco, it can (and will) happen anywhere.

A minority was ignored and that was key?? sarc.

The Left will ignore it. It’s who they are. No leftist dares to step out of line or be seen as the first one to stop applauding.

I don’t give two shits, honestly.

The only thing that’s going to happen is the idiots are going to elect more far-left lunatics to replace them that are just smarter about not publicly announce their lunacy.

Not a single one person that I’ve seen has even pretended that they aren’t still committed Democrat voters.

“Not a single one person that I’ve seen has even pretended that they aren’t still committed Democrat voters.”

I once thought I saw a spot on a leopard change but I was mistaken.

But not enough Asians to oust Newsom, I guess. Sad.

Well you know what Henry? Since the filthy marxists consider Asians as White, perhaps we need a little reach out effort to the Asian community. Identity politics being the norm now we should attempt to bring Asian-Americans into the European-American fold.

We do need an outreach to Asians, and the first thing to remember is that many of them are either from, or have parents or grandparents from communist countries and pretending the Dems are communists won’t fly with them because they saw actual communist states.

Democrats are about as marxist as Ion Antonescu, or Benito Mussolini, or Salazar.

I meant to say saw or have parents or grandparents who saw actual communist states.

Funny. Every day, I see more and more articles from these people with headlines like “I left XYZ to escape communism, and now I’m being threatened by it here.” Some here, in fact, but plenty elsewhere.

Do you know someone who is keeping them out? I don’t.

California is lost. Get out now,

When doing your homework and learning to solve quadratics is inculcated as “white-supremicist,” one can grok how, despite manifold efforts for it to auger otherwise, the African-American subculture became an epic economic failure to launch