“The Republican issue advantages are larger and, importantly, on the top issue. They are preferred on inflation (R+19 points), border security (R+19), crime (R+13), and foreign policy (R+8).” 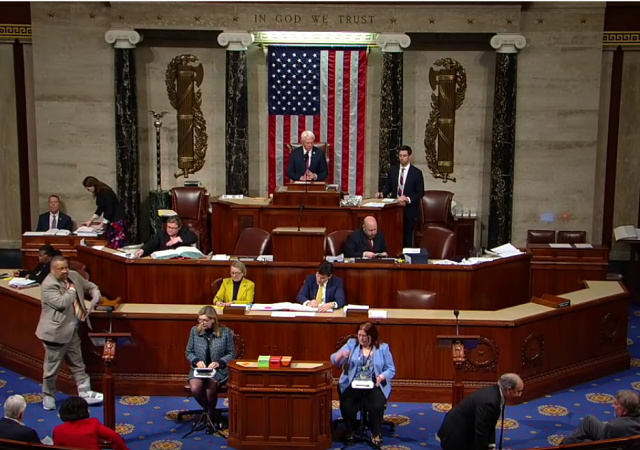 As the November midterms approach and Democrats waste America’s time with January 6th theater, average Americans have other concerns. It turns out that issues like the economy, inflation, and crime matter far more to most people.

In even worse news for Democrats, new polling indicates that most voters have more trust for Republicans on these issues.

A large majority of voters say the economy is in bad shape. Two-thirds are pessimistic about conditions. Gas and grocery prices are a major problem for most families. And a growing number of voters feel they are losing ground financially.

That’s the grim backdrop for the upcoming midterm elections, according to the latest Fox News national survey.

Forty-seven percent feel they are falling behind financially, up 20 points compared to last June. Some 42% are holding steady, while only 10% are getting ahead.

Eight-two percent of voters rate the economy negatively, including 57% who describe it as poor — the highest in a decade…

One of the most stunning findings of this poll, is that despite the fact that Democrats have spent a year and a half screaming about “our democracy,” Republicans even have an advantage on that issue:

Which Party do you trust to handle:

Tristan Justice of The Federalist has more on that:

After A Year Of Democrats Hyperventilating Over Jan. 6, Voters Trust Republicans More To ‘Protect Democracy’

For all the showmanship presented by the Jan. 6 Committee for the supposed sake of saving American democracy, voters trust Republicans more than Democrats to preserve the bedrock function of the republic.

According to a new Fox News poll out Wednesday, 46 percent of registered voters said Republicans would “do a better job” on the “preservation of democracy,” compared to 45 percent who said the same of Democrats. Three percent said the two parties were equal in their democratic commitment and 6 percent were unsure.

Fox News surveyed 1,002 registered voters by phone with a 3 percent margin of error between June 10-13.

The results come as Democrats have built their long-term strategy by smearing Republican opponents as hellbent on dismantling democratic institutions — whether it be by branding new election integrity laws as undue voting restrictions or using Jan. 6 hysteria to push for annulment of the electoral college.

Please be kind to legacy media and don't retweet this? pic.twitter.com/CpKyrIYBjk

Here’s the entire image in case you can’t see it: 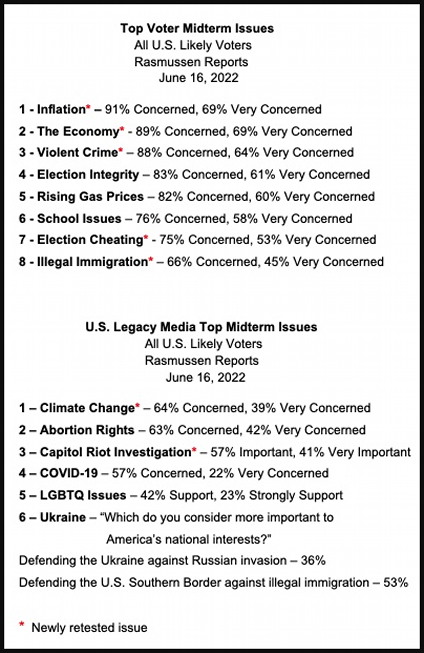 Also, according to Rasmussen, these are the top issues for independent voters. Note the top five:

None of this polling bodes well for Democrats in November.

We’ve just had a year full of demonstrations why communists and their pedophile-in-chief should never be trusted with anything.

Some people have short memories.

They need to save their trust until the Reps earn it. They haven’t been too stellar in that regard for quite a while now (it’s not good enough to be marginally better than the other guys).

Hmm…think you have no memory at all. I’m not saying the Reps are steller. I’m saying the Dems are catastrophic. I’m not sure our country CAN survive 2 and 1/2 more years of whatever the [email protected] Biden ‘thinks’ he is doing. I know for certain my 18 year old has a better grasp of Economics from high school Econ that Biden’s crew does.

A few reminders from my memory.

We have a border that has been wide open to illegal immigrants for decades now. The Republican party has done bupkiss about it, even when they held both houses and the presidency. Cheap labor loving entities convinced them not to.

Obama illegally granted amnesty to 850,000 illegals. He admitted he didn’t have the authority to do so and it was illegal. Despite what they campaigned on, the Reps decided that was too hard, or that Trump was a meany, so they did nothing about it.

Republicans swore they would undo Obama Care if only they won. Well they won, and Obama care is still here.

There was obvious and massive fraud in the 2020 national elections. Republicans did nothing about it and have done nothing about it. The fraudulent voting apparatus is still out there waiting for the next go.

There are still 700+ Americans in jail awaiting trial for 6 Jan events, most on misdemeanor charges. 17 months for some of them. Right to a speedy trial my butt. The Republican party has allowed the Dems to cow them into submission over it.

Yeah, the Dems are horrific and may well eventually take this country down, but that will be in large part because the Reps weren’t interested in stopping them when they had the chance(s).

The question was about trust, and I’ll trust them when they earn it. When they put the republic and its people before themselves. Not before.

Nearly 2 million people were encountered by federal law enforcement while attempting to enter the United States illegally over the past year.

Data released Friday afternoon by U.S. Customs and Border Protection shows that federal law enforcement officials stopped 1,956,519 noncitizens who tried to gain entry to the U.S. by walking across from Canada or Mexico, entering by way of the Atlantic or Pacific coasts, or passing through an air, land, or sea port.

The large majority of the 1.9 million, 1.66 million, were stopped by the Border Patrol, whose officers work in the land between ports of entry. That is close to the highest number seen over the past century.

Before Biden took office we had somewhere between 25 and 40 million illegal aliens in the US. Having kids who are declared “US citizens” and collecting welfare. Overrunning schools with kids who can’t speak English. Etc. etc etc.

George W. Bush was every bit as bad as Biden and the problem is no bigger now than it was then. More people crossing now? Probably, but the bottom line is that nowhere in government is there any desire to stop the attackers who are, and have been for three decades, streaming over the border. There is not one person in the GOP leadership – for the past 30 years – who stood against open borders. Not one.

There is NO issue the Republicans have not caved on. They worked diligently to undermine Donald Trump on a daily basis. They’re working just as hard to undermine the 2nd Amendment. You’re absolutely right about immigration.

While we’re at it, they marched in lockstep with Democrats over a stolen election and have done nothing to protect election integrity.

When the civil war starts, the first people who should hang from flag poles are leadership of the GOP.

Even the great Ronald Reagan fell for the leftist shtick on illegals. In 1986 he signed the ‘Immigration Reform & Control Act’ which granted amnesty to millions of illegal aliens in exchange for a handful of magic beans. It had a predictably huge effect on encouraging further illegal immigration while enacting laws where employers were supposed to be the enforcers of our immigration security rather than the govt.

20 million plus illegals later the left still calls for “immigration reform” while ensuring there is no actual bar to illegal immigration. Heck, even Bill Clinton made big speeches about ending illegal immigration, but with zero actual results of course.

As you pointed out, under Trump the Reps actively fought their own president to prevent the construction of the border wall. Eleven Rep Senators and 8 Rep Congressmen actually voted AGAINST funding Trump’s wall. Funding that they had voted FOR (but never actually spent) in 2006.

We need to keep tying this to all the Democrats. This is not just Joe. It may not even be primarily Joe since he isn’t really there anymore.
Don’t let them slither out of this. They did this and they did it on purpose.
If you don’t like it you can’t vote for any Democrat no matter how “moderate” they appear.

The questions are “who do you trust more” and zero is greater than negative numbers.

1. Polling is nice. It is usually heavily biased to the Left, because pretty much the entire MSM and the polling companies are, but since polls do not control who is in power, there is a wider spread of results.
2. Voting differs a bit. Right now, there is severe suspicion that the process is fatally compromised, and that the combination of slack control of the integrity of the process [intentional], the control of much of the process by Leftists, and the continuing use of the compromised and owned Dominion systems means that both polling and the wishes of the people are pointless and have no effect on the allocation of power.

Huh. It looks like the issues that matter most to folks in the media are the very same ones that the population in general considers Democrats to be stronger on.

These are the issues the population in general considers to be most important Irv.

And in the real world, a Republican sweep of House and Senate races will do nothing on crime – that’s a local problem. The one crime issue they could confront is the fact that federal law enforcement is, and has been for decades, a criminal cartel. They won’t touch that with a ten-foot pole.

Foreign policy? Other than maybe being a little nicer to Israel and not enabling Iran there isn’t much difference between the parties.

Border security? I’m missing anything about the GOP doing a damn thing to secure the border. Donald Trump tried and it was a declaration of war against him by the GOP leadership.

Inflation? Is a GOP congress going to CUT spending or cut off Democrat cash dumps? They never have. Are they going to control the Federal Reserve? Not a chance in hell.

Yeah, there will likely be a big turnover in November. New faces, old leadership, nothing changes.

And meanwhile people are sick of the RINO bullshit.

Cornyn got resoundingly booed at his latest appearance.

The more McConnell is the face and voice of the GOP Senate, the less we should expect from any election.

McCarthy will be more of Paul Ryan.

McCarthy is more malleable, though, and he’ll bend to the will of the people if we are loud enough about it. I don’t care what he believes personally; I do care that he listen to the GOP base.

except on gun control.

I’m curious as to how the respondents distinguished between “election integrity” and “election cheating.” Does anybody really think that “whoopsies” are a major election problem?