The law is clear: “No person shall be qualified to register for and vote at any election unless he is a citizen of the United States and is or will be, on the day of such election…” 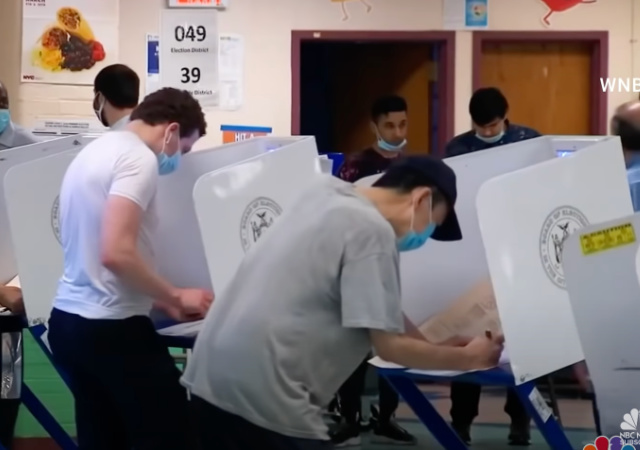 The New York Supreme Court of Richmond County struck down New York City’s “Our City, Our Vote” bill allowing non-citizens to vote in local elections. It includes “those with green cards and Dreamers who have lived in New York City for at least 30 consecutive days.”

The Court pointed to the New York Constitution:

Every citizen shall be entitled to vote at every election for all officers elected by the people and upon all questions submitted to the vote of the people provided that such citizen is eighteen years of age or over and shall have been a resident of this state and of the county, city, or village for thirty days next preceding an election.

The Court also reminded NYC that “the Municipal Home Law sets forth the powers of local governments to adopt and amend local laws in accordance with Article IX of the New York State Constitution.”

The Article defines people as, “Persons entitled to vote as provided in section one of article two of this constitution.”

Entitled to vote: “…eighteen years of age or over and shall have been a resident of this state and of the county, city, or village for thirty days next preceding an election.”

The New York state election law pretty much mirrors the state’s constitution: “No person shall be qualified to register for and vote at any election unless he is a citizen of the United States and is or will be, on the day of such election, eighteen years of age or over, and a resident of this state and of the county, city or village for a minimum of thirty days next preceding such election.”

You’re not your own state, NYC. You belong to New York state.

This is very good ( surprising) but very good.

Hope it starts a trend

Recognizing the purpose of constitutions – to limit the government.

It should be seen when Obergefell gets challenged.

Alito laid out the format in Dobbs as to how Obergefell will be excised out of the law books. Those appendices, A and B, listing out all the state statutes prohibiting/restricting abortion before 1973, were devastating in demonstrating that abortion was NEVER in our traditions.

The same can be done on homosexual statutes, pre-2015, the year when the Court arrogated to itself, in the same manner as it did in “proclaiming” Roe, to find this right to same-sex “marriage” in the Constitution notwithstanding the complete and utter absence of this topic in the document.

I’m looking forward to another day of liberal dismay, along with last Friday, and, who can forget, November 8, 2016.

What’s especially grating about Obergefell was how completely unnecessary it was. Pretty much every state by then had established, or was on the way to establish, some form of reasonable accomodation for nontraditional relationships through civil union licenses. But that wasn’t enough for the crybullies.

heh, maybe now the city will ask to decouple itself from upstate, and upstate can return to sanity.

Hell no, then they’re going to want two senators.
Ha ha, I know, it was a joke. They already have them.

Clarity matters little to those pretending to represent democracy and the rule of law.

Wow, a common-sense ruling based in law from a NY court? Is Hell freezing over?

Will the city appeal? Maybe but they will almost certainly lose because the explicit text of the NY Constitution doesn’t allow the city to do what they seek.

New York City has never appealed. At least not to me.

That is correct and an important point. The New York “Supreme Court” corresponds to district or superior courts in other states. The Court of Appeals in Albany corresponds to state supreme courts elsewhere.

However, you might be surprised by a Court of Appeals decision in this matter as that court has been on an ornery independent streak lately. Consider the blatant hyper-partisan congressional district map foisted by the Dems in the legislature contrary to statutory and constitutional provision. The Republicans, in one of their shrewdest moves so unlike the “stupid party” reputation, brought suit against the plan in supreme court in a solidly red county (Steuben). A Republican judge threw out the plan. The Dems appealed, and much to everyone’s surprise, the lower court decision was upheld on a 4-3 vote by the Court of Appeals–ALL of whose members were appointed by Dem governors. I’ll be watching progress of this case carefully.

They may be shocked by unelected Gov. Hochul’s aggressive radical agenda and want to have a state left at the end of her time in office.

Wasn’t long ago when we couldn’t win cases like this even in “conservative” states. The momentum is certainly shifting when we are winning big in deep blue states. Maybe we will finally witness all of those Hollywood leftists actually make good on their threats to recant their US citizenship and residence and actually leave. We are trying to run a civilization here.

In many cases they wouldn’t even be argued — the petitioners would be found to lack standing and that would be that.

SCOTUS is definitely moving the ball. Lots of wins for sanity and original meanings.

Vega blew open Miranda by insisting that the only remedy for a Miranda violation is exclusion at trial. No more lawsuits for $ damages over this, just exclude the statement.

The final case to watch IMO is the EPA case out of WV. The CT may take the opportunity to roll back the administrative state by limiting agencies scope to explicit delegation of power and authority v here where EPA is attempting to invoke authority they were not explicitly given by Congress because it fits their policy preferences

We have lots to celebrate this term.

Well, it may be happening:

I suspect there are not many truckers doing such a Google search.

In Canada they have a history of post-birth “abortions” of Indian (First Nations) children.

It’s been a funny sort of week, hasn’t Sean?

The NY legislature is pushing in the other direction. They passed a bill that apparently requires preclearance for some local voting rules changes. https://www.governor.ny.gov/news/governor-hochul-signs-landmark-john-r-lewis-voting-rights-act-new-york-law

I am still trying to find a text for the bill or even what jurisdictions are targeted for preclearance, is my area included?? What I do know is that in my previously purple area, since 2017 no Republican has been able to win anything, and I’m really wondering if something is funny about the vote counting.

The announcement even mentions the Lt. Governor who “due to voting” was able to represent a 90% white district in upstate. Was it voting, or vote counting?

The text is available here https://www.nysenate.gov/legislation/bills/2021/S1046

The definition of who has to go for preclearance includes any place where any minority group gets arrested at higher rates than others. This is the whole thing. It never ends, if you are hauled into court on an elections case, you get put on the preclearance list for 25 years. Or, if your district has racially separate housing (the census “dissimilarity index” you also get put on the preclearance list. Sorry for spamming it here, but it’s egregious, and it’s NY law, although to pacify the opposition, the implementation of preclearance is delayed a few years.

Elephants are NOT people, and only US citizens can vote. NY State Supreme Court is, apparently, tired of liberalism

If it were to be found for whatever loophole they my put forth, and could be up held, all the counties north of Orange would have a populace of those who reside there, overjoyed to finally shed themselves of all that area to the south inclusive of NYC. That area which rules all of our state government and manages to have the state run for their exclusive benefit. Free…. Free At Last!