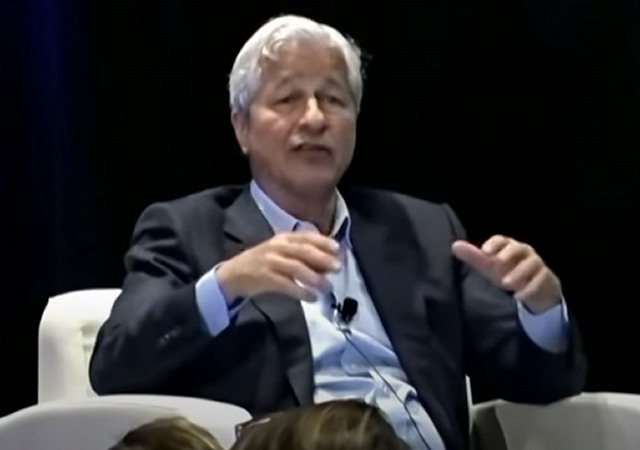 The country is already reeling from inflation, rising gas prices and shortages, but don’t think things can’t get worse. Jamie Dimon, the CEO of JP Morgan recently told investors and analysts that a “hurricane” is coming for the U.S. economy.

This is just what you wanted to hear, right?

JPMorgan Chase CEO Jamie Dimon says he is preparing the biggest U.S. bank for an economic hurricane on the horizon and advised investors to do the same.

“You know, I said there’s storm clouds but I’m going to change it … it’s a hurricane,” Dimon said Wednesday at a financial conference in New York. While conditions seem “fine” at the moment, nobody knows if the hurricane is “a minor one or Superstorm Sandy,” he added.

“You’d better brace yourself,” Dimon told the roomful of analysts and investors. “JPMorgan is bracing ourselves and we’re going to be very conservative with our balance sheet.”

Beginning late last year with high-flying tech names, stocks have been hammered as investors prepare for the end of the Federal Reserve’s cheap money era. Inflation at multidecade highs, exacerbated by supply chain disruptions and the coronavirus pandemic, has sown fear that the Fed will inadvertently tip the economy into recession as it combats price increases…

“Right now, it’s kind of sunny, things are doing fine, everyone thinks the Fed can handle this,” Dimon said. “That hurricane is right out there, down the road, coming our way.”

Dimon is not the only person who’s saying this.

“This is among — if not the most — complex, dynamic environments I’ve ever seen in my career,” Goldman President John Waldron said at an investor conference Thursday. “The confluence of the number of shocks to the system to me is unprecedented.”

Waldron’s comments echoed the stark warning on Wednesday from Dimon, JPMorgan Chase & Co.’s chief executive officer, who warned investors to prepare for a “hurricane” amid an unprecedented combination of challenges. Waldron said he’ll avoid “using any weather analogies,” but spelled out his fear that risks from inflation, changing monetary policy and Russia’s invasion of Ukraine could kneecap the global economy.

“We expect there’s going to be tougher economic times ahead,” Waldron said. “No question we are seeing a tougher capital-markets environment.”

It’s scary to think about how bad things could get.

Hurricane? Not even close.

Think war. In the grocery store.

The latest I saw was that baby formula outage was rated 74% average with the highest at 94% (by state). I also saw that diesel fuel was expected to be in short supply, which would further disrupt the supply chain. As Obama reportedly said, “Don’t underestimate Joe’s ability to (expletive) things up.” People are also underestimating how far the stock market might drop. Bad problems and zero confidence in government’s ability to do anything right is a prescription for eventually very bad psychology, which could drive consumer spending and financial markets into a ditch.

Combine it with how a lot of young people don’t know how to make their own. Also, they (we) are conditioned to be distrustful of anything not “official”.

There is a mandated additive to diesel which is now scarce. Instead of waiving this requirement the admin has just announced more ethanol in gasoline. jeesh

Absolutely correct.
Arm up and get ready. There WILL be riots, attacks on statehouses, the whole bit.
Stay Locked, Cocked and Ready to Rock.

So this Hurricane isn’t “transitory”?

Yes, we need a Greek oracle to tell us this. Our money God speaks in parables so we may understand.

When 10 million people decide to live in their cars because they can’t afford rent anymore, the media will praise Biden for solving the housing crisis.