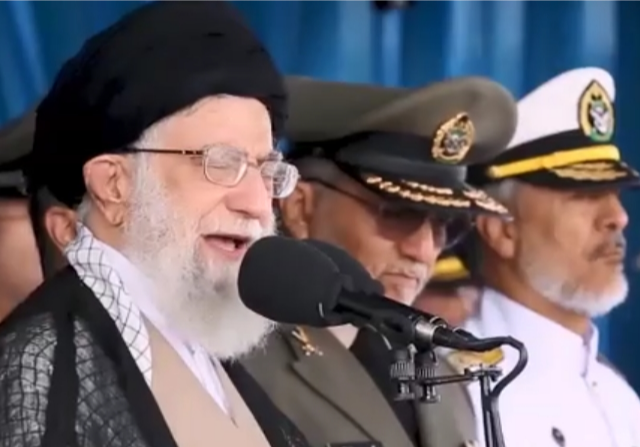 News reports say that the Iranian regime fired the IRGC’s intelligence chief and arrested a senior IRGC commander on a charge of spying for Israel.

Hossein Taeb, who reportedly masterminded the recently foiled terror plot to kill Israeli nationals in Turkey, has been fired from the post of IRGC’s intelligence chief.

The Times of Israel noted, “Taeb was identified by Hebrew media last week as the Iranian official behind planned attacks on Israelis in Turkey.”

“The reports, citing Israeli security officials, said that Taeb was under intense pressure to carry out an attack, amid growing frustration in Iran over repeated Israeli successes in penetrating Iran’s most secret organizations,” the Israeli news website added.

Taeb’s plot was foiled last week after Israeli intelligence warned the Turkish authorities of an impending terror attack that led to the capture of several Iranian and local operatives in Istanbul.

The other major event that rocked the regime’s security apparatus was the arrest of IRGC Brigadier General Ali Nasiri on charges of spying for Israel, The New York Times reported Wednesday, citing Iranian regime sources.

News reports suggested that the general’s arrest could be linked to a major security breach linked to the regime’s missile program. The newspaper Israel Hayom noted Wednesday that “two months before Nasiri’s arrest several dozen employees of the Iranian Defense Ministry, who worked on developing its missile program, were detained on suspicion of leaking classified information to Israel.”

The Islamic Guard oversees the nuclear weapons program and the development of nuclear-capable missiles.

Iran has dismissed the powerful chief of the Revolutionary Guards’ intelligence unit, Hossein Taeb, Iranian state TV said on Thursday, after a series of high-profile incidents Tehran has blamed on its arch-foe Israel.

Iranian state media did not give a reason but state TV said Taeb would become an adviser to the Guards’ Commander-in-Chief Hossein Salami. Taeb will be replaced by Mohammad Kazemi, previously head of the Guards’ Intelligence Protection unit. (…)

Taeb, a mid-ranking cleric and a member of Iran’s Supreme Leader Ayatollah Ali Khamenei’s inner circle, was accused by some Israeli media of being behind an alleged Iranian plot to kill or abduct Israelis vacationing in Turkey. Israel raised its Istanbul travel advisory to the highest alert level on June 13.

The recent assassinations of senior IRGC operatives and scientists linked to its ballistic missile program have shaken the regime’s faith in its massive security apparatus.

The regime’s top brass blames Israel for these incidents. “The security breaches in Iran and the scale of Israeli operations have completely undermined our most powerful intelligence organization,” Iran’s former Vice President Muhammad Ali Abtahi admitted to the NYT.

The IRGC intelligence chief is not the only one fired from his job. A “wide wave of dismissals has hit the Islamic Guard,” and internal rivalries may also drive this purge, the Jerusalem Post reported quoting Arab media.

“Iran’s Islamic Revolutionary Guard Corps is reportedly cleaning house after a series of intelligence failures, including IRGC officers who have been assassinated in Iran, or died under mysterious circumstances, becoming “martyrs” in the terminology of the Iranian regime,” the Israeli newspaper reported Monday. “The IRGC is now toppling its own in a mini-purge that could be part of rivalries or an internal coup, or simply be the need to get rid of the old and bring in the new,” the daily added.

Having dealt with this before it strikes me as unbelievable that Iran would “fire” someone (unless we were talking about immolation) for assisting their most hated “Spiritual” enemy.

That’s not how things are routinely done over there.

Hmmm. Sounds like an outbreak of paranoia. I wonder how the Israelis are getting to them.

I agree. “Israeli operations have completely undermined our most powerful intelligence organization.”

1) More likely it is regime incompetence.

2) Most certainly Israel is running false flag operations, making loyal Iranians look like they are spies. Good job, this will terrorize rank and file and demorialize them.

i have stated many times that many of the attacks could not be carried out without a lot of Iranian help but had no idea that it was people that high up.

At least, an answer to the age-old question:
If a tree falls in the forest, can the desert have a swamp?

If gas guzzling dinosaurs ruled the earth for 165 million years before being wiped out by global warming, how much longer do we have?

How much methane did they discharge?

They got their revenge on the left by decomposing into evil petrochemicals.

The significance of that question will fully mature with the passage of time.

We will work together now and continue working together as we tackle answering that significant question which will be the equinox of our togetherness while working toward the common objective which is our ultimate goal as the passage of time allows.

Taurus, do you write speeches for our esteemed Vice President?

I wouldn’t think so. The Judge writes much more smoothly and coherently than that. Furthermore, if you took the above speech writing at the 12th grade level, you would have to have to have all the big words removed, then bastardized, glossed over, wrinkled, folded, spindled and mutilated before handing it to Kamala to regurgitate.

For that question, one of the points you raise that has been presented as a question which is germane to the communicative proclivities of our esteemed Vice President is really part of a larger subset of germane interrogatories regarding the effects and forethought our leaders employ when disseminating information to the masses in form and fashion developed for maximum benefit of the audience.

Whe speaking of the passage of time, I always think of Groucho Marx:

You don’t know how many times I heard those lines in college AI lectures about the challenges of natural language processing.

Yeah, I’ll bet they don’t teach those classes any more.

Don’t need to.
In my day, progress was overcoming challenges — not creating new, unnecessary ones.

The only thing in total disarray is the “weird beards” control of Iran! The oppressed people of Iran deserve a democratic form of government and need to rise up and take control!

What a lovely thought, that an Iranian General officer might be influenced by God instead of Satan.

If they really thought he was an Israeli spy, they’d have shot him already

An alternative view of the problem: Islamic Mullahs Have.Completely Undermined a Country.

Always delighted to read of the mad mullahs eating their own. Pray they have a lovely and bountiful feast and feed the scraps to the dogs.

The big shot has an exec officer, a senior sergeant, a driver, and a clerk.

“Don’t try to tell me they never heard anything!”

So it goes. Eat themselves up from the inside.