Report: IRGC Colonel falls “from the roof of his home” following interrogation over recent assassination of fellow operative. 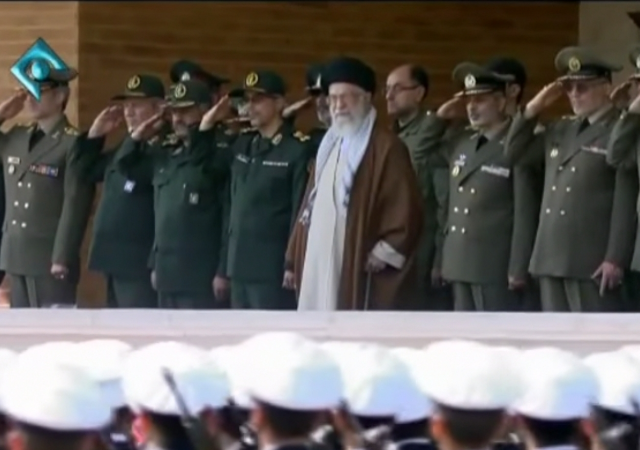 A senior Iranian Islamic Guard (IRGC) operative and a rocket scientist have died under suspicious circumstances days after a leading member of the IRGC-Quds terror outfit was assassinated outside his heavily-guarded home in central Tehran.

Ali Esmailzadeh, who held the rank of colonel in the Islamic Revolutionary Guard Corps (IRGC)—a U.S.-designated terrorist group—died this week  after “falling from the roof of his home” outside Tehran, the Jerusalem Post reported.

The second victim, Ayoob Entezari, an Iranian military-linked aerospace engineer, reportedly died of “food poisoning” on Tuesday, the news reports said. Entezari, who had a PhD in aerospace engineering, “worked on developing missiles and drones,” The Times of Israel reported Saturday.

It is unclear if the two deaths are related or whether these individuals were in any way connected to the assassination of the IRGC-Quds operative, Hassan Sayyad Khodaei, which took place late last month. However, a dissident-run news outlet Iran International claims that slain IRGC Colonel Esmailzadeh was suspected of “leaking information that led to the assassination of his fellow” terror operative Khodaei. Both served in IRGC-Quds’ Unit 840, which carries out terrorist operations outside Iran.

Khodaei was reportedly responsible for several terrorist attacks on Israelis and Jews across the world, including a series of embassy bombing in February 2012, which targeted Israeli diplomatic missions in India, the Republic of Georgia, and Thailand, Israeli media reports disclose.

The Jerusalem Post reported the mysterious killing of the IRGC member:

An Iranian Quds Force officer died under mysterious circumstances earlier this week after he was suspected of leaking information that led to the assassination of his fellow IRGC officer in May, Saudi-backed news outlet Iran International reported on Thursday evening.

The officer, reportedly identified as Colonel Ali Esmailzadeh, died on Monday after falling from the roof of his home in Karaj, near capital Tehran.

He was taken to a local hospital after his fall, where he was pronounced dead. As per Iran International, Esmailzadeh’s family was told by the IRGC that he killed himself due to “psychological problems caused by separation from his wife,” with an alleged letter left by the colonel backing up that claim.

Like Khodayari, Esmailzadeh was reportedly also a member of Quds Force’s Unit 840, a secretive unit responsible for terrorist operations against Israeli and Western targets outside of Iran.

IRGC intelligence officers reportedly suspected information leaked from inside the organization led to Khodayari’s assassination and were looking for potential informants inside Unit 840.

Esmailzadeh, reportedly a “close associate” of the slain officer, was interrogated and suspected of giving information to Western intelligence services.

According to Iran International, the IRGC then quickly moved to dispose of the accused officer by staging his suicide.

The slain rocket scientist is not a member of the IRGC, but Iran’s missile development is deeply embedded with the country’s rogue nuclear weapons program. The IRGC is spearheading the regime’s efforts to acquire nukes.

A scientist died in Iran this week under mysterious circumstances, according to Iranian reports cited by Hebrew media on Saturday.

Ayoob Entezari, who held a PhD in aerospace engineering from Sharif University of Technology in Tehran, died on Tuesday, the reports said.

He was reportedly employed at a research and development center in the city of Yazd, where he worked on developing missiles and drones.

The Iranian regime vowed to avenge last month’s killing of its terror operative and placed the blame on Israel. Following the assassination, Iranian President Ebrahim Raisi declared that “the revenge for pure blood of our martyr will be taken.”

Thousands of regime supporters gathered in Tehran for the funeral of the terror mastermind, and chanted angry slogans against the U.S. and Israel. “Thousands of mourners poured into the streets of Tehran (…), punching the air with their fists and chanting ‘Death to Israel,’” The Associated Press reported. “The funeral procession snaked through the main Tehran cemetery as mourners shouted anti-U.S. and anti-Israel slogans,” the news agency added.

I’ll drink to that.

You really hate to see that IRGC on IRGC action …

I’m so old, I remember when Mr. Briggs and Mr. Phelps worked for us.

You gotta give it to teh juices! Their tenacity, patience and ingenuity when it comes to whacking bad guts is legendary. I mean who will ever forget the classic explosives in a phone trick 🤣🤣

A better one was on an episode of Dial 999. Something activated a device in the handset on telephones it stuck a needle covered with curare in the ear of the victim.

Every bit is deadly, and far easier to clean up.

I haven’t done anything, officer.

-It’s okay, we just want to ask a few questions, on the roof

“and then there were eight little indians………”