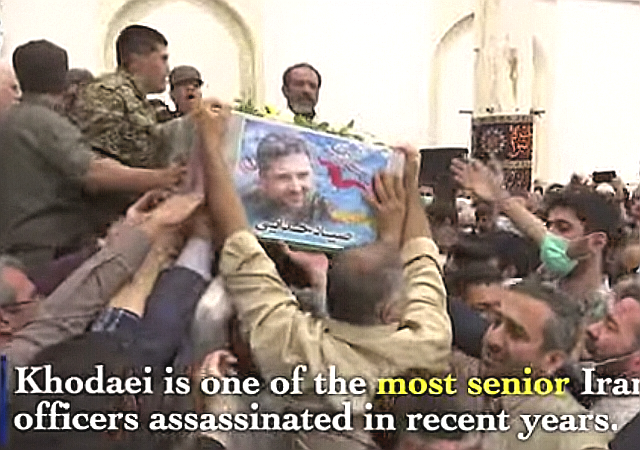 The Iranian Quds Force terrorist operative, who was gunned down in central Tehran two days ago, masterminded a series of bomb attacks on Israeli diplomats, Israel’s Channel 13 TV network reported.

Hassan Sayyad Khodaei, who held the rank of a colonel in Iran’s Islamic Revolutionary Guard Corps (IRGC)-Quds Force, was killed by two unidentified gunmen outside his heavily-guarded home in Tehran, Iranian state TV reported Sunday. The IRGC is a U.S.-designated terrorist organization, and the elite Quds Force carries out its global operations.

The slain terror operative was behind a series of attacks on Israeli diplomats, including the 2012 embassy bombings in India, the Republic of Georgia, and Thailand. “Col. Hassan Sayyad Khodaei, the senior Revolutionary Guard member who was assassinated Sunday in Tehran, was involved in a 2012 terrorist attack in New Delhi in which the wife of an Israeli security official was injured, authorities revealed Monday,” the Israeli news outlet Ynet disclosed.

The Times of Israel reported Khodaei’s role in terrorist activities against Israel:

The Iranian Revolutionary Guards colonel who was shot dead in Tehran on Sunday was behind a series of attacks on Israeli envoys in several countries in 2012, according to a report in the Iranian opposition media outlet Iran International.

According to the report, Colonel Hassan Sayyad Khodaei, who was assassinated in the heart of Tehran, was responsible for a 2012 car bomb targeting an Israeli diplomat in New Delhi, which injured the envoy’s wife. Khodaei was also reportedly behind a series of botched bombings a day later in Thailand aimed at killing Israeli envoys.

Tehran has vowed to avenge the assassination, but stopped short of directly blaming Israel. Unsourced Hebrew media reports claim that intelligence shows that only a foreign body could have carried out such a brazen attack on Khodaei.

In early 2012, IRGC and Hezbollah terror operatives plotted a coordinated attack on Israeli embassies in India, the Republic of Georgia, and Thailand.

On February 12, 2012, an unidentified motorcyclist attached a magnetic explosive device to an Israeli diplomatic vehicle on a busy New Delhi street. The blast seriously wounded the wife of the Israeli defense attaché and three other people.

Several Iranian nationals were arrested for the Bangkok attacks. The perpetrators of the New Delhi bombing were never brought to justice.

The Iranian regime threatened the United States and Israel with revenge attacks for the killing of their senior terror operative. On Monday, Iranian President Ebrahim Raisi vowed that “the revenge for pure blood of our martyr will be taken.”

Thousands of pro-regime followers gathered in Tehran to pay their last “respects” to the murderous terrorist. “Thousands of mourners poured into the streets of Tehran on Tuesday (…), punching the air with their fists and chanting ‘Death to Israel,'” The Associated Press noted. “The funeral procession snaked through the main Tehran cemetery as mourners shouted anti-U.S. and anti-Israel slogans,” the news agency added.

Thousands attended the funeral Tuesday of an Iranian Revolutionary Guards colonel who was shot dead in Tehran in what authorities have dubbed an “assassination” by agents of the United States and its allies. (…)

A large crowd gathered Tuesday morning at the Imam Hossein Square in central Tehran to pay their respects to the colonel, with many raising pictures of other “martyrs” killed abroad.

Nearby, a billboard vowing a “harsh vengeance” for Khodai was erected alongside a portrait of General Qasem Soleimani, a revered Quds Force commander who was killed in a US drone strike in Iraq in January 2020.

The ceremony began at around 8:30 am (0400 GMT) with the national anthem and Koran recitations, followed by religious chanters paying tribute to the slain colonel.

Similar threats were issued by the Iranian regime after Khodaei’s boss, Qassem Soleimani, was killed in a 2020 drone strike ordered by President Donald Trump.

In January 2021 — coinciding with Soleimani’s first death anniversary, the Quds Force carried out another bomb blast outside the Israeli embassy in New Delhi. The hands of the IRGC-Quds Force in the terrorist attack were confirmed by the Indian investigators.

Iran seems to be falling apart and Israel has taken advantage of the breakdowns.

Iran has always been a failure since the Shah was removed.
In a sane world the Israelis would view all of this as an act of war, and react accordingly. But we do not live in a sane world. We live in one where the action and reaction is akin to playacting, and innocent people pay the price.

Israel does some things so right

Then they are so insane with Covid and I read somewhere they are all in for ID implants and such, just stroll right up and be implanted sand. Have all your info uploaded
Sorry your social score is low, no loan for you or passport!

It’s not good to put all your Quds in one basket.

Peabody’s Qud-Tip of the day.

Another tip: don’t put Qud-Tips in your ears.

“ Thousands of mourners poured into the streets of Tehran on Tuesday (…), punching the air with their fists and chanting ‘Death to Israel,’”

Sounds like a lot of targets in the streets.

A memorial service for for the martyr Hassan Sayyad Khodaei will be held in the Rose garden of the White House on Friday after Friday prayers.