I’m So Old, I Remember The Attempted Assassination of Justice Brett Kavanaugh

I’m So Old, I Remember The Attempted Assassination of Justice Brett Kavanaugh

The Democrat political and media non-reactions to the attempted assassination of Justice Kavanaugh make it more likely targeted political violence will return. 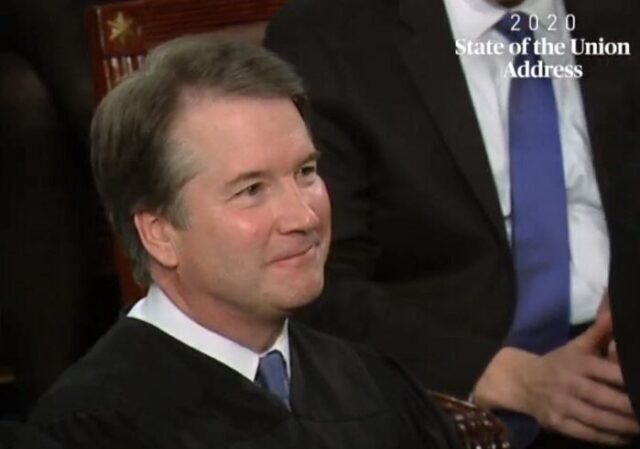 At least two amazing things resulted from the attempted assassination of U.S. Supreme Court Justice Brett Kavanaugh by a man angered at a leaked draft opinion overturning Roe v. Wade, and potential ruling protecting 2nd Amendment rights. An attempt in which the would-be assassin arrived at Kavanaugh’s home, but was deterred by the presence of two U.S. Deputy Marshals. The assassin and assassination got “that” close.

Amazing thing number 1 – The media buried the story. Yes, it was reported in major publications, but nowhere near what it would have received had it been a “right winger” arriving at the home of a liberal Justice with intent to kill. The President of the United States, whose office has nodded, winked, and encouraged protests at Justices’ homes, has only issued a single cryptic statement about the incident, and then only after weeks passed. There has not been a “national conversation” about this profound threat. The media moved on quickly because that would-be assassin shared their views on abortion and gun control. It’s almost like it never happened. But I’m so old, I remember it.

Amazing thing number 2 – I agree with a key point in this June 8, 2022, column by Jeremy Shulman in leftwing Mother Jones about the assassination. I bookmarked it, and have been waiting to write about it, The Assassination Plot Against Brett Kavanaugh Is a National Emergency. Here’s the key point (with gratuitous and obligatory side swipes at Trump omitted):

But I do know this: We apparently just came unacceptably, terrifyingly close to catastrophe. The assassination of a Supreme Court justice would be a personal and national tragedy. But it would be more than that. It would be a threat to American democracy…. It’s simply impossible to imagine how a high court torn apart by violence could function in a way that Americans accept.

Political assassinations are a thing I remember growing up in the 1960s. The Democrat political and media non-reactions to the attempted assassination of Justice Kavanaugh make it more likely targeted political violence will return, and I’m talking about more than the now-common riots and looting. I don’t think people realize how “terrifying close to catastrophe” we are every single day.

That’s when “the whole world’s watching” was heard in Chicago.

It feels worse than 1968, however I was young amd probably more aligned with the left then

I lived in milwaukee, was going to go down to Chicago to check out the “demonstrations”

I remember the race riots, summer of love..

I was a good deal to the left but still felt Hoffman and his crowd were fools.

I don’t know what the response to the killing of a Supreme court justice by the left would be but I can believe that it would be unprecedented. A President is set to be replaced by someone with a somewhat similar philosophy. But currently since the left side of the judicial and legal system no longer believes in the constitution anyone put on the court by a Democrat would change everything. Things that the conservatives in our country have work to achieve for years. I don’t see how that would just be accepted.

Yes replying to myself:
The election of Trump in 2016 saved the 1st and 2nd amendments outright. That is what I mean by the left legal system not believing in the constitution.

And now, thanks in no small part with the “conservatives” embracing of Matthew McConaughy’s emotional call for “meeting in the middle”, the Cocaine Turtle and his gang of 19 are poised to enact a Trojan Horse infringement on our 2nd amendment by way of ignoring the 4th amendment. Too many traitors in the Uniparty. Thank God for Trump.

I had a long conversation with Senator Coryns “assistant “ today…

Lying liars going to lie is all I can say

Cornyn got the message, loud and clear, which is why he suddenly decided yesterday that he really didn’t like red flag laws after all.

Cornyn knows that the Republican Party base regards him as a traitor. He got THAT message, but that does not mean that he does not like red flag laws, or confiscation. He just knows that he has to pretend.

I didn’t mean to imply that he actually meant it.

He didn’t. Quoting Cornyn after he finished his speech at the TX GOP Convention:

So is now referring to his own Republican conventioneers as a “mob”. What hubris. What arrogance. We could pretty much hang every Republican senator and be better off. Let God sort them out.

Phil: The problem with that theory is that we’d be left with nothing but Democrat senators. If nothing else, at least the Republicans (most of them) are effective in blocking the worst of the left’s insanity.

I hope each of us has contacted those senators that went along with it. I know I have.

Show of hands of those who are going to watch the Dems tonight pretending that Nixon did what Hillary actually did.

Joe gets shot by a patsy with an AR. Media goes full rage, Kamala signs EO banning guns.
Hold on.

You have to understand that in the current form of the American legal system, attempting to assassinate anyone to the right of Trotsky IS NOT A CRIME. Refusing to eagerly submit to decrees by the Left, or supporting the Constitution is.

Assassination of a Supreme Court judge, and who gets to choose the replacement?

It’s court packing by a different method. This is why the left isn’t bothered.

Would go-fund-me allow donations to send Kavanaugh to Gunsite Academy?

Short cartoon about what the would be assassin’s motives may have been.

Nothing yet on the leak, not that t hink anything ever will be known.
The Democrat/Marxists if a SC was assassinated would shed a fake tear, decide on another Marxist to take their place and rejoice.

The biggies have to be announced on those days.

Unless the Court kicks the can down the road.

The leak happened on May 2, seven weeks ago. The biggest of the biggies, had Roberts had any brains, should have been released at once to diffuse the situation.

It’s important to keep in mind that Roberts is probably still hoping to swing at least one vote to keep Roe v Wade intact. Traitors everywhere. And people keep telling us that Trump is the guy who makes bad appointments. Sure seems like that is just the way Republicans have been doing things for too long.

June 27 would be appropriate. That date is the famous date from Shirley Jackson’s memorable short story, The Lottery (1948),

The morning of June 27th was clear and sunny, with the fresh warmth of a full-summer day; the flowers were blossoming profusely and the grass was richly green. The people of the village began to gather in the square, between the post office and the bank, around ten o’clock.

Bill Hutchinson went over to his wife and forced the slip of paper out of her hand. It had a black spot on it, the black spot Mr. Summers had made the night before with the heavy pencil in the coal-company office. Bill Hutchinson held it up, and there was a stir in the crowd.

Although the villagers had forgotten the ritual and lost the original black box, they still remembered to use stones. . . .”

Isn’t it a bit strange the identity of the leaker has not been revealed?

Could it be that one of Roberts’ clerks or Roberts himself are the ones who leaked?

I do not think that it is strange, because IMO Roberts does not want the leaker discovered – too disruptive. He is just posturing. If he was serious, he would have called in the FBI immediately.

As to this article, the Democrats and MSM want more political violence and are looking forward to riots after an unfavorable abortion decision. Anything to get inflation, gas prices and Biden’s incompetence off the front pages. They even get to play both the “racist” and “anti-woman” cards, since Black women are disproportionate users of abortion.

“…since Black babies are disproportionate victims of abortion.”

Nothing yet on the leak, not that t hink anything ever will be known.

A leak by, or at the direction or with the tacit agreement of, one of the Justices would be both a lot more serious and a lot less serious. In the technical or legal sense it would be less serious because there really is nothing other than tradition that prevents Justices from leaking these matters. I don’t want to minimize that tradition, as it is what enables the court to function in a reasonably collegial way. But it would not necessarily be a violation of an understanding of employment the way it would be for a clerk to leak something like that. On the other hand it would be far more serious as it would represent an intentional destruction of the kind of collegiality that is necessary for any appellate court to function. Any Justice who was found to do something like that would continue to have life tenure but would almost certainly be shut out of discussions of any cases until opinions by other Justices were finalized and ready for release and then given only a yes/no vote

The critical difference between 1968 and now is that today our “leaders” are on the side of the insurrectionists.

The main difference between now and ’68 is that the music was a lot better then.

The year 1968 was Great
Time to make it Great Again

Link to send email to Garland and Biden telling them to enforce the law protecting Supreme Court justices: https://www.afa.net/activism/contact-officials/?vvsrc=%2fCampaigns%2f95675%2fRespond

If the establishment news media don’t report an attempted assassination, did it actually happen?

Now, everyday is the left’s “Days of Rage”, much like what precipitated the 1968 Chicago Riots (when the marxist Weatherman first got organized).

Now, incredibly, those fuctards are actually in charge of stuff.

If domestic and foreign policy were to be left up to people like Jeremy Shulman of leftwing Mother Jones, the results surely would be a personal and national tragedy.