So did Biden know about the problems the recall would cause in February or did he truly only find out in April? Biden and his press secretary imply the admin started working on it right away when the recall happened. 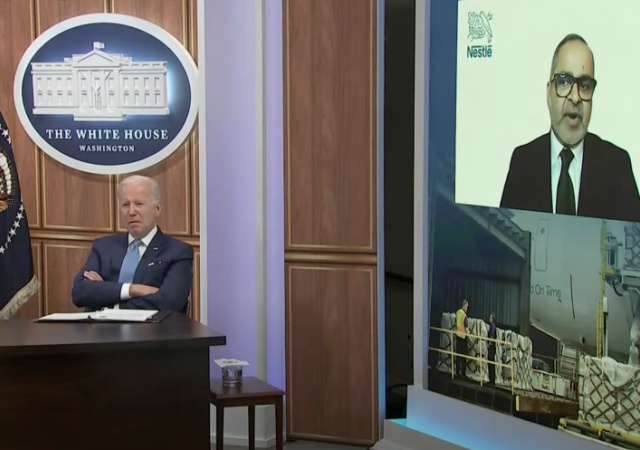 February 2022: Abbott Nutrition recalled products and shut down its plant in Sturgis, Michigan.

April 2022: Biden finds out about the shortage in early April.

May 2022: Biden publicly talks about the shortage.

Biden claimed that no one could have predicted the problems the baby formula recall would cause only moments after many executives admitted they knew right away it would wreak havoc on the country:

“We knew from the very beginning that this would be a very serious event,” one executive said during the meeting.

Abbott Nutrition issued a recall back in February and subsequently shuttered its plant in Sturgis, Michigan, CNBC reported. Despite manufacturers being immediately aware of the impact this would have on baby formula across the U.S., the president admitted he wasn’t aware until later.

“I don’t think anyone anticipated the impact of the shutdown of one facility,” Biden first said Wednesday. “Once we learned of the extent of it, and how broad it was, we’ve kicked everything in the gear [sic]. And I think we’re on the way to be able to completely solve the problem.” (RELATED: Biden Invokes Defense Production Act Amid Nationwide Baby Formula Shortage)

Biden said he didn’t know much about the baby formula recall and shortage until April but starting right then his administration has done all it can to correct the problem.

REPORTER: “Didn’t the CEOs just tell you that they understood it would have a very big impact?”

BIDEN: “They did, but I didn’t.” pic.twitter.com/ge0go5gAPp

So I guess February then, right?

Karine Jean-Pierre appears to have absolutely no idea when — if ever — the Biden White House was warned about the baby formula shortage. pic.twitter.com/iFoTVRRyQ0

"Was someone called here at the White House to say [the baby formula shortage] could be an issue?"

KARINE JEAN-PIERRE: "So I don't have the timeline on that." pic.twitter.com/lozUI5HOEF

DOOCY TIME: "Who is the person in the West Wing who decided after six or eight weeks that this baby formula shortage was finally something that somebody should tell the President about?"

KJP: "Look, again, I have to go back and talk to the President." pic.twitter.com/axlh1nCjg8

Philip Wegmann had the mic drop:

Karine Jean-Pierre to @PhilipWegmann: "All of [these issues] are important to note that there are always multiple crises happening that we are dealing with all at once." pic.twitter.com/wki093R3SO

One notable detail is that in spite of the plant shutdown being such a huge deal when it happen, the communist lackeys in the so called “press” did not report it.
We found out when the shelves got empty and it became impossible to hide the problem.
Journalism is dead.

It didn’t qualify as a people… person interest story. Besides, we were occupied by the Taliban home coming; diversity, inequity, and exclusion policy; the assembly directed as a riot identified with an insurrection; the Green raw deal; reproductive rites for social, redistributive, clinical, and fair weather causes; the Biden/Maidan/Slavic Spring with “benefits”; anti-emigration reform; etc.

There were some stories done by the national media when the story broke, there was no follow up reporting until the shortages in the stores became a serious issue.
AP ran a story in conjunction with CBS ran a story in March.
https://www.cbsnews.com/news/abbott-baby-formula-recall-fda-details/
The government and Abbott had press releases back in Feb.

My guess Sundowner doesn’t know anything unless it’s drummed into his head and put on a teleprompter, and even then he just makes stuff up as he sees fit.

Of course Brandon didn’t have a clue, he’s only a braindead sock puppets he is clueless and yet he remains president.

These idiots are so incompetent. First they’ve claimed that they were aware of the problem and taking all necessary steps, now they’re trying to whine that they didn’t know about the problem.

“Incompetent?” Think about that for a moment: their goal is to destroy all that exists in our culture and our law and replace it with theirs. It’s working for them.

Considering who we have hired in Congress for the past 30 years to defend our nation and our heritage, isn’t WE who are incompetent?

translation: Governing is harder than we thought plus it’s not fair and people don’t appreciate us and how hard we try.

I guess they didn’t find that out until they got there…..

this is what happens when image is more important than competence

Dem thought process (through internal monologue): “Look, we typically only handle one crisis at a time (unless the opposition is in office then we have them ALL under control from the backseat). We are already like superhuman because we can juggle climate change and racism at the same time. They are crises that have like always happened and will always happen until the end of time”

“….important to note that there are always multiple crises happening that we are dealing with all at once.”

That’s why we need a president that can chew gum and walk at the same time.

No, we need a president who is not a corrupt traitor. How hard is that?

Given the Mafia that controls our federal goverrnment, apparnently that’s not possible.

No. that’s why we need a constitutional government which is constrained from micromanaging everyday commerce to the extent that even baby food suddenly fails to be produced unless somebody bothers the freakin’ President of the United States about freakin’ baby food.

Yes, bread is next.

Well of course he had no idea. He’s a senile mental retard.

Well, what do you expect. Brandon was never short of baby formula to mix with his Gerber’s baby cereal and he knew there was plenty for the illegals.

I guess when you’re the Prez, you live in some kind of 5th-order bubble … the dem bubble, the DC bubble, the narrative bubble, the security/intel (plausible deniability) bubble, the polling bubble, etc.

Like being in the intersection of a venn diagram from hell it obviously renders someone a useless blithering idiot.

Sorry … I forgot “the basement” bubble. 😉

He’s plenty useful: if you’re a leftist fascist, or a Chinese Communist.

I think “Biden had no idea” pretty much says it all. About everything.

Aside from the chaos with the WH, I would have thought that Abbot and the FDA would have had a plan when the plant was closed and it would have never needed the President’s input unless to suspend some regulation at the request of the FDA.
But I guess this is another example of the inability of the overextended federal bureaucracy to make rational decisions and plan accordingly.

MDP, our ‘federal government’ apparachiks, whoever they are, have been making very rational decisions – for themselves. We are disposable.

This accepts the premise that the government should be this involved in the production of baby formula. I don’t want the POTUS to even know we have baby formula plants. His main responsibility is foreign affairs and defense.

Well, in this case the FDA contributed to if it didn’t cause the problem, so they should have had a role in fixing what they created.
Whether the fda should exist and be concerned about baby formula is another matter.

Its important to point out that this entire kerfluffle was caused because 2 infants mysteriously died and others were sickened back in February; the FDA reflexively closed the Abbot plant and ordered the recall

The conclusion was that the contamination that caused the illness outbreak (if outbreak it was) was NOT caused by the Abbot plant, yes it STILL remained shuttered until the lack of formula caused a political problem for the Biden administration.

We have been conditioned to believe government bureaucracies like the EPA, CDC and FDA are there to keep Americans safe, despite massive evidence to the contrary.

THIS particular shortage can be laid 100% at the feet of FDA bureaucrats and their immense and feckless regulatory power.

Exactly. Thread winner along with Martin, below..

In an open, functional economy with ‘proper’ and appropriate oversight the shortage would not have occurred. Abbott’s shutdown would have been Abbott’s problem to solve and, with the exception of a recall and some scrambling within the supply chain, almost no one would have even noticed.

They FDA kept the plant closed for months because they couldn’t be bothered to show up for inspections. There was no reason to keep it shut down for so long.

When all you care about, baby-wise, is how to abort them, why pay any attention to feeding them?

Unless they’re coming across the border.

The President of the United States should not know anything about a baby formula plant. Did he realize that I forgot to get gas on the way home so I only have a quarter tank left in my car? Did he check to make sure you paid they water bill since you forgot last month and no you have a disconnect notice on you counter?

If we are going to have an FDA it should be competent to get a company to fix a violation of sanitation standards in a few days maybe as long as a week. WTF are these idiots doing?

When his executive branch shuts down that large of the market share, it absolutely falls at his doorstep.

The WH got concerned only when it became a problem for the midterm elections. The other crisis is gas prices for same reason. We say FJB and he says right back at you.

The only thing the retarded pedophile Biden ever knows for certain is when he needs a diaper change.

Sleepy Joe strikes again. Maybe Abbott should have put Hunter on the board.

Seriously, the FDA knew that this plant produced 40% of the formula. They could have opened imports from Europe, stockpiled formula or even promoted the use of unsweetened condensed milk mixture (the norm before ’67 in the US), contact pediatricians to get the word out, etc. They did nothing. The Biden Administration was once again taken “by surprise.” Simple competency is lacking.

Politicians all act like there is nothing to see here when it benefits them.

“Nobody anticipated the impact of shutting down the Abbott facility.”

A facility that manufactured 40% of the infant formula that the U.S. Government purchases for the WIC (women, infant, children) welfare program. 40%! And Pres. Dimwit and his team of advisors didn’t see that there would be a problem with that? Amazing.