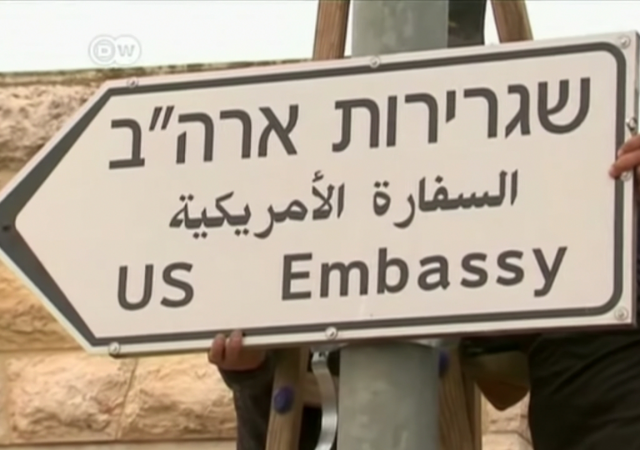 The Biden State Department has set up a separate diplomatic office for the Palestinians in Jerusalem. With this move, “Washington is reversing a Trump administration policy on U.S.-Palestinian relations ahead of President Joe Biden’s possible visit to Israel” set to take place in July, The Associated Press reported Thursday.

The Biden administration’s decision seeks to rollback President Trump’s recognition of Jerusalem as the undivided capital of the State of Israel. The Washington Free Beacon, citing former U.S. diplomats, described the Biden administration’s move as “the first step to walking back the United States’ historic recognition of Jerusalem as Israel’s capital.”

The [U.S. State D]epartment has changed the name of the Palestinian Affairs Unit to the U.S. Office of Palestinian Affairs. In a statement, the newly renamed office said the move was meant to “strengthen our diplomatic reporting and public diplomacy engagement.”

“We felt that it was important to reintroduce separate reporting lines to Washington on Israeli and Palestinian issues, by our respective teams on the ground that focus on these issues,” according to the statement, which also said the U.S. was reinstating a system in place for decades before President Donald Trump’s decision.

The Palestinian Foreign Ministry said it views the reopening of the consulate as part of the international community’s commitments to ending Israel’s decadeslong occupation of territories the Palestinians seek for their future state.

Dan Shapiro, a former [Obama-appointee] U.S. ambassador to Israel who is now a distinguished fellow with the Atlantic Council, called Thursday’s move “an interim step by the Biden administration toward reestablishing a consulate in Jerusalem.”

The Biden administration has already moved to improve ties with the Palestinians, in part by restoring U.S. assistance to the Palestinian Authority and funding to the U.N. agency that deals with Palestinian refugees.

I unequivocally oppose this plan. It's inconsistent with the full & faithful implementation of the Jerusalem Embassy Act of 1995 & suggests the Admin is again trying to undermine America’s recognition of Jerusalem as Israel’s eternal & undivided capital. https://t.co/bo9MTpyc1N

Since President Biden took office in early 2021, he has reversed several important Trump-era policies impacting Israel and the Middle East.

In April 2021, he overturned President Trump’s decision to cut funding for the corruption-ridden UN Palestinian aid agency (UNRWA). The Biden administration pledged $235 million for the UNRWA, an agency repeatedly accused of allowing its facilities and resources to be misused for the indoctrination of Palestinian children in the ideologies of jihad terrorism and Antisemitism.

Abandoning President Trump’s policy of ‘Maximum Pressure’ on Iran, the Biden administration is working to restore the 2015 nuclear deal. Instead of stopping Iran from developing a nuclear weapons, President Biden’s appeasement has brought the regime to the threshold of building an atomic bomb. According to the UN nuclear watchdog IAEA, “Iran’s stockpile of highly enriched uranium has grown to roughly enough material for a nuclear bomb,” The Wall Street Journal reported earlier this week.

How can there be an embassy for a country that doesn’t really exist?

How can atheists get insurance for acts of God?

There is no embassy. Read the article again.

From Obama to Biden, they marched, braying: Jews, second, maybe.

Jews have always been the canary in the coal mine, re a fascist movement.

Democrats and their crap with Palestine has been going on for decades.

ORIGINALLY, if you look at the historical polls, Americans in general supported Palestine through the 80’s.

Right up until Clinton’s insanity with Arafat, where after ‘negotiating’, they agreed to give Arafat literally everything he claimed he wanted for ‘peace, and he refused to take it and walked away.

At that point everybody except the left’s opinion turned dramatically in favor of Israel.

It’s the same circle jerk that the left has done multiple times. ‘Negotiate’ with Palestine by demanding Israel give concession after concession, and then when the Palestinians have taken everything they possibly can, they walk away.

What a bunch of vindictive jackasses.

Jackasses, yet: but they’re looking for power, and they’re trying to get it all via Cloward-Piven:

The Cloward-Piven Strategy: Orchestrating A Crisis So Government Can “Solve” It
https://conduitforaction.org/the-cloward-piven-strategy-orchestrating-a-crisis-so-government-can-solve-it/

Vindictive Anti-Semitic Jackasses. Barak Hussein is enjoying his third term sticking it to the Jews.

Such despicable and indefensible dhimmitude from the vile Dhimmi-crats. Perennially rewarding the childish, destructive and self-sabotaging belligerence of the Arab Muslim, so-called “Palestinians,” when it’s obvious that a “stick” approach that doesn’t coddle and enable their pathologies and their contrived “victimhood” mentality is the only thing that will modify their genocidal aspirations against Israeli Jews.

Modify their genocidal aspirations against the Israeli Jews? Optimist!

Biden and his master Puppeteers can do damage but there is still hope in that they will screw up as they always do. But no one can count on that. Everything they touch that is good is damaged.