UN atomic watchdog IAEA: Iran has “not provided explanations that are technically credible in relation to the Agency’s findings at three undeclared locations.” 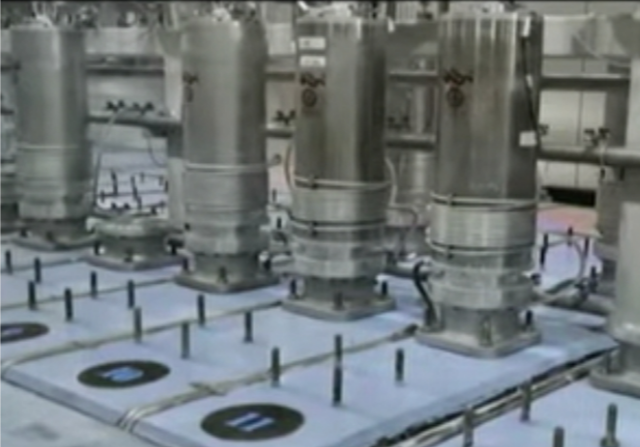 While President Joe Biden continues to make concessions to Iran in a desperate bid to restore the Obama-era nuclear deal, the regime is carrying out illegal nuclear activities linked to its weapons program, the latest finding of the United Nations’ atomic agency suggests.

On Monday, the UN nuclear watchdog IAEA admitted that Iran has failed to provide “credible” answers about the presence of nuclear material found at three undeclared sites. Tehran has “not provided explanations that are technically credible in relation to the Agency’s findings at three undeclared locations in Iran,” International Atomic Energy Agency’s (IAEA) chief Rafael Grossi disclosed at the agency’s quarterly meeting in Vienna, Austria.

The agency “cannot confirm the correctness and completeness of Iran’s declarations under its Comprehensive Safeguards Agreement,” the UN watchdog added on its website.

The remarks come after Reuters and other news outlets reported that the IAEA had found “traces of uranium found at several undeclared sites” in Iran.

The Times of Israel reported the IAEA chief’s admission:

“Iran has not provided explanations that are technically credible in relation to the agency’s findings at three undeclared locations in Iran,” Grossi said Monday, addressing a quarterly meeting of the IAEA Board of Governors in Vienna.

“Nor has Iran informed the agency of the current location, or locations, of the nuclear material and/or of the equipment contaminated with nuclear material, that was moved from Turquzabad in 2018,” he said.

Grossi noted that in order for the IAEA “to be in a position to provide assurance that Iran’s nuclear program is exclusively peaceful, the agency remains ready to re-engage without delay with Iran to resolve these matters.”

Angered by the IAEA’s damning findings, the Iranian regime accused the IAEA of being “a pawn of Zionist Regime.” The Iranian foreign ministry spokesman declared that “the pressure exerted by the Zionist regime [Israel] and some other actors has caused the normal path of agency reports to change from technical to political.”

The Iranian assertions could not be further from the truth. The IAEA has been one of the biggest backers of the 2015 nuclear deal brought about by the efforts of then-President Barack Obama and his Secretary of State John Kerry. The agency has been critical of President Donald Trump’s decision to pull the U.S. out of the flawed deal, which gave an economic boost to the Mullah regime without dismantling its advanced nuclear weapons and delivery program.

When President Biden took office in early 2021, he abandoned the Trump administration’s policy of maximum pressure on Iran, instead choosing to appease the regime by easing sanctions — including those placed on its nuclear program.

I’m totally shocked at this claim.

Nobody in their right mind would believe the Iranians would even consider holding back or even (gasp) lying about something this important to peace in the middle east.

This is more of Trump trying to sow seeds of discontent and take away from all of this administration’s foreign policy successes in an attempt to hide his evil acts of sedition and insurrection about to be revealed on live TV.

VOTE LEFT- VOTE OFTEN. Living or dead, YOUR VOTE COUNTS!!! ( as long as its for us)

Forgot to vote? We got you covered.

Muslims doing what they do best – murdering the non-Muslim and lying.

Is it time for a strongly worded letter?

We may even need a televised Congressional Inquiry to get to the bottom of it.

Or another cargo jet full of Barky-bucks?

Iran has not provided credible answers about anything since since the Shah of Iran kicked the bucket in 1979.

It wont surprise me in the slightest if Israel provides some “credible” answers to this problem.

That WOULD be credible.

Ask Mossad. They’ll tell you where the Iranians got the uranium.

I’m waiting for the Iranians to try to hide too much enriched uranium in one of their secret underground caches. Even 16 Kg of moderately enriched uranium (18.8%) can go critical and start a chain reaction if it’s stored too close together. That reaction would make their uranium supply literally too hot to handle.

The heavy lifting in enrichment is bringing up the percentage from 0.73 to 18.8% or so. This is all a farce waiting for unexplained amounts of Iranian uranium to end up over Tel Aviv.

Developed countries should agree on on a plan to return Iran to Middle age living conditions. No electricity and their leaders settling for 72 virgin sheep or goats..

John Kerry can probably explain it away.

He’ll bring James Taylor in to croon them into compliance.

He inherited 57 explanations from Teresa Heinz.

There is no surprise here. Only a moron would ever trust them, or believe anything they say. But then, we’ve seen the people that did trust them and believe them an I’m proven 100% correct.

FYI – the moment Iran detonates a nuclear device, planes in Pakistan will be loaded with bombs that will be flown to Jeddah where the Saudis will take possession of them.

Can’t wait to engage in diplomacy with bad faith actors. This should work out as worse than Aghanistan.

As Robert Gates said, Brandon always comes down on the wrong side of an issue, and as 0bama has said, you can depend on Brandon to f***k things up.

Let’s just declare the entire middle east to be a nuclear weapons free zone. If that doesn’t work, the US could get rid of its entire nuclear stockpile as a positive example that the rest of the world is sure to follow.