The lawsuit claims that Michael Regan, the agency’s administrator, violated a doctrine in the U.S. Constitution granting states equal sovereignty. 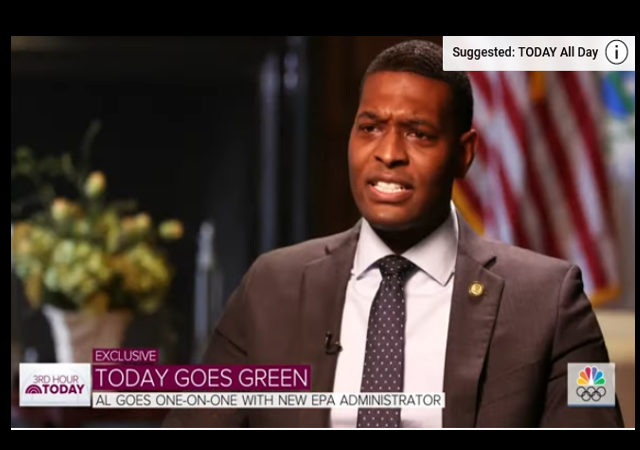 A lawsuit has been filed against the EPA by 17 state attorneys general because the agency has given California a waiver to set its own car emission standards.

The lawsuit claims that Michael Regan, the agency’s administrator, violated a doctrine in the U.S. Constitution granting states equal sovereignty by allowing California to apply for a waiver to set stricter emissions limits for new cars than the limit set federally.

It comes after Regan said in March that the EPA reinstated California’s authority under the Clean Air Act to implement its own emissions standards, first granted in 2013 under the administration of former President Barack Obama but revoked in 2019 under former President Donald Trump.

“The Act simply leaves California with a slice of its sovereign authority that Congress withdraws from every other state,” Patrick Morrisey, the attorney general of West Virginia, said in a statement, according to The Hill.

“The EPA cannot selectively waive the Act’s preemption for California alone because that favoritism violates the states’ equal sovereignty.”

In 2019 the Trump administration revoked a waiver previously granted to California in 2013, which allowed it to set stricter standards for vehicles than the national standard. This March, Regan announced the waiver would be restored.

The EPA, which said as early as 2021 that it would reconsider the revocation, has called the Trump administration’s decision to revoke the waiver “inappropriate.” In its announcement, the agency said its predecessors’ decision was not based on any factual errors in the waiver.

If the Biden administration’s failure were a fuel, we would be energy independent for the next 100 years.

After the waiver was rescinded, California sued the federal government, arguing the tougher standards were necessary to improve air quality in the state.

Three years later, under the Biden administration in 2022, the EPA reversed its hostile stance toward California’s vehicle emission standards and reinstated the waiver under the Clean Air Act. Multiple attorneys general called California’s special treatment unconstitutional, including many of the states that joined the recent petition.

In March, Rep. Cathy McMorris Rodgers of Washington, Republican leader of the House Energy and Commerce Committee, said, “President Biden’s strict auto emissions regulations are yet another example of this administration putting a radical rush-to-green regulatory regime ahead of restoring America’s energy dominance and leadership.”

I’m confused. There have been stronger pollution laws in CA since the ’70s.
I know, because in 1974 I bought a used 1971 Camaro originally from CA and had to remove the factory installed smog pump myself. So these standards were not first put in place in 2013! CA has always been ‘special’.

Clean Air Act originally enacted in 1963 and contained the California waiver. So I’m sure that by the ’70s they had their tougher standards enacted and in place.

I agree with oldvet50. I had a 1975 Mustang II, and it was loaded with California emissions equipment. I was in NY, and after I removed the excess garbage my mileage rose from 17mpg to 28mpg. What changed between then and now?

Many people are reading the Constitution ever more closely, finally realizing that it’s a document limiting fedgov.

That’s what I’m hoping for.

Off topic: why is LI taking advertising from Disney? (that annoying bottom popup is often for HULU).

Perhaps a reminder to people the Hulu is Disney but frankly always take ad money from people you don’t like to present ads to people unlikely to purchase the advertised product.

Just out of curiosity, I wonder how much pollution is caused by manufacturing all those tags found on just about everything stating that the item complies with California standards or contains substances “known to the state of California to cause” all manner of maladies?

How much polution is caused by pro-environment movie stars, celebreties and politicans compared to the avaerage Californian?

That’s contrary to the state constitution, but we are strictly one-party-rule. The Gov, both houses of legislature, and the supreme court are all run by the Dems, so nothing will ever happen.

Which is complete nonsense. The difference between CARB and EPA standards is meaningless, ecologically speaking. Now that most cars are 2000 or later it’s pointless.

One old smoker is thousands of late model cards, pollution-wise. The problem is CA won’t do the right thing, which is to increase registration fees as cars get older, steeply so on 30+ year old cars. Instead older cars get a price break, which encourages keeping old polluters rather than replacing them. Natural replacement of older car models will do far more for California’s environment than anything CARB does.

Artificially high fees for older cars is not a “natural” way to get older cars off the road. It just punishes those tho really are in a tight budget, or who like their old cars and see no need to replace them.

They’re just aren’t that many aging Studebaker’s, Pontiacs, De Sotos ( or is that De Soti?) and Nashes on the road.

Do you know why many of us keep our older cars?

For me it’s mostly because I can repair the goddamn thing when it breaks and I don’t need thousand-dollar computerized tools to do so. In fact, I have a few hundred dollars worth of tools and the collection expands slowly. Good luck fixing most of the newest designs where just replacing the part won’t do it because then you need a special scan tool to mate the parts together. Screw that, I like physical connections and adjustment screws. I know what they do and they don’t change for no good reason.

For those of us who own cars without hard drives and GPS input, when the next solar flares or EMF pulse comes along and disables most of the fleet, I’ll be driving along just fine.
When California had its own rules in the ’70’s, you could get a decent car in the other 49 states. Now, in a global market, the strictest, stupidest set of rules impacts the whole country. That’s not fair. I hope this lawsuit is successful.

Your negative comments are totally racist. As you can see the EPA administrator is a person of blackness. You are trying to fuel dangerous racial confrontation and and hasten the end of a planet in a conflagration of racial violence and greenhouse gases. Only by aborting more babies can we solve this. This is not who we are.

And to boot, my lame state, Massachusetts, has adopted CA emission rules, costing us more, lowering mileage, and making it impossible to buy cars from adjacent states. And we don’t have the same emission needs!

They’re still butthurt over all the cheating liberals who cruise over the line to buy their new cars in no-sales-tax NH or ME or whatever the scam was.

Look at the door sticker of virtually any car or light truck. “50-state compliant “. So, no. The old days of the lower mileage and choked performance have been gone for close to a decade. I don’t like this California Mickey Mouse stuff any better than anybody else. But facts are facts.

This is really big. I’ve been waiting for years to see something like this.

Consider this: What CA is being allowed to do is an intrusion into Congress’ exclusive legislative jurisdiction over interstate commerce. In the enactment of their own emission regulations, they have extended the state’s authority into other states, causing manufacturers in other states to change their designs and processes in order to sell in CA articles that are otherwise sold in other states without encumbrance. If every state participated in such nonsense, there’d be mayhem. And this is exactly the reason why the authors of the Constitution put the authority for the regulation (the “making regular”, i.e. promotion and facilitation) of interstate commerce solely with Congress – to prevent the states from making a mess of it.

This has other important applications.

Think about this in regard to firearms laws in several states, preventing the sale of certain weapons in those states, or in which some weapons, in order to be sold in certain states, must comport with state-specific regulations (analogous to the demands made on automakers by CA emission regulations). Consider laws like bans on “high-capacity” magazines, which bar the sale of articles that move in interstate commerce, said movement being prevented by some states. A state can’t make auto emission regulations without having the (unconstitutional) cutout to do so. They certainly can’t make similar laws regarding firearms without such a cutout.

All state firearms laws that ban or otherwise affect the sale of firearms (and their accouterments) violate Congress’ exclusive legislative jurisdiction over interstate commerce. Just like California’s auto emission regulations.