FDA chief Robert Califf admits his agency’s bureaucrats were ‘too slow’ to act. 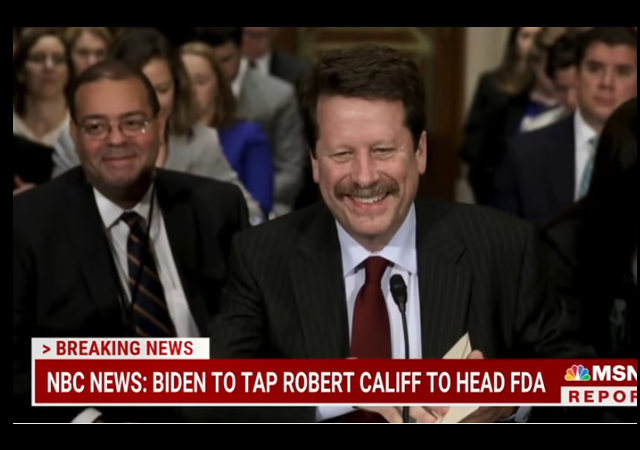 The baby formula shortage has not improved despite the recent reverse Berlin Airlift of supplies from Europe.

In fact, it has gotten worse.

In April, the data showed that the formula shortages hit 30% before jumping to 43% by early May, underscoring how the situation is growing worse before it gets better.

Abbott Nutrition’s Sturgis, Michigan, facility, which exacerbated the industry-wide shortage, is expected to restart production June 4, meaning products from the plant won’t return to store shelves until at least mid-July, according to the company’s production timeline.

In fact, “experts” are calling the recent airlift exactly what it was . . . . political theater.

The symbolic gesture, part of “Operation Fly Formula” — the program President Biden launched last week to expedite shipments of formula to mitigate the national shortage — may be more of a sign than a solution, said Peter Pitts, a former associate commissioner at the Food and Drug Administration.

“On the one hand, it’s political theater because the president wants to be seen to be doing something — and so I appreciate that — [but] its actual impact is limited,” said Pitts.

…Pitts, who is now president of the Center for Medicine in the Public Interest, also said the specific, hypoallergenic type of formula delivered in the first and second shipment – though important – will do little to mitigate the limited supply availability across the board.

“I think if the president had said, you know, this is not the solution to the problem, but it’s something we can do right now for those infants most at risk, I think that would have been [better] than a grand announcement that’s going to have significant but limited impact for the majority of American parents,” he said.

Legal Insurrection may recall my post about FDA Chief Robert Califf, who recently asserted that “misinformation” was a leading cause of death in the U.S. He was grilled in front of a congressional panel to explain all the poor choices made by his agency that led to the crisis.

He was forced to admit the FDA was too slow to respond.

Rep. Morgan Griffith, R-Va., the ranking member on the committee, questioned why it took the FDA more than three months to address this shortage. Why didn’t the FDA “move heaven and earth” to address this, he asked.

FDA’s timeliness in interviewing a whistleblower and getting into the Abbott facility for inspections were “too slow,” Califf said. “Some decisions in retrospect could have been more optimal.”

To many questions from lawmakers on the agency’s work flow and timeliness, Califf simply said, “We don’t have a great answer.”

Perhaps if the agency weren’t so busy trying to control American thought, rather than supporting the production of healthy and safe food and drugs, then this crisis would not have occurred.

Every single suburban woman who voted for Biden brought this calamity on this nation and on themselves. No baby should be at risk because of stupid voters but here we are.

To reiterate; the Abbot plant was NOT the source of the contamination outbreak that killed 2 babies months ago, but it still remained shuttered until the FDA was embarrassed into allowing it to reopen.

This is wholly on the bureaucrats. Their regulatory power is immense, with no recourse for those businesses caught in their tentacles.

Don’t let Abbott totally off the hook, that plant had issues at the time of inspection and times of previous inspections. The repairs and work orders completed did not fix many of the issues within in the plant. There was poor coordination between Abbott and the government in figuring out the short and long term issues caused by an extended shutdown.

I have first hand knowledge, having worked for Abbott for >7 years and ran projects at their Sturgis plant. While no manufacturing plant is perfect, Abbott has very high standards for quality. The fact is that the source of contamination did not come from the Abbott plant, and the government has had the plant shut down since February, creating the current crises.

Classic bureaucracy; ‘mistakes were made’, ‘with the benefit of hindsight’ will translate into ‘give us more power and more money and we promise to do better next time’. No organization other than Federal Govt is this BS so rampant. Sure private sector makes mistakes but they pay in lost sales and lawsuits. They might hire the boss’ dumbass nephew but they don’t give him anything import to oversee. Federal govt on the other hand is an incestuous pool of hacks swimming back and forth from SR govt positions to industry/private sector and back with zero true accountability. We are not getting value for tax dollars.

Biden’s game plan when facing a crisis is to find someone to blame it on and do nothing. But the White House was shocked when their Media allies kept bringing the formula shortage up!

I am convinced they had a huge meeting in the West Wing, sat around the big table and asked, “What do we do now?”

After minutes of awkward silence a unknown voice from the back spoke up, “What would Donald Trump do?”

But hey at least the drooling jackass got his photo op of a pointlessly small amount of formula arriving on a plane!

This situation reminded me of an old cold war era joke. How did the communists light their homes before they had candles? With electricity.

It’s not just infants affected. Medical formulas for specific conditions are unavailable right now too. My grandson has PKU, a genetic disease that affects the body’s ability to metabolize a specific amino acid. Abbott Industries makes the formula for PKU which takes out that amino acid (phenylalanine) so children can grow up to be normal adults. They drink it their entire lives. Without it they become profoundly mentally retarded and once damaged, PLU brains can’t be fixed. There isn’t a “homemade” substitute. Fortunately my wise daughter-in-law banked some additional formula or my grandson would be in a world of hurt right now.

How many other families with specific formula needs are silently suffering? What a horrendous tragedy!

Your grandson’s life, your life, my life, school shooting victims’ lives: all are disposable in the name of leftist fascism.

Wait till next year when there are FOOD shortages. You haven’t seen horrendous tragedy until the portion of our nation that is corrupt and/or mentally ill becomes hungry.

But then, martial law was always the goal.

You have to watch out for anything containing aspartame as well.