Late-term abortion: “Look, you got to leave it up to the woman.” 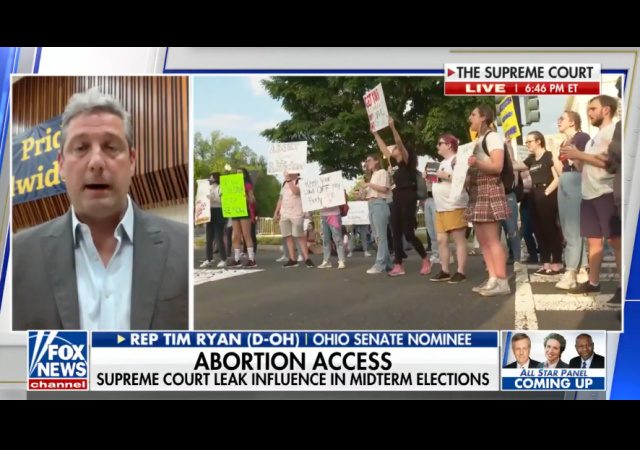 Ohio Democratic Senate candidate Tim Ryan is totally okay with a woman murdering her unborn child at any point in her pregnancy.

These people are sick:

TIM RYAN: Look, I think what we had established in Roe is something that we can continue to work with, and I think those can be the parameters. But then again, if you get rid of what was established law which in many ways was conservative to keep that to appreciate stare decisis and make sure we appreciate the law. If we move away from that you will get states like Ohio that have some of the most extreme laws in the whole country. Where if you are a young girl, and you have been raped or there has been incest that you can’t — you have to — the state, the government is going to force you to bring that baby to term and I don’t think that’s a fundamental value.

BRET BAIER: My question was about any limits to abortion at any point. Late-term, anything?

TIM RYAN: Look, you got to leave it up to the woman. You and I sitting here can’t account for all of the different scenarios that a woman, dealing with the complexities of a pregnancy, are going through. How can you and I figure that out?

No confusion. They are cowards that like to be able to control and even kill defenseless people. That is why they want gun control. More defenseless people.
They look at China locking down a section of their country over a version of COVID not much worse than a bad cold and say to themselves if they didn’t have guns look what we could do to them. That is the values of the Democrat party leadership.

They always throw out the rape scenario to justify abortion, but with the “treatments” now available (e.g. morning after pill), it would seem there is already a remedy (I know some still consider morning after pill an abortion….).

Who is this trans phobic person? We are informed that there are no more hard and fast biological definitions anymore and that terms such as man or woman are hateful, artificial constructs designed and imposed by our oppressors. That being the case who are these ‘women’ this person refers to?

Sorry, pal that’s the price you pay for choosing to be a d/prog. Every bizarre argument pushed by the d/prog became an albatross the moment you filed to run as a d/prog. It’s only fair as r have had the same treatment for decades, the difference is that we had to deal with fringe issues while your party has mainstreamed it’s wierdos.

Good. Let’s put this on the table. Democrats are willing to let you kill any child for any reason as long as they can’t see the child directly. Let’s actually talk about what is happening and why and what restrictions should be place on it.

Also the whole this is between a woman and her doctor is a bunch of crap.
The woman obviously feels distressed and the doctor is profiting.
There are a couple of humans that are thinking things through with only the best of intentions. It is just the equivalent of saying that a contract killing is a private matter between a person and their hitman. Just think how much Michelle Williams career could have been enhance by having someone kill some of her rival actresses. She could have had better roles sooner and made more money. Maybe I would even have remembered her name and not had to look her up by searching for the stupid speech she gave about her abortion enhancing her career.

What a fine Irish lad.

The Democrat party, during my lifetime, has become completely unhinged. They have no moral compass whatever, and are subject to whatever fever dreams currently pass for good public policy in the minds of the party leaders.
They have become a demonic force within this country.

Look like there is a clear divide in Ohio.

What about post-term? How long after birth does a woman get as a “graceless period”? Five seconds? Five hours? Five months?

They can codify Roe. They do not have the votes and they know it.

Guess who is going to get crushed in November? I hope he spends billions losing this election.

He must have read, “How To be a No Limit Person” by Wayne Dyer.

I don’t have the energy to look it up, but I wonder if Ryan took the same tact (the people know best and shouldn’t be told what to do by the government) about COVID lockdowns, masks, and vaccines)

From the actual audio clip, he’s assuming the circumstances are dire enough to match the gravity of it, so he doesn’t want to preclude it.

It fairly annoying to carry a baby that far so it’s likely to be something extraordinary. Otherwise it would have been aborted long ago.

It’s self-limiting in the right direction.

And this is the duplicitous fuck that claims to be a ‘moderate’ and is ‘running against Nancy Pelosi’.

Good! I hope it comes up in the debates. It should be fun watching the retard trying to defend infanticide.

He may be sick, but at least we should be grateful he’s honest about it.
It’s not like he’s a SCOTUS nominee desperately lying until she gets installed and can do whatever she damn well pleases.

No limits on what a mother can do to her child? Why? Would Ryan accept victims of rape or families of those murdered, get to demand whatever form of justice they like? Somehow I think demands for impalement, drawing and quartering, or other such medieval practices would be rejected as barbaric, cruel and inhumane, and completely unacceptable. Why can these things be done to innocent children but not the guilty?

Democrats hate the innocent, and love the guilty.