NYC Workers Won’t Go Into the Office Due to Crime, Not COVID

NYC Workers Won’t Go Into the Office Due to Crime, Not COVID

“No matter what employers do to encourage [their employees to return to the office], … if we can’t solve the public safety problem.” 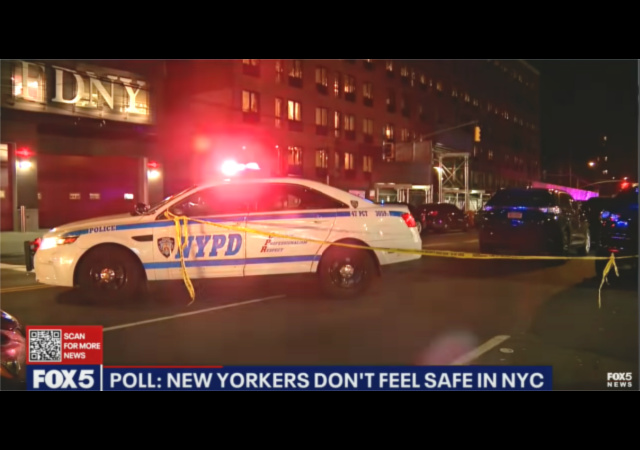 Partnership for New York City, a nonprofit group for local business leaders, discovered that people want to work from home due to the growing crime rate, not COVID. From The New York Post:

Under 40% of Manhattan office workers currently go to their desks on an average week day, according to Partnership for New York City, a nonprofit group representing local business leaders.

The head of the group, Kathryn Wylde, in an appearance on WABC aired Sunday, assigned blame for the low office attendance to “the public safety problem” and concerns surrounding homelessness, rather than the city’s increasing COVID-19 positivity rates.

“When we asked employers what’s the factor that would be most effective in bringing people back to the office, they said, ‘Reduce the presence of the homeless and mentally ill individuals, and expand police presence on the streets and subways,’” Wylde told “The Cats Roundtable” host John Catsimatidis.

“There’s no mystery here. No matter what employers do to encourage [their employees to return to the office], … if we can’t solve the public safety problem,” she explained. “If we can’t do that, we are going to see a long-term decline in the presence of folks who are willing to take the subway and come back to the office.”

About 83% of those in real estate attend work in person. The number has gone up since November when only 28% of those in Manhattan went to the office.

However, City Hall predicts “at least 20 percent of the five boroughs’ office space will remain empty through at least 2026.”

Mayor Eric Adams still emphasizes the pandemic as the reason why people won’t go back to the office in his statement about the budget. He wants people to go back to work so the city can recover:

And Mayor Eric Adams told The Post’s Editorial Board on Wednesday that ongoing resistance from employees to returning to working in Manhattan’s massive office towers will complicate the city’s rebound from the coronavirus pandemic.

“We know post-COVID we’re going to be dealing with a different universe, may go to a four day work week for some,” Adams told the paper.

“It is a real concern,” he added. “We’re going to have to get to the table with all of our business leaders, our economists — and really, we can’t stumble into post-COVID.”

The Democrats cannot blame guns since gun violence has fallen in the city. The crime rate went up 34.2% in April from “felony assaults, robberies, burglaries and theft.”

Crime has spiked 84% in the East and West villages, one of the popular arts and culture hubs in Manhattan:

The Sixth Precinct, which patrols the West Village, saw an 84 percent spike in major crime rates when compared to 2021’s year-to-date numbers — the highest increase among Manhattan’s 22 precincts and nearly two times the citywide jump of 44 percent — NYPD data shows. The Ninth Precinct, which serves the East Village, the Bowery and NoHo, is also seeing an uptick in property thefts and violent attacks with the total major crime rate jumping 54 percent so far this year compared to the same time period in 2021, police data shows.

I guess their new commie mayor didn’t do anything about the crime issues after all, Maybe he should give Rudy a call for some pointers.

It’s also a case of you cannot have your cake and eat it too—–i.e., you cannot kiss the criminals asses and have a crime free city at the same time

Exactly. And that’s why I believe that crime – especially violent crime – needs to at least triple from today and it absolutely needs to include the people who drive the politics – the rich ones.

There’s more money to be made in a home invasion of a $10MM condo than knocking off granny for her social security check. Come on bad guys, get with the program.

Also more risk. Besides, rich people don’t generally leave a lot of loose cash lying around, and fencing stuff is inconvenient. Older and poorer people are less likely to use banks and less likely to have security alarms, cameras, guards, etc., and they’re right there in the neighborhood. No transportation costs.

It drives me crazy that people can’t see this and they still vote for these leftists. Why can’t people see that until they vote for people who will actually do something that nothing will get better?

this is what they voted for.

4. And the time after that

New York City is arguably a hostile foreign country with very little in common with America. There is nothing that we can do to help them, and there is no aid that would really solve their problem that they will accept. The best we can do is isolate them as much as possible and do not fund their activities.

Not hostile, but definitely foreign. I had a teacher in high school who used to say that culturally the Hudson is as wide as the Pacific.

Art teacher? Did he ever do a cover for the New Yorker?

You could say we would be better off building a wall around the city. We just have to make sure the president never flies over the city.

No, it isn’t. People voted for Adams because they thought he was against crime. And he is, at least in the sense that he isn’t positively for crime, as our last mayor was. But his anti-crime warrior persona was mostly invented for the occasion, as anyone who had been following his career for years understood.

Still, there was no viable Republican candidate, so the question was which Democrat to choose, and among about eight serious candidates there were only three who weren’t outright insane, and Adams seemed to many like the most reasonable one.

I put Yang ahead of Adams on my ballot, reasoning that although they were both mostly phonies, Yang was more likely to bear in mind who is doing all the anti-Asian crime, and therefore work harder to combat crime, whereas Adams was “woke” before that was even a thing, he was BLM before BLM, so he would have that perspective working against his anti-crime sentiments.

“…there was no viable Republican candidate.”

In the year 2525, if man is still alive
If woman can survive, they may find
In the year 3535
NYC will get another Republican mayor
To reduce crime by 10 or 5

Been a while since I heard that song.

How far into anarchy do they REALLY want to fall?
The intended result won’t be what the purge-minded left is wishing for.

Those who have been patient, will start to fight back. When they do, it is then that you will see the police spring into action. Not until then.

I’m not holding my breath on that one …

Against the ones fighting back, I assume you mean.

Off-topic. For those following along at home I’m being released from the hospital just as soon as one of my medical supplies is here. My music teacher is driving me home, and I’m going to fall right into bed. They eliminated quite a few things but there’s still some cultures running in the lab. Because my fever has been stabilized down to a reasonable level and sometimes even normal, they figure I’m far better off in my own bed than this cramped piece of junk that I’m in here.

That’s the best news I’ve heard all week. Good luck to you, my friend, and don’t forget you have a lot of friends at Legal Insurrection.

But, I’m sure many don’t want to hear my “organ recitals “.

Piano would be nice.

Set up a Youtube channel, there’s an audience out there for everything.

Sheet Music Boss is an amazing Youtube channel that does all kinds of piano covers of all kinds of songs from popular songs to video game music.

Do you think you can recite what the doctor told you about the condition of your organs without looking at your chart?

So were you too stubborn for the bacteria to kill or did you just confuse them with clever puns?

Chicago has the same problem.

And Baltimore and Detroit and…

“The Democrats cannot blame guns since gun violence has fallen in the city.”
Oh shit, now they’re in trouble. They’re going to have to use their brains to come up with an entirely new excuse, and that never ends well.

A 20% decline in occupancy for office space isn’t confined to real estate. The decrease in workers present translates into less traffic at eateries and bodega. That decline in sales volume impacts whether these remaining small businesses can stay open or they relocate to greener pastures or retire. National chains like Walgreens impacted as well. These patterns can become self reinforcing into a continuous downward spiral.

Most people that are offered telework aren’t going to want to give that up unless forced to do so. It’s very convenient and economical, even if it is less healthy for society.

You can buy a home much cheaper in PA and telework in NYC for an inflated salary without the associated costs. Plus, you don’t have to pay for parking and/or transportation to/from work (which is a considerable cost in NYC and even dangerous if you use the subway). Who wouldn’t take that deal?