Draft map proposed by court-appointed Special Master is a disaster for Democrats, including pitting two big Dems — Nadler and Maloney — against each other. 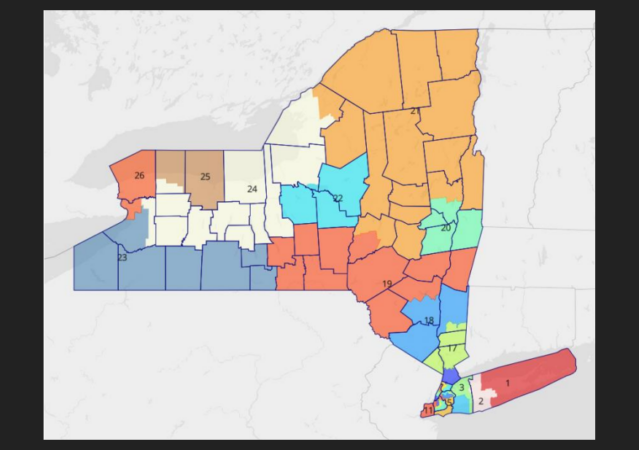 A funny thing happened on the way to Democrats gerrymandering victory in New York State, a feat so bold and audacious Democrats bragged it was a “Master Class” on gerrymandering. Democrats, based solely on redrawing lines, were to pick up 3-4 additional congressional seats.

But all the braggadocio was for naught when a New York State trial judge, then Appellate Division panel, then the Court of Appeals (the highest court in the state) threw out the Democrat maps as an unconstitutional political gerrymander. The Court of Appeals confirmed the trial judge’s decision to appoint a Special Master to propose a map. The Special Master has circulated his preliminary map, and like a tiger caught by the toe, Democrats are hollering.

On Monday, three weeks after the state’s highest court declared the Democrats’ map unconstitutional, it became clear just how spectacularly the party’s gambit had backfired.

A new slate of new congressional districts unveiled by the courts on Monday could pave the way for Republicans to make gains in this year’s critical midterm elections, a disastrous reversal for Democrats in a state where they control every lever of power.

The proposed maps, drawn by Jonathan R. Cervas, the court-appointed special master, would unwind changes that Democrats had hoped to use to unseat Representative Nicole Malliotakis, a Staten Island Republican; flip other Republican-held swing districts; and secure their own tenuous seats in the Hudson Valley region.

The new lines even cast the future of several long-tenured, powerful Democratic incumbents in doubt, forcing several to potentially run against one another.

The most striking example came from New York City, where Mr. Cervas’s proposal pushed Representatives Jerrold Nadler, a stalwart Upper West Side liberal, and Carolyn Maloney of the Upper East Side into the same district, setting up a potentially explosive primary fight in the heart of Manhattan. Both lawmakers are in their 70s, have been in Congress for close to 30 years and lead powerful House committees.

Representative Hakeem Jeffries, the chairman of the House Democratic Caucus and a favorite to become the party’s next leader, was one of a handful of incumbent lawmakers who, under the new map, would no longer reside in the districts they represent. In one case, the new lines put Representative Brian Higgins mere steps outside his greater Buffalo district.

Taken together, the proposed changes have broad national implications, effectively handing Republicans the upper hand in a national fight for control of the House, and rattling the top echelons of House Democratic leadership.

Nadler and Maloney facing off. One will be gone by 2023. Sorry, not sorry.

You can view an interactive version of the map.

The map is just a draft for now:

The map is just a draft, with the final Congressional and state Senate maps due Friday, May 20. The public has through Wednesday to submit testimony regarding the maps to Steuben County Acting Supreme Court Judge Patrick McAllister, who has been overseeing the redistricting process following a successful, Republican-backed legal challenge to the maps passed into law by the state’s Democratic controlled legislature and signed by gov. Kathy Hochul. With that short timeline, observers do not expect major changes to be made to the maps.

The happiest part for me is that Taxin Tonko is no longer in my district and now either has to move, retire, or try to unseat Stefanik in a red district that’s mostly northern NY.

I tried to vote him out for years.

Why does he have to do any of those things? Why can’t he just continue to run for your district without moving?

I think the words “is no longer in my district” are fairly clear.

Yes, it means he no longer lives in UnCivilServant’s district. But so what? He still lives nearby, so what’s to stop him from continuing to run for it? Would anyone who would otherwise have voted for him seriously not vote for him any more just because he lives outside the new borders?!

Not for Congress, you don’t. No state can have such a rule for Congress; it would be unconstitutional.

A quick search shows that NY State requires STATE Assemblymen and Senators to live in their state districts.

RITaxpayer is apparently thinking of state districts and not the two US House Districts.

I wasted my time in doing the searches, there have been several SCOTUS cases involving state or Congressional alteration of the Constitution’s requirements. In each case the SCOTUS decision was neither states, nor Congress, can alter the Article One Section Two requirements, though both could do so through the Amendment process.

Example… CA Rep(r)Tom McClintock years ago was a state senator living in the southern CA district he represented in the legislature, as required by state law. A northern Congressional district opened up and McClintock ran for the seat. He won. He was challenged, as he did not live in that district. The US Constitution’s enumerated requirement for HoR eligibility prevailed.

I wonder if we’ll see mostly peaceful protests at the home of Jonathan R. Cervas now?

This is so much fun. Man oh man, this is what happens when you whine about partisan gerrymandering for years and never bother to reflect inwardly on your own sins.

My tinfoil hat tells me this may haver have happened if the donks hadn’t arrogantly chanted “nanny nanny boo boo” at the world after their brazen theft. FA, FO.

“like a tiger caught by the toe, Democrats are hollering.”

I was honestly surprised to see this happen in New York of all places.

Why? Once they amended the constitution, what other outcome was possible?

Ignoring the Constitution altogether…it’s not like that never happens.

That shouldn’t have been capitalized.

For those of us not in NY and unfamiliar, IIRC the Donks amended the NY State constitution to essentially prohibit gerrymandered districts, and then turned around and did that which they prohibited. Karma can be a beautiful thing,

“Both lawmakers are in their 70s, have been in Congress for close to 30 years and lead powerful House committees.”

So, time to get them both out of there!

Before anyone overly rejoices about this, remember that the Court of Appeals decision was a narrow 4-3. Only one judge, all of whom were appointed by D governors, has to be peeled off by Nadler and Maloney on the basis of an argument that a paramount consideration in redistricting should be — yes, Nadler has already been bleating about this — to keep incumbents in safe seats. And Hakeem Jeffries has been yelling about preserving the number of safe seats for African Americans.

Jeffries is just saying none of his people are good enough to stand on their merits.

Only one judge, all of whom were appointed by D governors, has to be peeled off by Nadler and Maloney on the basis of an argument that a paramount consideration in redistricting should be — yes, Nadler has already been bleating about this — to keep incumbents in safe seats.

What?! If he makes that argument in court it will be dismissed 7-0, with sanctions. The constitution specifically forbids that. “Districts shall not be drawn to discourage competition or for the purpose of favoring or disfavoring incumbents or other particular candidates or political parties.” There’s no way for even the most committed Democrat judge to find a way around that.

If they wanted to find ways around it, they should have tossed the words “shall not be infringed” in there somewhere.

Maybe one of the two Bigshots should move to Queens or the Bronx or Westchester and run against AOC or Bowman. The mob always devours its own. Why not now?

Couldn’t happen to a nicer group of people…

As to Nadler and Maloney, if one is going to go down…..let it be Nader,
The face of the Congressional hearings for the vindictive impeachment proceedings he chaired. It would be due justice if the outcome reflected “What goes around, Comes around”. A Nasty, Nasty Wimp of a human.

Mr. Cervas’s proposal pushed Representatives Jerrold Nadler, a stalwart Upper West Side liberal, and Carolyn Maloney of the Upper East Side into the same district, setting up a potentially explosive primary fight in the heart of Manhattan. […]

Representative Hakeem Jeffries, […] was one of a handful of incumbent lawmakers who, under the new map, would no longer reside in the districts they represent. In one case, the new lines put Representative Brian Higgins mere steps outside his greater Buffalo district.

I don’t understand. There is no requirement that a representative live in his district. So why would this pose a problem for them? Higgins, living right outside his current district, could surely just continue as before. Nadler and Maloney might argue about which one should run for a different district, but surely they could work it out between them. And if anyone feels it’s embarrassing or awkward not to live in their district they could always move. But why is this a big deal?

I think it’s just bad optics…especially for people with a lot of pride in their geography like New Yorkers.

Yeah, but if he lives right outside the district, “mere steps” as the report puts it, then surely there are no voters who would otherwise have voted for him but won’t now just because someone drew a line down his street.

An absolute like no voters is probably not the best assumption to make since voters are strange and behave in scattered fashion.

You are probably right that a significant number probably wouldn’t be affected, but it could be a potential tactic used by an opponent, successfully or unsuccessfully.

I suppose that Congress could refuse to seat a person living outside the CD they represent but it isn’t likely. There are several long serving members who do so.

No, Congress can’t even do that. Its power not to seat members can be used only if it claims they were not actually elected. The moment it concedes that they won the election, but doesn’t want to seat them for some other reason, it loses.

The House can expel a member for any reason, but that takes a 2/3 vote, and it must be on a motion to do that. A 2/3 vote on a motion not to seat the member doesn’t count, because failure to seat is not expulsion.

When my age was measured in single digits, I always wondered why one for example, a quiz show contestant would say he was from Brooklyn. Not New York, but Brooklyn. My mother, herself a native New Yorker, explained that a lot of people who live in Brooklyn still resented the annexation by New York City. At that point I learned about the geographic pride.

I forgot to mention that when the contested said Brooklyn, the audience would break out in applause.

based on the 2020 census new york state loses one house seat, somebody has to go

Oh just tip Nadler over and roll him out the door.

Yes, but what has that got to do with Nadler and Maloney? They can still run in different districts if they like.

Could this be the purpling of New Dork?

No, unfortunately not. It just means the status quo remains for another ten years.

It would be nice if that map had a key to go with it.

Re Nadler v. Maloney: I fervently pray that BOTH lose.

What did this do to Ocrazio-Kotex’s district?