“The victory, which was largely expected, is seen as a win for the most Trump-aligned faction of the GOP” 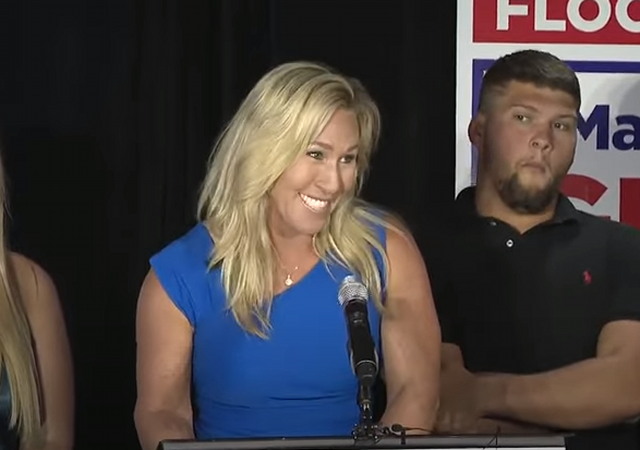 When it comes to triggering liberals, few people can upstage Trump. One such person is Georgia Republican Rep. Marjorie Taylor Greene.

It’s pretty impressive, considering what Greene has been through.

Democrats tried to remove Greene from the ballot, using January 6th as justification.

A group of Georgia voters can proceed with their case against Rep. Marjorie Taylor Greene (R-Ga.) that seeks to disqualify her from congressional office over her alleged involvement in the U.S. Capitol riot, a judge ruled Monday.

Why it matters: Trump loyalist Greene, who denies any wrongdoing, was seeking a temporary injunction against the lawsuit, arguing that the case was not likely to be resolved before Georgia’s primary elections in May, per Reuters.

– The ruling means a hearing in the case, brought by liberal groups represented by Free Speech for People, will go ahead as scheduled on Friday morning before a Georgia state judge.

– Similar constitutional challenges pending against other Republican officials rely on a 14th Amendment provision, known as the “Insurrectionist Disqualification Clause,” that was adopted after the Civil War to prevent members of the Confederacy from holding office.

This was a blatant attempt by Democrats, with the full support of the media, to take Greene out of the race.

And now we know why the Democrats did it. They knew she would win the primary, which she just did.

ABC News, CNN and NBC News both called the race before 9 p.m. ET.

The victory, which was largely expected, is seen as a win for the most Trump-aligned faction of the GOP. Former President Trump endorsed Greene last month.

Here’s a video of Greene commenting on her primary win:

She is probably going to be reelected in November.

The Democrats and their allies are coming at us on all fronts and by all means necessary. As usual we on the right are under attack. With Trump there came the will to counter attack effectively and repeatedly. Things will only get louder from here on as the Democrat is not used to being repeatedly braced and beaten by us. They have a collective glass jaw.

Just wait till Republicans take over the House and Senate, so they can fold.

I’m noticing that it is the women in the GOP that have the (testicular fortitude) many of the (alleged) men lack.

Yeah, if they were Democrat women (with testicular fortitude) they would be champion swimmers.

Speaker-to-be McCarthy will attempt to cool her heels, and he’ll have a lot of RINO support.

And, I think McCarthy will have a tiger by the tail if he tries.

It’s clear that good candidates can win. We need to find good candidates, for everything from the PTA, through the school boards, precinct captains, state legislators and Congresscritters.

Grizz and Valerie…right on both accounts. The moral anger of women, especially those with school age children, is the most powerful weapon normal people have in this war.

It’s all about the mules

MTG also had to overcome the McConnell-led GOP wing of the Uniparty.

Who will the GOP pick to replace McConnell if indeed he’s replaced? Who is any good?

McConnell has been grooming John Thune who is facing a serious primary challenge and may very well lose. Thune is one of Trump’s top targets. This would put McConnell in a pickle. He wants to be majority leader so he can pick his successor. I don’t know who his second pick would be but the senate is full of his loyalists. It all depends on November delivering a major scare to the entire Uniparty by voting out enough squishes to signal the Uniparty is getting eliminated. At that point, most of these polymorphs will detect a change in the political winds and morph to exploit it. We are seeing that already. Everyone in the PA GOP primary claimed to be the REAL MAGA candidate. None of them were.

So my answer is… who knows?

While that would certainly be amusing to watch, I don’t ever see it happening.

Good choice, which is why it will never happen.
I hope I have to eat those words…

He is great on some issues but I bet you wouldn’t want to put your trust in libertarianism when it comes to say anti-CRT or anti-radical gender theory?

None of the bills by Ron DeSantis are libertarian and a principled libertarian would reject all of them.

I like Rand Paul but there are issues he is wrong about and those are important issues.

Big, big problem. Who died and appointed him God? Paul Ryan I guess.

I’m somewhat surprised to hear what an easy time MTG had of it. From her fundraising emails (sometimes two per day), you would have thought she was literally drowning.

She worked her tail off. None of the media would cover her. The only interview I saw of her was TimCast and it was fantastic. She doesn’t just posture like so many “conservatives”, she actually goes out there and gets into the face of the enemy and gums up their plans. That’s why McCarthy did nothing when she and Paul Gozar were stripped of their committee assignments by Pelosi. No one stepped up to defend them. There are far fewer “conservatives” in the House than we like to believe and none that I can see in the Senate.

McCarthy defended her with all the power the HOUSE MINORITY LEADER has.

Paul Gosar shouldn’t have been defended, defending him would have meant defending his indefensible actions and no we are not an anything goes party and yes like Tucker Carlson I agree no white supremacy allowed.

Paul Gosar hurt every Republican candidate in this country, and helped the Democrats claims of racism everywhere.

McCarthy did NOTHING! Being minority leader does have the power to respond force fully to the majority. But when he is just the leader of the other half of the uniparty, posturing and empty words and gestures is all we get. Where there’s a will, there’s a way. That’s how we know there is only one party. That’s we call Stupid Party members “squishes”. Spineless phonies.

Emails are cheap. I get about 25 per day from Trump and company. I sometimes think about unsubscribing, but I let it go and just delete them as they pop in.

It’s to be expected, folks. He’s auditioning for the team on Ted Lasso.

Some of you pussies don’t want to understand we are in a war against the disease of liberalism.

Playing nice is no longer doable because the left has demonstrated time and time again they have the balls to fuck you about and aren’t afraid to do exactly that.

We can fight this war without degrading the women on this forum and elsewhere who are on the front lines. Your comments are unmanly and low class.

When are you gonna go after Milhouse for his comments? I like your style and your comments.

But you know better.

Or is Milhouse comments on this very thread OK with you?

Good to see, wish she was my congress representative

And now we see why the communists tried to sabotage her.

She’s still a ****ing nut. Our nut for sure, and so long as she’s on our team we should stand up for her and not let the Dems bully her, but it’s a bad thing that she won the primary. (Of course I don’t know anything about any of her opponents, so it could be that they were all worse than her. But with that many of them I doubt it.)

Your nuts. 100%
You claim she is “still a ****ing nut” because you are not and never have been for freedom and liberty.

She represents freedom, so you have to try to destroy her along with your marxist buddies.

You fucking liar. You have always been a liar and you are now. How dare you accuse me of not being for freedom and liberty?! Everything I have ever written here has been consistently for those things, and for truth above all. And the truth is that Greene is a 100% nutcase.

I defended her on the “Jewish space lasers” thing, but the only defense available was that she is such a nut that she meant what she wrote literally, and didn’t understand that it was code for Jooos. Her attackers assumed that nobody is that crazy, and therefore she must have meant Jooos, and her defense was that she really is that crazy. That makes her not evil, and not deserving the way the Dems treated her, but it also makes her not fit to serve in Congress.

If you think she’s not a nut, then she’s a fucking antisemite. There aren’t any other options.

Now let’s see how you comment on Milhouse in this thread.

Or is that OK with you?