Jeff Bezos, White House Get Into a Spat Over Inflation

Jeff Bezos, White House Get Into a Spat Over Inflation 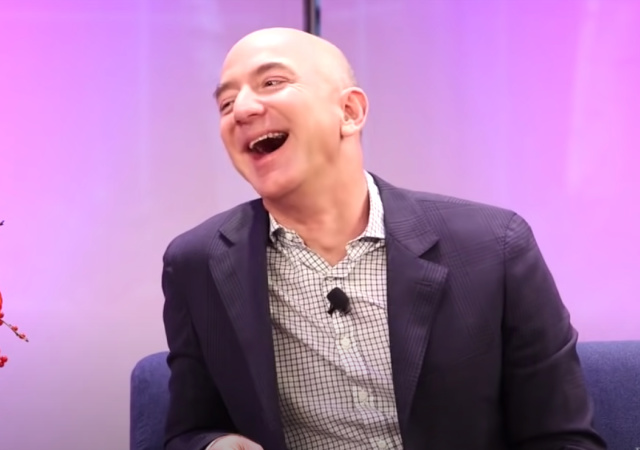 Oh, this is good. Amazon founder Jeff Bezos and the White House have been fighting over inflation these past few days.

You want to bring down inflation?

Let’s make sure the wealthiest corporations pay their fair share.

The newly created Disinformation Board should review this tweet, or maybe they need to form a new Non Sequitur Board instead. Raising corp taxes is fine to discuss. Taming inflation is critical to discuss. Mushing them together is just misdirection. https://t.co/ye4XiNNc2v

In fact, the administration tried hard to inject even more stimulus into an already over-heated, inflationary economy and only Manchin saved them from themselves. Inflation is a regressive tax that most hurts the least affluent. Misdirection doesn’t help the country. https://t.co/a8cygcunEG

The White House said this morning:

“It doesn’t require a huge leap to figure out why one of the wealthiest individuals on Earth opposes an economic agenda for the middle class that cuts some of the biggest costs families face, fights inflation for the long haul, and adds to the historic deficit reduction the President is achieving by asking the richest taxpayers and corporations to pay their fair share,” deputy White House press secretary Andrew Bates said in a statement.

“It’s also unsurprising that this tweet comes after the President met with labor organizers, including Amazon employees,” Bates added.

their best to add another $3.5 TRILLION to federal spending. They failed, but if they had succeeded, inflation would be even higher than it is today, and inflation today is at a 40 year high.

Words of wisdom from a milliardaire.

Yeah, the same schumck who gave BILLIONS to BLM and Antifa is complaining.
What a putz.

“Pay your fair share” makes it sound like the amount of tax paid is a choice, and not compulsory, as determined by the tax code.

If what they’re paying isn’t fair, then the tax code is the problem.

Taking people’s money via taxation under threat of force or imprisonment is not “asking” anyone for anything. “Asking” people for something implies the ability to say no, doesn’t it? Try that with the IRS.

Biden is claiming there is no inflation. It’s all price gouging…not the Democrats wild spending.

It’s also a completely disingenuous argument because the stupid communists don’t seem to understand the difference between personal taxes and corporate taxes. As for the man’s personal taxes, they may be quite low depending on what his company gives him as a salary or whether they are for wages or capital gains. That’s just how the laws work and I don’t blame anybody for paying as little as they can.

What if Jeff had control of a major newspaper and it decided not to just print anti-Republican talking points all the time? Hmmmm. Nah. LOL. That will never happen.

I see you know how to use poetic licence.

It looks to me like he’s heavily into truth.

Yeah. But he softened it. Should be flaming pile of shit.

The tax on the wealthy ought to be less. It’s extra money to the rich, which they don’t need, so whether you take it or not doesn’t affect their standard of living at all. What it affects is how much investment there is, and investment is what buys heavy equipment for ditch diggers and raises their productivity and hence their pay.

As taxes it’s skimmed and paid to politicians and hangers-on.

You want to do something to reduce influence peddling and crony capitalism in DC as well as lower the temp of national politics while increasing accountability?

1. Eliminate federal corporate taxes. No tax means no carve outs, no special deals for favored Corp or industries.
Any economist will explain that corporations may write the check for the tax but the funds come from: shareholders, employees, suppliers and customers. Corporations don’t ‘pay’ taxes.

2. Repeal the 17th amendment. Put the selection of US Senators back in the hands of the State legislature. No Senate campaigns means no campaign funds. People can hold their local State Rep accountable far more easily than a State wide office holder.

Two straight forward things that would perform because they are simple, which means they won’t be adopted anytime soon. They gore too many oxen of too many owned by the rich, powerful and connected.

Even better. Eliminate payroll tax withholding. Let everyone write a check to the treasury for their entire tax bill every year.

Quarterly would be better for several reasons. Among them it evens out revenue flows to Treasury while causing tax filing related citizen anger four time per year. It would also create a tax filing and payment due on Sept 30, just before general elections, which might make some pause before voting for ‘tax and spend’ candidates.

As the great Milton Friedman once explained, only the government can create inflation.

Biden is acting as if inflation is a demand problem, not a monetary problem.

It’s a general excess of demand (in the form of ability to pay) over supply. The price increase normally would stop so long as the fed doesn’t accommodate it, whether it’s from a supply shortage or a printing excess. The existing increase is serving to match what the economy is capable of doing at once to the number of tickets to tell it what to do that are out there.

“Acting” is being generous. Even without dementia, he has no idea what he’s talking about.

In fairness, much of the current inflationary pressure are a supply problem. All are artificial scarcity of product whether it be:
1. Covid response policies that have upended supply chains and continue to plague us
2. Creating regulatory barriers for some industries; domestic oil and gas, pipelines, refinery, summer fuel blends,
3. Shipping distillate diesel to Europe, sending oil to Europe, sending LNG to Europe all to replace sanctioned deliveries
4. Infant formula

Of course that doesn’t include the disastrous Monetary policy of the Fed in continuing massive QE and rates far below the Taylor rule nor the foolish Fiscal policies of creating $6 trillion in new spending for foolish Covid response.

The Federal Reserve is fighting a decades long excess liquidity problem that has created an everything bubble across asset classes and an artificial scarcity/supply constraint price rise at the same time. The only way out is the creative destruction of a recession. Don’t expect a ‘soft’ landing, that’s hard enough in normal times but in this environment it is, IMO, impossible.

Is it churlish to point out that this “rebuttal” is 100% ad-hominem as it provides neither evidence nor logic to support the assertion that raising taxes would somehow lower inflation?

It’s because there is no logic at all. It’s word games that this admin has been playing since day one.

The lame illogic applied is that raised taxes will only increase cost of living because “those greedy corporations” will raise their prices to compensate for the increased taxes. In the strictest sense of the word, that actually is not inflation (just pig shit by another name).

At the same time, Dems are convinced they can tax their way to paying off all of their spending promises (which requires ludicrous CRT math to even fathom) without having to print as much money. This won’t stop inflation but it can reduce the rate of inflation. We all know that this will be declared a great victory just like the good news about chocolate rations in 1984.

You act as if the pedophile’s argument he’s responding to had any logic to it.

“Maybe if the White House keeps firing at Bezos then Bezos will become a libertarian?”

Bezos will become a libertarian the week after Kamala becomes a nun.

Be careful—you will hurt his feelings.

Some belated common sense from Bezos, issued with the most delicate admonishing tone — far too delicate. And, yet, Bezos, through his ownership of Pravda WaPo and his refusal to rein in the obnoxious, slavish Democrat zealotry of that utterly worthless and dishonest propaganda rag that has dutifully carried water for Dumb-o-crats, while vilifying President Trump and conservatives, has long supported the fiscally illiterate, totalitarian apparatchiks whom he now — all too mildly — criticizes for their ill-conceived and destructive policies. Yeah, Bezos’s support for Dumb-o-crats and Amazon’s refusal to sell books by certain conservative authors is why I don’t patronize Amazon.

I had said the same thing about Warren Buffett, way back when he was indefensibly shilling for narcissist-incompetent, Obama’s, idiotic and destructive “Buffett Rule” scheme to raise capital gains rates, with Buffett contending that he should pay more taxes and that no CEO should pay a lower tax rate than his secretary (and, Buffett’s secretary was no charity case, earning six figures and owning three homes). Which conceit was just a manifestly stupid Dumb-o-crat talking point and demagoguery line, because it failed to account for the fact that Buffett’s wealth is derived from capital gains, which are fairly and rationally taxed at a preferential rate (to encourage investment and entrepreneurial risk-taking), as compared to salary income. What Buffett should have been agitating for was to lower individual income tax rates down to the level of capital gains rates.

Buffett and Bezos should be engaged in an unabashed, unapologetic, full-throated defense of free market enterprise and capitalism, pushing back against the Dumb-o-crats’ profligate spending schemes and their idiotic and greedy taxation schemes for both corporations and individual taxpayers, which stifle and hinder business expansion, risk-taking, job creation and economic prosperity.

The neo-communist Dumb-o-crats are so infantile and predictable. All they can do is attack and vilify. Bezos isn’t allowed to have an opinion on fiscal matters, because he’s super-wealthy! That’s how stupid these people are.

If the Dumb-o-crats keep it up, maybe they’ll turn Bezos into a Republican. Wouldn’t that be fun? Libertarian Musk and Republican Bezos. That would be refreshing.

The IRS has a chart of who pays what in taxes Dementia Joe’s handlers need to take a look. Rhetoric doesn’t pay the bills. Corporations pass that tax bill on to the consumers so it would again be DNC policies coming after you.