The deadly stabbing-spree follows Hamas’s threat to step up terror attacks against Israel. 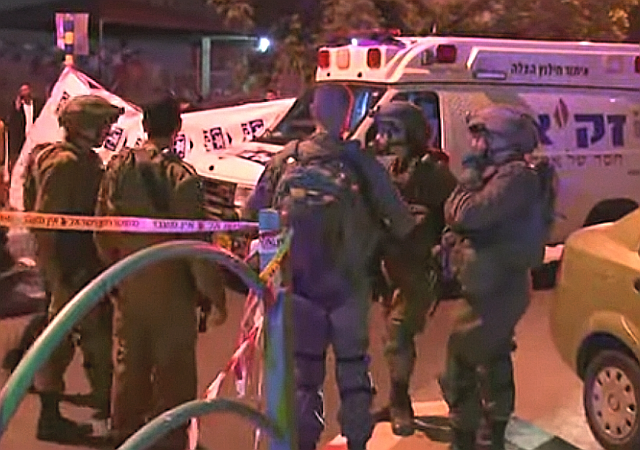 Palestinian terrorists murdered three Israelis and injured several others as the Jewish State marks its 74th Independence Day. On Thursday night, two Palestinians armed with an ax and a knife hacked and stabbed unarmed Israelis in the town of Elad.

The murdered victims were identified as 44-year-old Yonatan Havakuk, 49-year Boaz Gol, and 35-year-old Oren Ben Yiftah. “Havavuk and Gol were residents of Elad and each fathers of five. Yiftah was a resident of Lod and a father of six,” the Israeli TV channel i24News noted on Friday.

Two people were still in critical condition. “Doctors at Rabin Medical Center in Petah Tikva are still fighting for the lives of two more victims of the attack. The two are a 38-year-old man and another in his 70s who remain in guarded condition after undergoing emergency operations throughout the night,” the Israeli news website Ynet News reported.

At least 19 Israelis have been killed in the deadliest wave of terror in the country since 2016. Terrorists linked to Hamas, the Islamic State, and other terror groups have carried out four deadly attacks aimed at Israeli civilians since mid-March.

The Times of Israel reported the details of the Thursday’s terror attack:

Three people were killed and three others seriously hurt in a terror attack in the central Israeli city of Elad on Thursday night, medics said.

The attack came at the end of Israel’s Independence Day, and followed a wave of terror attacks in Israel and the West Bank in recent weeks, and repeated threats by Palestinian terror groups over the Temple Mount in Jerusalem.

According to eyewitnesses, two terrorists attacked several people with an axe and a knife at a central park and a nearby road in the largely ultra-Orthodox city. At least one of the wounded was in critical condition, and up to seven were hurt in the attack.

“There are two unconscious people here,” a man could be heard screaming in a phone call with the United Hatzalah emergency service. “There is so much blood… these are wounds from an ax,” the man said in the call.

Thursday’s attack comes days after Gaza-based terrorist group Hamas threatened to step up acts of terrorism against Israel. Following the Monday’s terrorist shooting, which killed a 23-year-old Israeli security guard near the city of Ariel, the Hamas-outfit Qassam Brigades dubbed that attack “heroic.” They vowed that it “will not be the last one, with [Allah’s] help.”

The Israeli security forces launched a massive manhunt to capture the two terror suspects of being behind the Thursday night’s attack. The counter-terrorism operations are focused around the Palestinian city of Jenin, which has gained notoriety for being a safe haven for terrorists staging attacks inside Israel.

Israeli security forces are continuing a large manhunt after two Palestinians killed three Israeli civilians in the city of Elad.

Police identified the two suspects 19-year-old Assad al-Rafai and 20-year-old Tzabahi Abu Shakir, both from the Jenin area in the West Bank. Security services released their pictures and have asked for the public’s help in locating them, indicating that the two might still be in Israeli territory.

Meanwhile, the violence in Jerusalem hasn’t subsided despite the Muslim fasting month of Ramadan coming to an end over the weekend.

Palestinian mobs again rioted and clashed with the Israeli police at the Temple Mount. “This morning, during visits to the Temple Mount, dozens of rioters began rioting on the mountain area shouting calls for incitement and violation of public order, throwing rocks and other objects at the police forces who secured the visits and maintained order and security and in the area,” the Israeli police said in a statement obtained by the Legal Insurrection on Friday.

The angry rioters showed no respect for the sacred site — repeatedly referred to by the mainstream media as Islam’s third holiest site — or the Israeli police trying to maintain peace and order in the Holy City. Palestinians “began to riot and throw objects from the Mosque out to the mount plaza, causing damage to the mosque and desecrating it. During the dispersal of the rioters, one police officer suffered minor injuries,” the statement added.

Merrick Garland’s advice to Israel: Why worry about crime? What you need to do is set up a Dept of Environmental Justice.

A warning to Israel: you need a Second Amendment right for EVERY Israeli, or the killing will continue.

Here in America, the threat isn’t Arab terrorists, but Americans in a gangster government.

I wish Israel would deal with this kid of terrorism with fuel-air bombs. The only way to to stop this is by making Palestinian Arab squatters understand terror. Seeing something between 1/2- and one-mile diameter areas incinerated would likely dissuade them, and if it doesn’t, a dramatic population reduction would make them easier to deal with.

I am not advocating total annihilation, just enough force to reign them in, Their terror would end as soon as they stop terrorizing others.

If Jews worldwide started a persistent campaign of flying hijacked airplanes into buildings, taking and beheading hostages, shooting up concert halls, driving trucks into pedestrian crowds and tossing homosexuals off of rooftops, perhaps they’d become as popular among European dhimmi Leftists and American Dhimmi-crats, as Muslims currently are.

And, by the way, where are the condemnations of these genocide-aspiring attacks by Muslim terrorists against Israeli Jews, from Dhimmi-crat leaders, including useless dotard, Biden? Silence. Crickets. Consistent with the vile Dhimmi-crats’ gleeful propagation of and deference towards contrived and fallacious propaganda mythologies of alleged Arab Muslim victimhood, combined with their despicable casting of Israeli Jews as alleged “oppressors” who are reaping what they deserve.

So far, they have not been given what they deserve,

There is a way to mitigate excessive aggression in those people, just start adding hormones to their free water. A few decades of much fewer children would improve their quality quality of life, the men would be less aggressive, and maybe they would all value what children they have and not be willing to turn those children into inhuman bombs.

there is only one certain cure for a rabid animal

I keep firearms for both 2 and 4 legged varmints.

Israel needs to attack Hamas, whether judicially or extra-judicially. Either arrest or execute the leaders who encourage these terrorist attacks. My personal preference would be for executions.

Those terrorists enjoy broad public support. Since such large numbers of their people do support terrorism, i t is reasonable to subject them to terror, only though personal experience, will they understand.

This is coming to America – on a great scale. Tattoo-multilated green-haired single white women with nose rings will be doing the stabbing and burning.

and a helluva lot of the dying, tfr