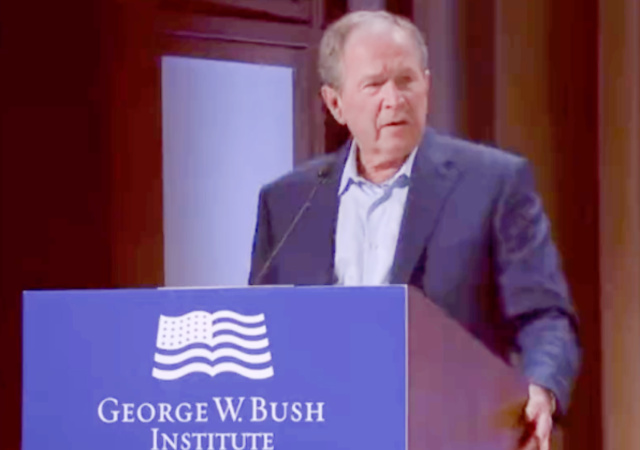 President George W. Bush said exactly what a lot of us have always thought…about HIM:

BUSH: “In contrast, Russian elections are rigged, political opponents are imprisoned or otherwise eliminated from participating in the electoral process. The result is the absence of checks and balances in Russia, and the decision of one man to launch a wholly unjustified and brutal invasion of Iraq — I mean of Ukraine. I wrecked it. Anyway…
(Laughter)
I’m 75.”
(Laughter)

Speaking in Dallas this afternoon, former President George. W Bush made a significant verbal slip-up while discussing the war in Ukraine.

He tried referencing what he described as the “wholly unjustified and brutal invasion” — but said Iraq, instead of Ukraine. pic.twitter.com/tw0VNJzKmE

I regret ever voting for this loser. To quote him regarding how I feel about the GOPe: “Fool me once, shame on – shame on you. Fool me – you can’t get fooled again.”

Well, so do I, but what choice did we have?

Only a Never Trumper can answer that question. I will defer to their wisdom. Momentarily one will come and explain it to you.

We have no choice in most elections, and that’s the way it’s intended by the party leadership establishment and their major donors. They use the party organization and money to push their lackeys on us as candidates, and run government from behind the curtain.

This is also why the party hierarchy fears and despises Trump enough to cede government to Democrats for a cycle help remove him. Trump and his supporters are a threat to their control of the party, money and government — too many non-establishment types in government could push them out of their positions of power and tear down their playhouse.

Freudian Slip there W? Go back to making crap painting, partying with Obama, and doing fund raisers for Lynn Cheney. Just go away.

You summed it up perfectly.

I only voted for him the second time. And ONLY because it was him or John Kerry. Not much of a choice.

I tried to like GWB. But every time he approached if not greatness at least the defensible he’d let you down. I still think the Iraq war was justifiable. But the case should have been made back in 1991 when we should have finished the job we started.

I said at the time no good will come from leaving our troops squatting in the desert. If the job was worth doing then finish it now, all at once, or take Saddam Hussein’s bribe of free oil

So Dubya restarts a war that shouldn’t have remained if his dad wasn’t such a f### up. And he couldn’t make a case for it

George W is trying to clear the field for his little brother to run and fulfill his mother’s dying wish. Inadvertantly, he injected his father into the picture due to mental projection knowing the truth, holding it in and eventually it comes out unexpectedly. If Biden had done it, it would be called a gaffe.

Saddam spent huge PR effort in suggesting he was developing nukes, so deserved the conclusion that he was.

“”The great irony here is that the board was designed to protect against the very thing that the board is accused of engaging in,” a DHS official told reporters during a Wednesday call.

The stupidity that infests the Republican squish voters.

All the Bushes voted for Biden.

Hilarious but the Gulf War was not the decision of one man. The UN and many other nations were involved.

I didn’t have an issue, at the time, with the war in Iraq. And our son was a SpOps Marine, his unit spent lots of time there.

My issue is that Bush didn’t have the spine to actually win the war. He just sent out military out to bleed for no gain. Same in Afghanistan. He – and his whole damn family – can rot in hell for that.

If we are going to war, then we need to go to war and utterly destroy the enemy. Better that every “civilian” in Iraq died than we lose one Marine, Soldier, Sailor, or Airman chasing a stalemate. If we don’t have that level of commitment then we don’t need to deploy.

“bleed for no gain”

Politicians in action since 1945.

Well, the ones who wanted to invade Ukraine are… I suspect most are saying WTF???

Funny Nazi hunting is more sexy than hunting down the assholes in the former soviet union who murdered millions of their own people.

I did. There was no apparent link between Iraq and 9/11 that he could point to. If that were his motivation, he should have been attacking Saudi Arabia or Pakistan. The murmur at the time was that he was just trying to clean up his father’s mess. A lot of GIs ended up dead or maimed for no purpose.

Don’t you see? You’re making my point. There was a case to be made. He didn’t make it. Now you think there was no case. This is how pathetic he was.

I could relitigate it. But I don’t want to.

Well that’s ‘dubya’. Conservatives need a candidate with excellent speaking ability, calm demeaner and eager to throw a punch with an even harder counter punch. One thing Trump demonstrated, the Democrats have a glass jaw when a R fights back. They are not used to that.

We also need to drop the “we need Trumps program but with someone other than Trump”. We’ve had that forever. Trump ran on the traditional Republican platform. The big difference this time is that it WAS Trump and not Bush or McCain or Romney mouthing empty promises.

That is why I am not a Republican. That kind of thinking is exasperating. Republicans didn’t become The Stupid Party overnight. And apparently, there is no cure.

And that’s why you’ve always been irrelevant. The only way to change the party is to be part of it – a very ACTIVE part of it. The ONLY alternative is to elect Democrats, and that hasn’t helped California very much.

No, that is why Trump became POTUS despite the screeching from you LOTE RINOs. And you STILL don’t get it. Forever stuck on stupid.

Trump did not run on the same GOP platform. You are the moron.

This is the part of his quote that could be attributed to America under Joe Biden…..”In contrast, Russian elections are rigged,” he said. “Political opponents are imprisoned or otherwise eliminated from participating in the electoral process. The result is an absence of checks and balances in Russia”

W is one of America’s worst. To show his corruption and disdain for America this is what he said after 911,

“The face of terror is not the true faith of Islam. That’s not what Islam is all about. Islam is peace. These terrorists don’t represent peace. They represent evil and war.”

Islam has waged a continuous 14oo-year war against non-Muslims and this clown says that. And set his policies based on this deceit.

“W is one of America’s worst.”

His father except for his WW2 service was a wimp.

“W” paved the way for Obama. His presidency is mostly noted for having delivered the entitlements Ted Kennedy worked so hard for: “No child left behind” and “Medicare Part D”. He came close to also delivering amnesty for illegals. That’s what LOTE gets you.

Pasadena Phil Rule: “I never ever vote for liberals or Democrats, ESPECIALLY if they run as Republicans.”

The txvet squishes can stuff with their arguments about voting for a Uniparty Republican being better than a Uniparty Democrat. The LOTE. Those idiots will never get it. Trump may very well turn out to having been our last chance to get it right. But they are working to blow that too.

He had me at ending the first Iraq war with a trial of his peers. Then Bush got lost in Obama’s world Spring series, and welcomed the Biden/Maidan/Slavic Spring.

So glad I didn’t vote for him or Gore. Even worked Kerry’s campaign and GOTV efforts to get rid of that clown.

The lives lost, the money spent, the reputations tarnished. All because he has a little dick and wanted a war and wouldn’t take it to his friends in Saudi Arabia who were funding Osama.

Well, at least we agree on something…..

Every day Obama was in office he made the comment, “I inherited this mess from Bush.”

But now that he’s out of office he meets with Bush every night and they laugh about it over a beer. It was an inside joke.

I NEVER voted for W. I am not proud of voting for Gore or Kerry, but at least I didn’t vote for W.

Between Clinton, Bush, Obama and Biden, the lesson is this: never elect a crook, a rino, a traitor or a moron.

Our government is infested by all of these.

1. Mass invasions of nations and bombing countries regardless of their sovereignty (400k killed)

2. Massive deficits in the name of jacking up military spending for his wars

5. Influence in abandoning or de-emphasizing social issues that ironically got to its height after he left with the tea party and influence over the catastrophic Romney candidacy

6. Forgetting over a century of major political lessons the Republican Party learned over the course of its existence in favor of “MUH GOVERNMENT BAAAAD MUH CORPORATE GOOODDD!!!!!” resulting in Democrats effectively taking over the government

7. Republicans kicked out of the public square in the name of “MUH GOVERNMENT BAAAAD MUH CORPORATE GOOOOODDD!!!!” something that couldn’t have happened under the 20th century Republican Party because well it would have legislated against exactly that pre-emptively as it did in 1984 against cable companies being able to do that.

So many of our current problems have Bush as a cause of them that I think he could do worst than go back to shutting up.