The seniors all applied for religious exemptions but their requests were denied. 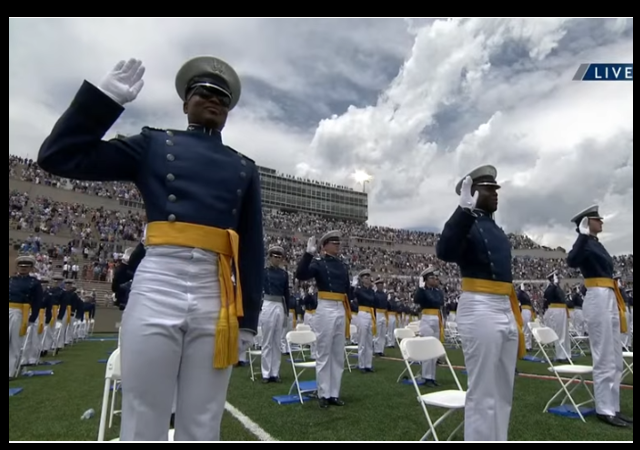 This weekend, the country is facing a surge of covid cases.  Early reports indicate that the increasing number of cases is not leading to a rise in hospitalizations.

Nationwide, cases have climbed by roughly 58 percent over the past two weeks as the omicron coronavirus subvariant BA.2 and an offshoot of that strain, called BA.2.12.1, continue to spread.

The last time confirmed cases exceeded 100,000 was in mid-February, when the winter surge, fueled by the original omicron variant, BA.1, began to subside.

However, in the Northeast, where the vast majority of cases are being reported, the rate of hospitalizations and deaths aren’t as high as expected, a senior administration official told NBC News earlier this week.

This is as I projected based on past histories of coronavirus infections: There will be waves of infections until population immunity builds up and the virus joins the others in the standard cold suite of pathogens.

Furthermore, as I have noted in my coverage of the Gridiron Dinner and White House Correspondents Dinner, leading politicians and celebrities who have been vaccinated and boosted have come down with covid.

Furthermore, earlier this year, Gen. Mark Milley (Chairman of the U.S. Joint Chiefs of Staff) and Secretary of Defense Lloyd Austin both came down with covid . . . despite being vaccinated.

Given that the illness is usually mild in the young and healthy, the failure of the vaccines to protect from infection, and the increase in political tensions across the globe, you might think that destroying the careers of promising young officers before they launched would be….unwise.

However, different choices are made when virtual signaling is more important than strategic military planning.

Four Air Force Academy cadets may not graduate or be commissioned as military officers this month, and could be forced to pay back thousands in tuition, after they refused to get vaccinated against the coronavirus, Air Force officials said.

The Air Force Academy is the only military academy so far to announce penalties for a failure to get vaccinated. The Army and Navy said their seniors are not being barred from this month’s graduation over their vaccination status.

Air Force Academy spokesman Lt. Col. Brian Maguire said the graduation is two weeks away and that the cadets still have time to “weigh their options.” There are also two juniors, one sophomore and six freshmen at the academy to have refused the COVID vaccine.

Last year, the Pentagon announced a vaccine mandate for service members, including for those at military academies. Defense Secretary Lloyd Austin said the vaccine is crucial to the military’s health and readiness.

Former Colorado State Rep. Gordon Klingenschmitt, for example, labeled the unnamed students ‘evangelical Christian cadets, who are pro-life, and they object to the fact that the vaccines were tested on aborted fetal stem cell lines.

‘Because of their objection to abortion, their conscience will not let them … inject this particular drug into their own bodies,’ he told the Gazette.

‘That’s why they won’t take the vaccine,’ he continued. ‘It’s not because they hate all vaccines.’

Klingenschmitt has now planned a rally outside of the Air Force Academy north of Colorado Springs, saying: ‘There’s only one person who can change his mind right now, and that is the superintendent, three-star Gen. Richard Clark.

‘Our protest is to plea with him personally, “Sir, please keep your oath. Please let the cadets graduate. Defend their religious freedom.”

I argue that the vaccines are, at best, useless . . . especially for young, healthy adults and because the variants are no more hazardous than bad flu in the worst-case scenario. Therefore, the decision for this vaccination should be based on the individual’s preference.

Hold the phone what happened to MY BODY MY CHOICE?

I think you missed the part where they were identified as White Christians, they have no rights.

That’s what they should be shouting on a megaphone

This is what China exactly wants, a weakened US military, and the US military is obliging. The USAF is actually calling up reservists to serve as court reporters because there are so many people they are kicking out and have to work through the backlog.

For God’s sake, how long do we have to put up with this insanity?
The shots DO NOT WORK!!!

Worse than that — they are actively debilitating pilots.

Keep their addresses in the Rolodex. Once the vaccinated can’t fly and the cockroaches that presently run the Air Force was dismissed… we will need them back.

“the omicron coronavirus subvariant BA.2 and an offshoot of that strain, called BA.2.12.1”

Throw another baby on the barbie, it’s over? Perhaps not.

On the other hand, …. It sounds like a stretch to base objection to the vaccine on a religious belief against the methods that were used, or may have been used, in its production. Regardless of the effectiveness of the vaccine.

The USAF, as well as flying planes around, also staffs the various land-based missile sites. These guys have the potential of being the guy at the console when the balloon goes up; will they be questioning the launch order on some specious concept?

How does it seem like a stretch. Many religious people object to abortion and using aborted fetal cells would be objectionable to them.

It sounds like a stretch to base objection to my ownership of a TV on a religious belief against the methods I used to loot it.

It sounds like a stretch to base objection to my receipt of large quantities of campaign funds on
the moral objection that they were bundled from neo-Nazi organizations.

As a non vaxed myself don’t blame them for not kneeling down.

At least they’ll still have their health. The same can’t be said for the rest.

In my humble opinion, these four cadets are the smartest in their class.

And that is all I have to say about it.

the unnamed students ‘evangelical Christian cadets, who are pro-life, and they object to the fact that the vaccines were tested on aborted fetal stem cell lines.

Testing with embryonic stem cells is very common in modern pharmacology, and includes such common drugs as Tylenol, Pepto Bismol, Motrin, Tums, Benadryl, and ibuprofen. Stem cells used for testing were derived in the 1970s and 1980s and are thousands of generations removed.

“Furthermore, earlier this year, Gen. Mark Milley (Chairman of the U.S. Joint Chiefs of Staff) and Secretary of Defense Lloyd Austin both came down with covid . . . despite being because they were vaccinated and boosted, weakening their immune syatem..

their careers, their choice—wonder what Nike would have to say about this

It has long been suspected that many of the Cadets no longer adhere to the honor code. Well, now we know that at least four do.

I wonder what amplification level these PCR tests are using. They never disclose it, presumably because it can be easily changed to manipulate the results.

Nationwide, cases have climbed by roughly 58 percent over the past two weeks

So what? Cases mean nothing.

Beats the living hell out of a case of myocarditis.

So woke senior USAF officers piss away $1.2 million plus in education costs and 4 highly trained young officers for the sake of a long-since outdated political ploy.

Cadets and Midshipmen at the academies and in ROTC on full scholarship are not obligated to any service until the first day of their second class year… I wonder how many are resigning now on that day as they look at this.

I know recruiting and retention in all services are down.

If the AF chooses not to swear them in, that’s the AF’s business.

If the Academy chooses not to graduate them, when they’ve met all the requirements for graduation, then a good lawsuite is in order.

I agree with suing the hell out of the AF if they didn’t graduate qualified Cadets.

The individuals who made the decisions should be answerable to the taxpayers for that, as is dishonorable discharge with loss of all pay and benefits (after their trial of course). Hey, they didn’t mind ruining someone else’s career so cry me a river.