If you could kill Alito and Thomas “should you do it while Biden can get his nominees to replace them confirmed?” 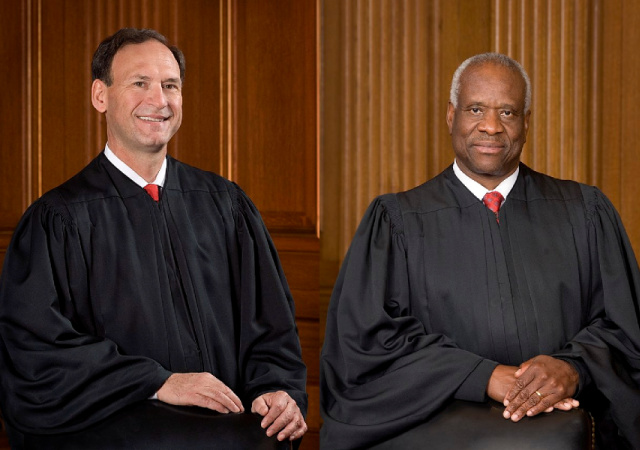 British gaming journalist Simon Gwynn wants to know if you would murder SCOTUS Justices Samuel Alito and Clarence Thomas if you had the chance. 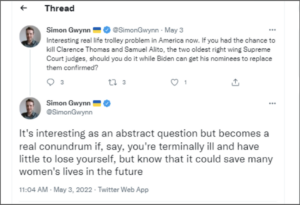 Instead, Gwynn described it as a “thought experiment.” He also doesn’t think Twitter is the place to have such experiments.

I've removed my recent two tweets about the US Supreme Court as on reflection they're obviously pretty irresponsible, though I don't think they would be against Twitter's TOS.
FYI I don't endorse murdering anyone, but don't think there's anything wrong with thought experiments.

Twitter is not often a good place for them, however.

Disturbing. Also disturbing is how overturning Roe v. Wade has broken so many people.

The fact that these people have no problem saying these thoughts out loud…I fear for humanity. I wonder what they’re not saying out loud.

People like Gwynn also brush aside women who have had abortions. The majority of them are alone, afraid, and think abortion is their only option. A lot of them regret their decision and feel guilt and anger for the rest of their lives.

What is wrong with these people?

Final point: It’s not even official! People like Gwynn have lost their minds just because Roe v. Wade could be overturned! I cannot even.

Yet they banned Trump….just wow….

If you could kill Alito and Thomas “should you do it while Biden can get his nominees to replace them confirmed?”

No brainer for the left. They have no compunction murdering the unborn. Millions in the USA since 1973. Multi-millions worldwide. What’s two old guys (even if one is black)?

AKA…The Pelican Brief. The Left wouldn’t survive the chaos that would result. Having illegally gained the majority in the Senate and the Executive…. grabbing SCOTUS would be beyond stupid.

How so would it be stupid. If they can control the judiciary they then have the trifecta to do whatever they wish. The Executive, the Legislative, and the Judicial all controlled by the democrats. That would effectively end any checks & balances between the three branches of government that has existed since the ratification of the current U.S. Constitution. Of course, you’re correct that it would lead to out and out chaos across the country. But if you haven’t noticed lately the democrats don’t seem too worried about the chaos and destruction they’ve caused in their quest to garner as much power over the country as they can.

So yes, at this point they’ll do everything in their power to grab control of the SCOTUS. Schumer is so confident they can control the SCOTUS he even told us how they are going to do it on the floor of the Senate no less. They will contrive to impeach the Conservative justices for “lying to the Senate” and then will install their own puppet justices to insure they always get the correct decisions from the highest court in the land.

your forgot the what 60k seniors they killed in nursing homes/extended care facilities. they knew what would happen, levine mother was moved out of one and reportedly put into a hotel when they did that

Pre-war Germany blast from the past: it’s here!

Couldn’t agree more with you. Do you think they give a flying fig about humanity? They probably have difficulty even pronouncing the word.

We’ve seen their hideous behaviour when they are threatened with losing the ability to kill those helpless little beings and the fact that those deaths are incredibly painful for an extended time doesn’t seem to give them a moment’s thought of regret or empathy. Can we even call them human?

Margaret Sanger would be SO proud!

I am 99.999% sure that Thomas didn’t vote for Joe so neither one would be considered black by Democrats.

(even if one is black)
Heck, that’s a bonus. After all, they murder more black babies by percentage than they do white ones.

That ironically means that Hillary would surely have been President in 2016 (with a higher percentage of black voters) – and re-elected in 2020.

But would they actually be confirmed? Would the Democrats have 50 Senators, or just 49 (-Manchin) if this happened? I don’t think they would get Murky or Collins. And consider that if Sen Leahy dies of old age, a Republican governor gets to appoint his temporary replacement. I think if a leftist did this, SCOTUS would be down to 7 Justices for 3 years.

It’s where the power is, and you can’t vote for it or against it.

You can always, always vote from the rooftops.

I did vote for it. The supreme court was a top reason for my vote for Trump in 2016. That Hillary Clinton is a petty evil conniving bitch was the other one but there you go.

If Hillary Clinton had been aborted, TENS OF THOUSANDS of people (many women) would not have died by violence in the Middle East.

If Barack Obama had been aborted, America would not be on the edge of a cliff, and HUNDREDS OF MILLIONS of people (many women) would not have died but for the loss of America as a stabilizing force on the planet.

If Alexandra Cortez was aborted, New York would have been short one barmaid. (No women’s lives saved.)

Confirmed, still and again –
Kaiser’s Maxim: The Left will always, eventually, resort to violence, threats of violence, or glorification of violence to advance their agenda. Always.

Since he likes thought experiments, here’s another one – you step into an elevator and are surprised to see that you are with Hillary, Bernie, and Joe. You have a gun, but only two bullets.
Q. Who do you shoot?
(this is an easy one)
A. Hillary, Twice, just to be sure.

I disapprove of this kind of humor. Really I do. But I laughed anyway.

I disapprove of this kind of humor.

To bad you left your wooden stake, garlic cloves, and holy water at home.

Better yet: save the bullets, grab Bernie by the ankles, and beat Clinton with him till their both room temperature.

Even doing the above and putting a stake through her heart, I doubt would kill her.

Since she is clearly running in 2024 for the rematch with Trump, that is obvious.

Will no one rid me of this troublesome priest?

We are literally two very different and hostile peoples inside one, kinda-sorta, set of borders. There probably is not going to be a reconciliation. As far as the question is concerned, EVERY Democrat and much of the GOPe would go with the murders, happily.

You’ve left out the equation of our government in a plot against us.

The fact that these people have no problem saying these thoughts out loud…I fear for humanity. I wonder what they’re not saying out loud.

Uh … Western leftists have been like this since … forever. Start at teh French Revolution and follow the fun from there.

If you don’t know what they’re thinking but not saying then you haven’t been paying attention at all, Do you think that the insurrectionist riots of 2020 where just happenstance taken on by unwilling people who had any sense of decency in them?

The Western Left are a bunch of self-hating nihilists who want to leave our society nothing but a smoking pile of ash. They hate everything and want to make all of us normal, happy people pay for the misery and emptiness of their lives and for they’re ever having been born.

It’s not a secret.

Also disturbing is how overturning Roe v. Wade has broken so many people.
No. They were already broken. This just gave them the opportunity to demonstrate it. Loudly.

Just imagine if George Floyd and Anthony Fauci had been aborted: what trouble we would have been spared.

“FYI I don’t endorse murdering anyone, but don’t think there’s anything wrong with thought experiments.”

Yeah, Simon, you do endorse murder. Free hint, if your “thought experiment” involves murder then you stop, because the answer is NO.

Freedom of expression is very important to me. An example of a protected thought experiment was writing the book “The Pelican Brief.” It is a good book and I recommend it.

Having a debate or class discussion about the ideas raised in that book is a proper and protected activity.

Taking overt steps to implement those ideas in planning an actual crime is not protected. Prosecutors and law enforcement officers are carefully trained to understand the difference.

Now we have Twitter. First, it features communications between people using fake names. Second, it is moderated by untrained people and robot programs. Third, the format limits the length of your posting thereby minimizing the nuisance of your message and maximizing the confusion created.

“Prosecutors and law enforcement officers are carefully trained to understand the difference.”

LOL, y’all are some of the dumbest SOB’s on the planet.

“Carefully Trained” to oppress freedom and liberty, with a few exceptions including our host. Just about every person serving in congress has a “law” degree. Enough said.

For those of you unfamiliar with Gamergate it was the precursor to how the media treated Trump – constant lies, accusations and attacks from the gaming media towards computer gamers, including (and evidence was provided) members of the gaming media creating harassment campaigns against themselves so that they could blame others and play the victim card.

Since then the mainstream games journalism industry has been almost nothing to do with computer gaming and entirely about virtue signalling and supporting causes du jour.

So does it surprise me that a games journalist (British or otherwise) thinks murdering a judge is a valid topic of discussion? Not remotely. In fact I think the only reason he’s withdraw the tweets is that someone’s reminded him that UK law takes a very dim view of such comments.

And the “gaming journalists” STILL can’t let go of a movement that died over 5 years ago. Talk about beating a dead horse.

I stopped paying attention to them in 2007 when a reviewer got fired from Gamespot for poorly rating Kayne & Lynch, and the publisher had turned the site into a K&L shrine due to a massive amount of advertising dollars being dumped into it. I now just look at YT and steam reviews of games before I bite the bullet on anything.

Compare any of the streamers results to gaming media; gamers rejected “gaming media” which now exists as an arm of leftist parties that on occasion does token “gaming” journalism consisting of rewriting a press release..

Oh, it ended several years ago, after the point was made by gamers to various companies. Don’t piss off your customers for a loud, whiny minority. A lot of the game jouro websites are absolutely struggling with trying to keep the lights on, as more and more people are going elsewhere to get information on upcoming games. They made their decision to deride gamers, gamers didn’t like it, and they have shocked Pikachu faces when their employers lay them off or shut down.

As a Christian and a Brit, I can answer that.