After 100 Monkeypox Cases Reported in Europe, WHO Calls Emergency Meeting

After 100 Monkeypox Cases Reported in Europe, WHO Calls Emergency Meeting

What should be of most concern for most people is that WHO is beginning to make recommendations for restrictions. 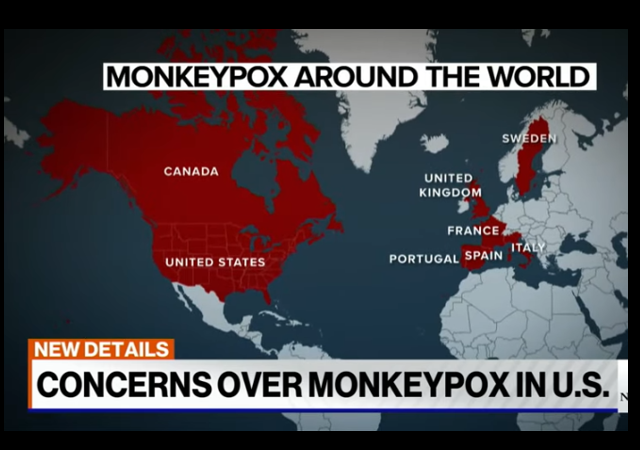 I recently noted that there were over a dozen cases of the usually rare viral disease being reported from Europe, and one known cases observed in Massachusetts.

The number in Europe has now topped 100, and the World Health Organization (WHO) is calling an emergency meeting.

In what Germany described as the largest outbreak in Europe ever, cases have been reported in at least nine countries – Belgium, France, Germany, Italy, the Netherlands, Portugal, Spain, Sweden and the United Kingdom – as well as the United States, Canada and Australia.

Spain reported 24 new cases on Friday, mainly in the Madrid region where the regional government closed a sauna linked to the majority of infections. read more

A hospital in Israel was treating a man in his 30s who is displaying symptoms consistent with the disease after recently arriving from Western Europe.

Monkeypox causes a wide array of symptoms (headaches, muscle aches, fever), but is most noted for skin lesions that are usually seen after 1 7-14 day incubation period. Normally, there are few cases detected outside of Africa.

More than 120 confirmed or suspected cases of monkeypox, a rare viral disease seldom detected outside of Africa, have been reported in at least 11 non-African countries in the past week. The emergence of the virus in separate populations across the world where it doesn’t usually appear has alarmed scientists — and sent them racing for answers.

“It’s eye-opening to see this kind of spread,” says Anne Rimoin, an epidemiologist at the University of California Los Angeles, who has studied monkeypox in the Democratic Republic of the Congo for more than a decade.

… In an average year, a few thousand cases occur in Africa, typically in the western and central parts of the continent. But cases outside Africa have been limited to a handful that are associated with travel to Africa or with the importation of infected animals. The number of cases detected outside of Africa in the past week alone — which is all but certain to increase — has already surpassed the number detected outside the continent since 1970, when the virus was first identified as causing disease in humans. This rapid spread is what has scientists on high alert.

The authorities said little about the patient, who is currently in isolation at Bellevue Hospital, according to a statement from the city health department. The patient arrived to the hospital Thursday, according to one official.

If WHO officials are gearing up to use the surge in monkeypox cases to rehabilitate their reputations of their wretched covid respons, they should reconsider.

Great.. can’t wait to see how well they handle this one… https://t.co/plAlddU3vX

And, as a reminder, the lockdowns that ensured after covid spread from Wuhan, China, had minimal impact on actual mortality, but enormous societal consequences (that we will be dealing with for years, if not decades).

Economists who carried out a meta-analysis found draconian restrictions imposed in spring 2020 — including stay-at-home orders, compulsory masks and social distancing — only reduced Covid mortality by 0.2 per cent.

They warned that lockdowns caused ‘enormous economic and social costs’ and concluded they were ‘ill-founded and should be rejected as a pandemic policy instrument’ going forward.

The review, led by a Johns Hopkins University professor, argued that border closures had virtually zero effect on Covid mortality, reducing deaths by just 0.1 per cent.

At this point, I would rather hear what Swedish public health officials have to say about monkeypox. And perhaps getting the opinions from the authors of the Great Barrington Declaration would be worthwhile.

What should be of most concern for most people is that WHO is beginning to make recommendations for restrictions. For example, WHO officials are warning people about the dangers of attending summer festivals.

WHO regional director for Europe, Dr Hans Kluge] has said he is concerned the spread of the virus could speed up over the summer months as people gather for parties and festivals.

“As we enter the summer season in the European region, with mass gatherings, festivals and parties, I am concerned that transmission could accelerate, as the cases currently being detected are among those engaging in sexual activity, and the symptoms are unfamiliar to many,” Dr Kluge said in a statement.

Finally, it must be noted that the WHO emergency meeting is being called just ahead of a WHO assembly that will be discussing a possible Global Pandemic Treaty.

So an outbreak of Monkeypox occurs right around the same time that WHO are making a grab for power and we're not supposed to be suspicious about that at all?

Considering all the failures of WHO during covid, I personally would prefer a different approach to monkeypox should the virus have evolved to be more infectious. And I urge a lot more real science be used to assess how the virus is being spread, its real health risks to healthy individuals, and realistic recommendations for transmission prevention measures.

Frankly, I do not think WHO has done anything to earn our trust back, and perhaps we need to pressure our representatives to quarantine that treaty on a permanent basis.

Let’s see just how fast that fact gets buried and we are told that all of us are going to be struck down by the pox.

That’s the hype and it might very well be true as the cause of sudden spread so geographically wide. The issue then becomes contact tracing and widening the circle of sudden encounters without fear of being labeled an ‘ist’ or ‘phobe’. Fauchi and the CDC already failed that test with AIDS so I don’t have high hopes.

In any event the spread has almost certainly jumped to the wider community via sexual contact or close quarters exposure of another kind. We need better public knowledge on symptoms and types of exposure that lead to transmission. Not fear and over hyped doom a la Rona.

If they come out with a vaccine for monkeypox I will make sure my monkey gets it.

Smallpox vaccine works against it. So some of us older fold with childhood vaccines and subsequent boot camp vaccines are likely good.

The Small Pox vaccine is supposed to be good for three to five years and then a booster is recommended as the vaccine’s protection deteriorates over time.

I read this morning that those suffering were primarily homosexuals where the spread was through sexual contact and those involved had not been vaccinated for Small Pox (or a booster) within the last 3 to 5 years,

The rporting has generally been very careful in the way this is characterized. Can’t risk irritating the LGBTQ bunch by telling the truth just right out. Couching it in nebulous terms is far safer (except for those potentially exposed through ignorance).

This exact scenario discussed a year ago: https://www.thegatewaypundit.com/2022/05/weird-globalist-group-nti-predicted-likelihood-monkeypox-outbreak-november-2021-report/

It is almost like a powerful group manipulates situations in a horrible way, with catastrophic consequences for normal people, as a way to increase their wealth and power.

We should call it “Disney Pox”.

How about mid-term election pox?

This whole idea of the WHO being viewed by anyone as either competent or not comprised is laughable. The public health officials and some elite/establishment folks have zero idea how much credibility they have squandered with their asinine Covid response.

If many people in the US are unwilling to trust the CDC and in some cases Governors, Mayors and their own State and local public health officials why would they believe these folks would accept what the WHO had to say?

A great number of folks are still waiting on the public health community and certain politicians to confess their sins regarding Covid, perform contrition and only then ask for and receive forgiveness. Once done we might be willing to listen to them on another matter, but certainly not before.

They’ll be older than Dick an Dyke before that happens.

The converse is that the public health community will remain impotent and ineffectual unless they can admit their very clear errors with humility and a true sense of responsibility v pro forma ‘mistakes were made’.

Consider if this portion of folks is even 20% of the Nation. If they refuse to comply with the next round of pandemic mania then what? What if even 1% are actively hostile to the idea. That’s 3.3 million people willing to not only defy but potentially be aggressively opposed to lockdown. Cut that in half and it’s 1.65 million very PO people perhaps using the new standards of ‘peaceful protest’. Might get ugly.

I’m not sure why we are not listening

Waiting for someone to ask the obvious question:

Have those who’ve contracted monkeypox had covid shots and/or boosters? It’s admitted that the shots have had a deleterious effect (which worsens with each subsequent shot) on the immune system… which in turn could make these individuals more likely to come down with the pox. Look up “VAIDS.”

I’m sure Fauci would consider it a “feature” rather than a “bug.”

In an article I read earlier today (Inside Medicine) was the tidbit that out of 89 cases where the gender was known all 89 cases were male. As of publication of the article there hadn’t been a single confirmed case in a female. Nothing was mentioned of non-binary. Draw your own conclusions.

If it’s primarily an African disease, how many of the afflicted are from Africa? If it isn’t transmitted via air why is there any talk of an “outbreak”?

Monkeypox is primarily transmitted by direct contact with infected animals, meat, sores/bodily fluids, and people. Does not appear to be an airborne virus. So lockdowns would be stupid. That is probably why that is exactly what the WHO will try to do.