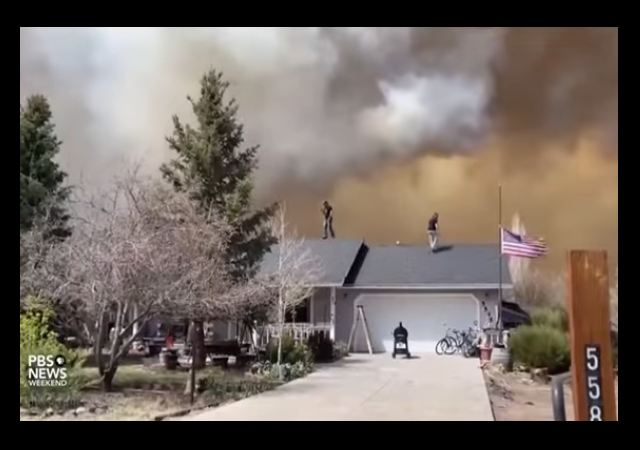 Wildfires burn throughout Arizona, Nebraska, New Mexico, and Texas, destroying more than 130,000 acres and causing evacuations from about 4,000 homes.

Corey Mead, a National Weather Service forecaster, said that Nebraska had seen “above normal” activity during its current fire season, and the governor of New Mexico, Michelle Lujan Grisham, said that the fires had come well before the beginning of the state’s wildfire season. “It’s going to be a tough summer,” she said.

…In New Mexico, Ms. Lujan Grisham said at a news conference on Saturday that the largest threat in her state was the Calf Canyon fire, east of Santa Fe, which put more than 900 homes at risk.

The Calf Canyon fire combined with the Hermits Peak fire, about 12 miles northwest of Las Vegas, N.M., at the base of Hermits Peak in the Pecos Wilderness. The Hermits Peak fire started on April 6 after “unexpected erratic winds” from a prescribed fire in the area caused the blaze to grow, officials reported.

Ms. Lujan Grisham said that more than 200 structures had been burned and that 1,000 firefighters had been dispatched. By Sunday, the Calf Canyon fire had burned more than 54,000 acres and was 12 percent contained.

One of the fires went through rural neighborhoods near Flagstaff. The conditions in Arizona are such that the fire threat has been deemed “not typical” and “on steroids.”

The combination of high winds, warmer temperatures and extremely dry conditions will make for an atmosphere that’s “pretty much on steroids”, said Scott Overpeck, with the National Weather Service in Albuquerque, New Mexico.

“This is not typical,” he said, looking ahead to what could be explosive fire growth on Friday. “This is really one of those days we need to be on our toes and we need to be ready.”

The weather conditions will complicate the firefight on a half-dozen large wildfires burning in the American south-west.

The man who died Friday night was a retired Cambridge fire chief who was working with firefighters as a spotter in Red Willow County in the southwestern corner of the state. Alyssa Sanders, of the Nebraska Emergency Management Agency, said 66-year-old John P. Trumble, of Arapahoe, was overcome by smoke and fire after his vehicle left the road because of poor visibility from smoke and dust. His body was found early Saturday.

Sanders said 11 firefighters have been injured battling the blazes, but she didn’t say where they were injured or how severe their injuries were.

Blazes have been reported in 12 counties in around the state since Friday. The state agency said they were still burning Saturday night in five counties in Nebraska’s southwest: Perkins, Hayes, Furnas, Red Willow and Frontier. The agency didn’t provide estimates of the total area that had been burned or the number of homes or other structures that had been destroyed.

And while “experts” will point the blame at “climate change,” here is a timely reminder that the root cause of these blazes is likely to be poor land management.

“Fires have always been part of our ecosystem,” said Mike Rogers, a former Angeles National Forest supervisor and board member of the National Association of Forest Service Retirees. “Forest management is a lot like gardening. You have to keep the forest open and thin.”

Federal forest management dates back to the 1870s, when Congress created an office within the U.S. Department of Agriculture tasked with assessing the quality and conditions of forests. In 1905, President Theodore Roosevelt oversaw the birth of the U.S. Forest Service, which manages 193 million acres of public land across the country.

“Those weren’t wildfires, they were deeply fearless acts of compassion by mother nature to bring attention to the climate crisis,” a Buddhist priest with knowledge of the situation told CNN.

And speaking of fires… there’s a widespread meme going around that US food distribution facilities are methodically but mysteriously burning to the ground, sans the smallest reportage by the Marxist press. What’s up with that?

It’s that damn Putin. He probably had a wicked witch cast a spell.

What you’re saying is no joke: this is going to hit hard next year. Have any of you here ever been hungry in your lives? Get ready for it.

re: that meme. What are the normal fires for food distribution facilities? Could be these are within the normal but suddenly everyone cares?

When they announced The Las Dispensas prescribed fire on the Pecos/Las Vegas Ranger District, everyone living in northern NM scratched their heads and said…what the hell? We’d already been under high wind warnings for days. When it blew up and became the Hermit Peak fire, not a single person was surprised. Tomorrow, winds will pick up again from the south and the fire will be heading towards Mora, NM which is under a mandatory evacuation. Some of our worst fires started out as prescribed burns. In 2000, the morons decided to run a controlled burn during drought conditions on the edge of the Valles Caldera. In the spring, when it’s always windy in NM. Of course the fire rapidly got out of control resulting in the loss of a couple hundred homes in Los Alamos as well as damage to some of the lab buildings.

You can always count on public employees to be incompetent and nobody ever gets fired.

But the Hammonds get 5 year prison sentences for controlled backfires on their grazing permit lands.

My math doesn’t seem exact…
But, 640 acres per square mile.

My back yard isn’t much smaller.