“Project Kuiper” launching as rival to the SpaceX satellite system that is already being utilized with success. 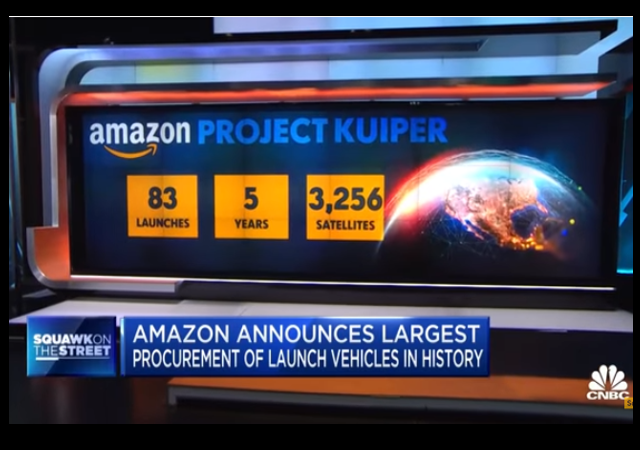 Amazon said it will partner with three companies to conduct as many as 83 launches over a five-year period to facilitate “Project Kuiper.” The service will purportedly offer fast, low-cost internet access to underserved communities around the world – the same goal SpaceX has set for Starlink.

Of the 83 total launches, United Launch Alliance, a joint venture between Lockheed Martin and Boeing, will conduct 38; European firm Arianespace will conduct 18; and Bezos’ private space firm Blue Origin will conduct at least 12, with an option for up to 15 more as needed.

“These launch agreements reflect our incredible commitment and belief in Project Kuiper, and we’re proud to be working with such an impressive lineup of partners to deliver on our mission,” said Dave Limp, Amazon’s senior vice president of devices and services.

Project Kuiper is Amazon’s plan to build a network of low Earth orbit satellites to provide high-speed internet to anywhere in the world. The FCC issued the license in 2020, and the company has said it will “invest more than $10 billion” to build. However, it is essential to note that, unlike Starlink, Amazon hasn’t even launched a test craft yet.

Amazon is set to begin testing a pair of Kuiper prototype satellites with a launch scheduled for late this year, launching on ABL Space’s RS1 rocket, before moving on to launch operational satellites.

Although Amazon has not said when the Kuiper launch campaign will begin, FCC rules require the company to deploy half of its planned satellites within six years – meaning about 1,600 in orbit by July 2026.

“We still have lots of work ahead, but the team has continued to hit milestone after milestone across every aspect of our satellite system. These launch agreements reflect our incredible commitment and belief in Project Kuiper,” Dave Limp, Amazon senior vice president of devices and services, said in a statement.

Amazon is going to have to race hard to catch up to Starlink. It is being reported that Ukraine is now using over 10,000 Starlink dishes to help bring the internet to war-torn areas across the country.

“So, right now, it’s more than 10,000 units in Ukraine,” Alex Bornyakov, the country’s deputy minister of digital transformation, told The Washington Post in a video stream on Tuesday.

According to Bornyakov, the Ukrainian government has been installing the Starlink dishes in areas hit hard by the Russian invasion. This includes the cities of Chernihiv and Mariupol, which the Russian military have attempted to take over.

The US Air Force is currently testing high-speed communications options to support their F-35A fighter jet in remote locations, and Starlink is one of those options being tested.

What makes the Starlink setup ideal for their use is the fact the required equipment can fit inside the F-35’s travel pod, and the system can be operational in less than 10 minutes and set up by any trained Airman.

“Really, what we want to have is options for communications. We don’t have the infrastructure in every possible location, but with this we could go to SATCOM or cellular LTE and then go to offline capabilities as a last resort. The fact that anyone can be trained to set it up gives us more manpower options and brings another element to creating Multi-Capable Airman,” said 1st Lt. Corbin Meredith, 388th OSS.

In their testing they found Starlink more than capable compared to the current military satellite internet capability, which not only requires a longer lead time to be set up, but also does not transmit data fast enough for remote F-35 operations.

I wish the Amazon team a ton of good luck with “Project Kuiper,” and I offer Musk prayers for strength and courage as he wades into the sewer that is Twitter.

“… unlike Starlink, Amazon hasn’t even launched a test craft yet.”

That was the problem with Amazon’s submission for the moon lander too. SpaceX, on the other hand, submitted a plan for vehicles that not only exceeded specifications and also EXISTED already. Plus Amazon wanted money upfront and cost a lot more. So Amazon announcements are far from being accomplishments. Bezos must be angling for more taxpayer handouts.

Since then, Amazon suffered a brain drain of engineers and scientists who fled to Space-X. At least Blue Horizon can claim that they put the first. oldest, and chubbiest Canadian in space for 5-10 minutes.

From the look of Bezos’ left eye it appears to be vapor lock.

Meh, most of the kuiper guys I’ve worked with are ex spacex/starlink or ex oneweb. They’re behind, but they know what they’re doing and moving fast. kuiper design is harder than what starlink is now (w/o laserlinks), but will also be more capable (more users per sat). Also, kuiper has nothing to do with blue origin.

After funding Black Lives Matter to the tune of BILLIONS of dollars, we can only hope one of Bezos’ rockets crashes on his head. And as soon as possible.

“I offer Musk prayers for strength and courage as he wades into the sewer that is Twitter.”

Going where no man has gone before.

Clear this through your biologist.

That would be a small step for man but a giant leap for anyone planning to go on the Supreme Court.

The problem with Musk is he has no alliegence to America.
He’s in neck deep to China

Baloney. Musk is a Texan and a proud African American.

He is as Ameican as apple strudel.

I wonder how all those satellites will affect the Left’s “climate change” problem.

You put up enough satellites, you shade the Earth and drop temperatures. Problem solved!

How much you want to bet the unstated reason for this endeavor is to track every human being?

Never forget that the elites (including Big Tech) have a hard on for controlling the rest of us peons.

We are already in the early days of the Fourth Reich. We are moving on from “The Big Reset” phase to “The Big Narrative” phase. Everything is in place. And no one talks about even though the Fuhrer Klaus Scwhab is out there writing books and making speeches explaining everything to us. We sure be dumb.

We are on the side of NAZIS in Ukraine and US troops are openly arming and training them.

What is wrong with you?