Decency has totes returned to the White House. 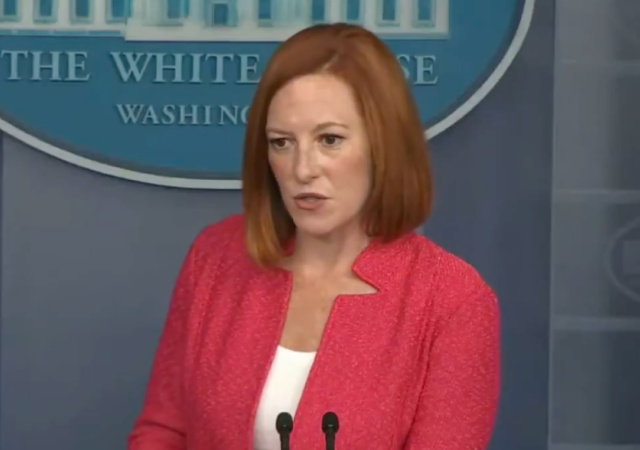 Biden called Fox News’s Peter Doocy a stupid son of a b*tch when he asked the president about inflation.

The issue came up on Thursday night when Press Secretary Jen Psaki appeared at a live recording of Pod Save America, which is run by a bunch of former Obama people.

Doocy asks Psaki a lot of hard-hitting questions. He irritates her and the whole administration.

So the hosts of the podcasts asked if Biden addressed Doocy correctly. Psaki used it to take a swipe at Fox News.

Jen Psaki is asked if “Peter Doocy is a stupid son of a bitch or does he just play one on tv:”

“He works for a network that provides people with questions that, nothing personal to any individual including Peter Doocy, but might make anyone sound like a stupid son of a bitch.” pic.twitter.com/2FYMPX12Rr

Fox News issued this statement: “In his role as White House correspondent, Peter Doocy’s job is to elicit truth from power for the American public. His questions are his own, he is a terrific reporter and we are extremely proud of his work.”

Then Psaki said Doocy “was gracious after President Biden called him and apologized.”

The arrogance and snobbish attitude displayed by these people never fails to blow me away.

Part of her performance art to join MSNBC?

She really sets back women, showing the world what ‘real bitch’ is.

This woman is disgusting.

I get it.. but there is nothing real about her.

I have always had a preference for red heads…until she oozed onto the stage. It may take me years, okay months, to recover once she has slithered off.

Lying, useless, reprehensible piece of garbage. Peppermint Patty is a perfect spokes mouth for this administration. She couldn’t tell the truth if her life depended on it.

No more questions, peasants! Doesn’t anyone have any flattery to offer?

Yeah, her comment out of context could be interpreted as Doocy making HER look like the stupid SOB.

Little? Yes
Red? Yes, that too
Lying? Most definitely
Hood? Well, she could be. Who knows?

When I read the headline, that was my first thought.

That’s because she is a stupid SOB.

“Stupid SOB” I think she is referring to her son who is not very smart.

The left hasn’t cared to show respect for anyone or anything for most of my life. This is just more of the same.

Biden called and apologized….well that solves everything, doesn’t it? I mean he gets his little twitterverse moment with absolutely ZERO pushback from the leftist controlled social mediaverse and he said he was sorry quietly so everything’s good now. What a great leader Biden is and Doocy is just so darn lucky that Biden was gracious enough to call and apologize to him for pointing out Doocy’s obvious flaws on tv.

Times that the press wanted to go to war for Acosta = too many to count, particularly when his press pass was at stake.

I don’t think people are capable of being naively partisan in this way…it’s deliberate and known. They are at war and we have to engage as well….in a smarter strategy.

Maybe Doocy was momentarily confused and thought he was playing a stupid son of a bitch on TV and asking his mother a question?

As to the $1.9 trillion relief bill that Biden got passed, widely believed to be a major factor in this inflation ….. that is roughly $6,000 cash for every man woman and child in the country, paid directly or indirectly over a relatively short period. No wonder we have inflation near 15%, if measured correctly, as in the 1970’s.

I think that’s the name of a game psychos play who follow the pied piper wherever she goes.

Just like Stephanopoulos, Psaki is going to go work on the national news as an “objective, nonpartisan reporter.” And the mainstream news will act as though she’s objective, which she never will be.

Has Jen Psaki blamed Putin yet for Elon Musk trying to buy Twitter?

There’s a video of Musk watching hookers pee into the space capsule John Glenn went up in.

Of course not, everyone knows that´s Trump´s fault.

He asks questions she can’t answer and he’s the stupid one?

We all already know Joe’s favorite ice cream flavor. What else can you ask that snowflake that won’t trigger her?

She is a condescending bitch. A horrible person living in a liberal bubble. She is the bitch that demands a discount because of who she thinks she is. Can’t wait for her to go to msndc so that I won’t have to see or hear that awful person again!

Moe was right, but Curly really hit the nail on the head when he said, “She’s lower than whale poop.”

If she put her dog on top of her car while travelling on the Interstate at 80 mph she would be approaching Romney territory. The only thing left would be to test her IQ against Candy Crowley.

SHE can’t handle REAL questions. She wants softballs like she gets from CNN, CBS, MSNBC, NBC, ABC PBS NPR ect..ect..e.ct.. Too bad a bolt of lightning wouldn’t strike her when she lies. Because she would be long gone by now.

I don’t follow sports at all.. but the mythical position of a hockey enforcer came to mind. Her job is to slam anyone coming after Joe. The fact that she clearly understands how impaired he is,, that is what gets me.
When she is on TV I have to mute it.. she is that disgusting.

I thought being disrespectful to the press was a threat to democracy. I guess that depends whether you have an “R” or “D” after your name.

Also, calling someone a “Son of a B*tch” is insulting a person’s mother. Using the left’s playbook, I’m thinking that’s misogyny, no?

(BTW, the link is a crap site. It’s from the “Committee to Protect Journalists” and there isn’t one mention of Biden calling Doocy a SOB”)

True… However, in your case, Jen, it doesn’t take much effort on Peter’s part!

Except, Red — Fox News doesn’t “provide“ questions to its reporters; they get to write their own. Shocker, I know!

So now she has graduated to using big person curse words. The last refuge of a weak mind.

Like when the ask her to explain Joe’s lies?