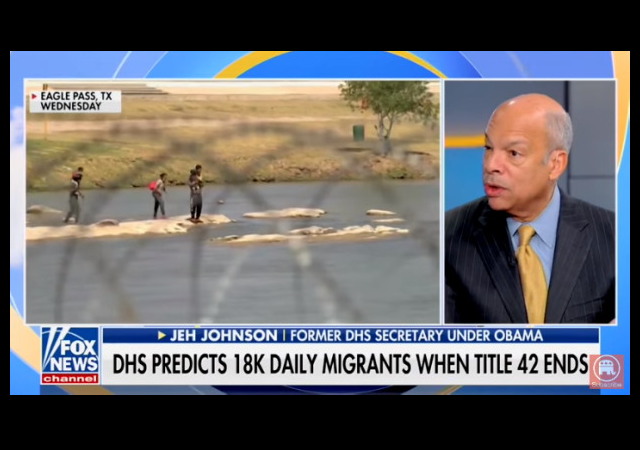 The situation at the southern border is out of control and it will get worse if the Biden administration reverses Title 42.

Even Obama’s DHS Secretary Jeh Johnson is speaking out against the idea.

Obama’s former DHS secretary: ‘We have to enforce border security’

Department of Homeland Security (DHS) Secretary under President Obama, Jeh Johnson, is convinced a majority of Americans do want a “secure border” but warns the current trend of migrant encounters is not “sustainable.”

“Most Americans, I believe, want to give people who’ve been in this country for 10 or more years an opportunity to get on the books, but most Americans also want a secure border,” he continued.

The Biden administration is expected to end COVID-related border policy Title 42 in May, which officials warn will likely spur an additional influx on an already-strained department…

“Seven thousand a day is not sustainable in multiple respects,” Johnson stated. “It overwhelms the Border Patrol and ICE and their ability to keep up with these numbers, and obviously, it overwhelms the Biden administration politically.”

Democrats in vulnerable seats are also against the idea.

Moderate Democrats are undercutting the Biden administration’s months of careful messaging on Title 42 that cast its retention of the Trump-era policy as a public health necessity rather than a border management tool.

The Centers for Disease Control and Prevention (CDC) announced Friday it would on May 23 rescind the order that blocks migrants from seeking asylum in the U.S. as the country learns to mitigate the effects of the coronavirus pandemic.

But rather than view it as a public health victory, some moderate Democrats see a huge political liability, leaving them furious that the White House ended policy ahead of a tough midterm election…

Sen. Joe Manchin (D-W.Va.) called it a “frightening decision.” Sen. Mark Kelly (D-Ariz.) called it “wrong.” And Sen. Maggie Hassan (D-N.H.) said the Biden administration “does not appear to be ready” for the surge in migration that could result. Kelly and Hassan both face difficult reelection battles in November.

As bad as the assault on the southern border has been, it’s amazing to think that Biden could somehow make it worse.

We HAVE a “southern border” that could be sustained??!!??

No wonder they didn’t want him speaking at Vassar College. He’s more conservative than Mitt Romney.

I thought his son was the speaker.

They’re doing it BECAUSE it’s not sustainable. Cloward and Piven.

My guess: Johnson is saying what he’s saying because he’s seeing a Red tsunami approaching shore at increasing speed.

Emigration reform to mitigate the progress of [catastrophic] [anthropogenic] immigration reform and collateral damage at both ends of the bridge and throughout. #HateLovesAbortion

Jeh Johnson is a racist, a bigot and an idiot.

and doing the right thing, for a moment

“Most Americans, I believe, want to give people who’ve been in this country for 10 or more years an opportunity to get on the books . . .”

If they’ve been flaunting the law for 10 years, I fully agree. “Book ’em, Dano!”

yes, but it’s flouting not flaunting

Actually, all this is meaningless. If the government wanted to stop illegal immigration, they’d do it, regardless of Title 42, or any other rule. If the law was in the way of stopping it, they could change the law. Open borders is the policy of this government and it doesn’t matter to them what the law is — they intend to attract illegal aliens by the millions.

Seems Trump never had this problem once he got things underway, supporting ICE, The Border Patrol, and building the big beautiful incredible wall.

These clowns take something working, screw it up by removing said working items, then say it’s not fixable. Jeh is another Dem moron who is in way over his head. He and Harris should bunk together, keep the idiots in one place to keep them from doing any more damage.