“In so doing, Benjamin abused his authority as a New York State senator, engaging in a bribery scheme using public funds for his own corrupt purposes.” 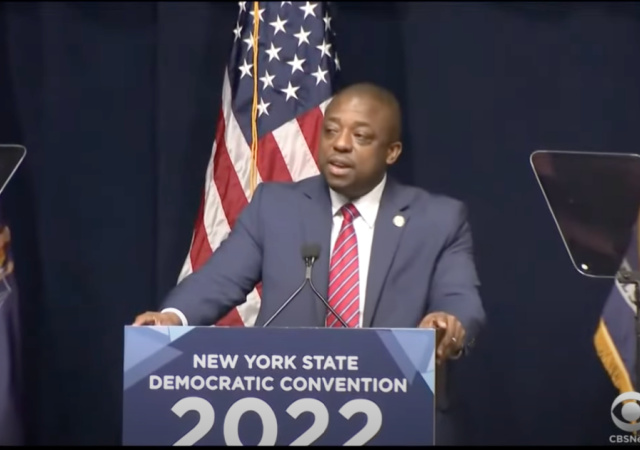 I guess New York Democrats want to be as corrupt as those in Illinois. You have a long way to go, Albany. Illinois had and has former governors in jail!

Lt. Gov. Brian Benjamin faces a federal indictment including charges of bribery, fraud, and falsification of records connected to a previous campaign when he served as a state senator. From The New York Times:

“In so doing, Benjamin abused his authority as a New York State senator, engaging in a bribery scheme using public funds for his own corrupt purposes,” prosecutors charged in the indictment. The investor was arrested on federal charges in November.

The indictment — the result of an investigation by the F.B.I., U.S. attorney for the Southern District of New York and the city’s Department of Investigation — also charged that Mr. Benjamin subsequently “engaged in a series of lies and deceptions to cover up the scheme,” including falsifying campaign donation forms, misleading New York City authorities and giving false information as part of a background check to become lieutenant governor last year.

Benjamin admitted to The New York Post in March that federal investigators about the scheme:

Benjamin spoke with federal prosecutors about conspiracy and wire fraud charges filed in November against Harlem landlord and lawyer Gerald Migdol, who is accused of making illegal, “straw” donations to Benjamin’s campaign.

In November, Migdol was arrested for allegedly orchestrating a scheme to funnel illegal campaign contributions to Benjamin’s 2021 Democratic comptroller primary bid. Migdol made contributions by money order in names that were not his own and reimbursed donors who gave money to a comptroller candidate from 2019 to 2021, according to the indictment.

Gov. Kathy Hochul chose Benjamin for his position and her running mate for this election last August when she took over for disgraced former Gov. Andrew Cuomo.

I doubt Hochul will keep Benjamin on the ticket. She came under pressure about her decision when told the feds questioned Benjamin.

Benjamin will remain on the ballot in June against two primary challengers. The Democratic Party chose him as their designated nominee, which means “his name can only be removed at this point if he were to move out of the state, die or seek another office.”

It’s getting hard to tell the difference between perps and politicians these days.

That’s no fair. You cheated. Must have looked at the answers or something,

In most cases it’s easy. Perps get booked and released – politicians never get booked.

Here in NY there is no difference

In the UK the holders of the two highest political offices in the land (i.e. the Prime Minister and the Chancellor of the Exchequer) were both issued with a Fixed Penalty Notice – basically a fine for breaking the law.

Neither of them are appealing against it.

Given the complexities of campaign finance laws, I think even New York is looking good in comparison.

Although.. one of the fines was issued to the Prime Minister for attending an illegal gathering, which was a surprise birthday party (so he didn’t know about it in advance) and that was held in his normal place of work, and that he attended for under ten minutes. It’s a bit of a stitch up.

What is the over and under on when he plays the race card?

And in shreds from overuse.

The same odds he has already reached out to Jessie Smollett’s legal team.

‘Indicted’ is a term created by the White power structure to trap Black men just trying to get ahead.

Sir here are your winnings.

“Oh, thank you very much”

Might his last name have contributed to all this? The Benjamins made him do it?

What would really shock would be finding a demonrat politician that is CLEAN! What would happen if The Rinos were ousted and Conservatives ran a stethoscope up the asses of every sitting democrat in the House, the Senate and the Supreme Court as was done to President Trump?

Clarence Thomas would come out clean, not that he’s a D, but don’t bet on any of the others in the Supreme Court, particularly the ones appointed by that dunce Barry and F. Dementia Joe’s potential pick!

This guy’s mistake was being a New York State senator, not a New York federal senator. Hillary is still skating.

By the vaporous gonads of the Holy Ghost! How blatant must the crime be if a Black, Democrat, in statewide office, in a Marxist state like New York can be arrested by the freaking Biden regime? There are multiple “get out of jail free” cards in play and the norm would be for it to be covered up with the eager help of the Democrat controlled MSM.

Only one crime rates this treatment: he must have inconvenienced a Democrat more powerful than him.

Could he have an older brother named Steve?

Latest report is that he’s resigned.