“You could secretly ban one party’s candidate or all of its candidates, all of its nominees. Or you could just secretly turn down the reach of their stuff, and turn up the reach of something else and the rest of us might not even find out until after the election.” 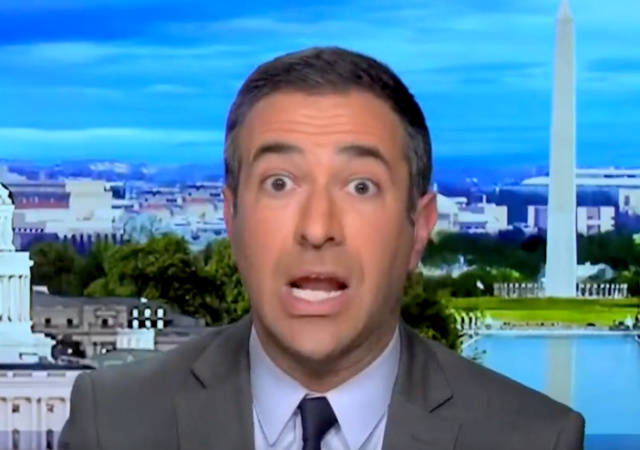 MSNBC’s Ari Melber proves once again that the Beltway folks live in their own bubble and have no idea what goes on in the real world.

Melber warned that Twitter’s new owner Elon Musk will do exactly what Twitter has been doing to the right and conservatives: shadowban, suspend, and downgrade.

There is truly nothing funnier than this MSNBC host ranting about what Elon Musk could do to Twitter, and accidentally giving a perfect description of how Twitter has actually operated for the last five years

ARI MELBER: The point is, people who work with this stuff, they understand how important this is. I’m not telling you need a Twitter account, I’m not telling you you have to jump in the ocean to study whether the ocean levels are rising. I’m just telling you this thing matters a ton. The world’s richest person who is very good at accumulating wealth and power thinks this is worth spending tens of billions of dollars on because frankly he thinks it’s that valuable and he thinks it may help him. Trump, by the way, today is claiming he won’t even return to Twitter if the ban were lifted but few take what Donald Trump says seriously on that score.

So, what is happening here? This is far bigger than Trump or Elon Musk. They are symptoms of the world we’re living in where technology has outpaced any of our ability to deal with it. That’s true whether you’re a parent trying to figure out what you can and can’t let your kids do at various ages.

It’s true if you are a democracy like the United States that used to regulate media ownership and say Rupert Murdoch can’t have too many local TV stations and newspapers in one town, they have laws for that are still on the books but the Congress hasn’t gotten around to limiting whether someone can own all of Twitter.

And as we discussed in one of our special reports just last week, if you own all of Twitter or Facebook or what have you, you don’t have to explain yourself. You don’t even have to be transparent. You could secretly ban one party’s candidate or all of its candidates, all of its nominees. Or you could just secretly turn down the reach of their stuff, and turn up the reach of something else and the rest of us might not even find out until after the election.

Elon Musk says this is all to help people because he is just a free speech, philosophically clear open-minded helper, a world helper if you will. Is that true? Should you take him at his word? Should you care about this whether you have a Twitter account or not? This is important stuff.

I follow my old boss’s advice: More voices. I hope Elon doesn’t ban or target the left and Democrats. Free speech means free speech, even for those with different views from our own and gross beliefs.

But the lack of self-awareness presented by Melber never ceases to amaze me. These people are ignorant and stupid. They’re losing a place where they can dominate the conversation and silence all critics.

Never heard of this guy but that’s just me. Looked him up. These are the benefits of his kind of stupid:

•a presidential candidate, high-level campaign role
•an Ivy League law degree
•a national TV show
•praise from the NYT for being “among the best” interviewers around.

It appears that he has a mid2 dight IQ.

He assumes that everyone is as dishonest and unprincipled as he and his colleagues’.

Melber isn’t upset that these things can be done but that the other side can now potentially do it. He would be perfectly fine if the left continued to have the power to do it.

Leftist, ignorant, and stupid is no way to go through life, son.

Every time I pay attention to these paid “readers” or paid “experts” in the news world all I learn is that I’ve been a chump all these years. I, too, could simply utter talking points and make nonsensical observations and be paid handsomely. There even seems to be a supply shortage since cable news will gladly bring dozens of new faces on throughout the day to say the same silly crap.

This, from someone who should know…

“Journalism is a low trade and a habit worse than heroin, a strange seedy world of misfits and drunkards and failures.”

Thompson was a journalist and writer who wasn’t as fortunate to practice his crafts when demand was higher than supply. The reverse is true now, but because of politics even the oversupply is paid eye popping amounts.

He could target Democrats but so what??? What’s your point? Are you going to pretend that Republicans haven’t been targeted?

By the left’s standards of soft science data, correlation implies causation. The fact that far more Republican accounts have been banned or shadowbanned than Democrats PROVES that Twitter was targeting Republicans.

To this weasel, I say turnabout is fair play.

Before someone like fatty comes in with his ridiculous take, let me save you the embarrassment.

FYI, this is an article that covers any elected official but note that ALL have been republican and most are by twitter:

Free speech is to left wing ideology what sunlight is to vampires.

For the same reason

So, basically he’s afraid that Musk MIGHT do to the communists what Twatter has verifiably done to conservatives?

And they refuse to acknowledge the irony of that

Oh no, you mean as Rasputin did to Conservatives when he ran it? Irony just isn’t the left strong suit.

He looks like a Jeff Toobin fellow traveler. He writes much about reaching. A man’s reach should exceed his grasp, especially during a Zoom meeting.

These jerkoffs loved Clinton for a reason..

Clinton was a jerkoff too.

He had Monica for that.

We should listen to these bozos carefully. They all have guilty consciences, and the’ll tell us exactly how Twitter and the “news” need to be fixed.

“Accuse others of what you do.”

And as tempting as it might be to target Democrats now, I’m sure they’ll do a fine job of sabotaging themselves.

We know that will happen. That’s why they went after LoTT. Too many independent voices, even when those voices are progressive, becomes a liability.

I find amazing the inability of these people to recognize their own cognitive dissonance. It’s not that they don’t realize what Twitter has been doing, because they have celebrated it. But now they sincerely react as if the situation presents novel risks, never before encountered by anyone, and someone must prevent it from happening because “democracy”.

Projecting all over the place.

Imagine the response if Musk next announces his intent to buy Dominion Voting Systems.

Anyone capable of rubbing two or more brain cells together: Good!

Hope Musk saw this.
Someone should thank him for putting the concept in front of him and the public

It would be nice for Twitter to focus on discouraging users who lie at the top of their lungs, attack other people for just disagreeing with them, and try to destroy the lives of their enemies….

Hm… He may have a point. Democrats should be worried that their standard procedures are going to come under fire. Perhaps they will learn from their previous destructive actions and…. No, probably not.

To a self-aggrandizing careerist like Melber, treating other people fairly threatens his place at the public trough. Little piglets like Melber have been known to kill their siblings for less.