Netanyahu tells right-wing parties to “put aside old grudges and return to the national camp.” 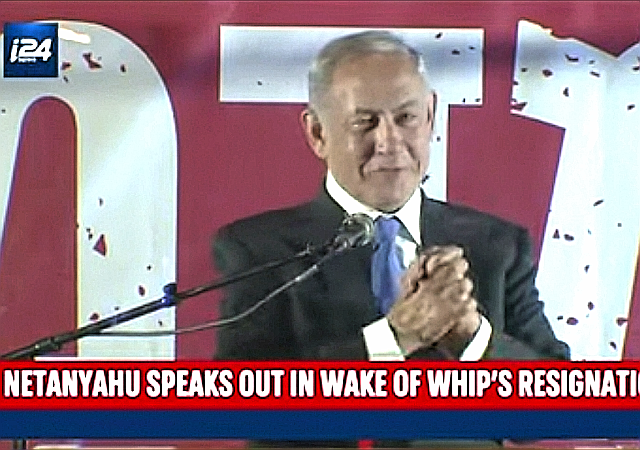 Israel’s opposition leader and former Prime Minister Benjamin Netanyahu is eying a return to power as Naftali Bennett-led coalition loses its majority in the parliament. The political turmoil began on Wednesday after lawmaker and ruling coalition’s whip, Idit Silma, resigned from the government and announced her support for a new right-wing alliance in the Knesset.

Silman accused Prime Minister Naftali Bennett’s coalition, which includes the Arab-Islamist Ra’am Party, of harming the Jewish identity of the country. “I will not abet the harming of the Jewish identity of the State of Israel and the people of Israel. I will continue to try to persuade my friends to return home and form a right-wing government,” Silman said. “I know I am not the only one who feels this way. Another government can be formed in this Knesset,” she added.

As proposed by Silman, a right-wing government can only be formed with the support of former Prime Minister Netanyahu, whose Likud is the single largest party in the Knesset with 29 seats.

Netanyahu congratulated Silman and urged right-wing parties in the ruling coalition to “come home” under Likud’s leadership. “I call on all those elected by the [right-wing] camp to join [Silman] Idit and come home. You will be welcomed with complete respect and with open arms,” he said.

The Times of Israel reported Netanyahu’s call for right-wing unity:

Opposition leader Benjamin Netanyahu attended a right-wing rally held in Jerusalem on Wednesday evening, calling on right-wing lawmakers in the coalition “to return home,” amid a coalition crisis that has revived his hopes of toppling the government and returning to power.

The rally, attended by thousands of right-wing activists, was originally meant to protest the rampant violence that has recently swept the country, with a wave of deadly terror attacks not seen in years.

But dramatic events unfolding since Wednesday morning shifted the focus of the event toward internal politics, with Netanyahu calling on Prime Minister Naftali Bennett to resign and urging unity among right-wing lawmakers.

He urged right-wing lawmakers in the current coalition to “put aside old grudges and return to the national camp,” referring to the political bloc led by his Likud party.

“Tonight, I want to tell you: It’s time for unity. It’s time to come home… Our door is always open. It’s open for anyone who was elected by votes from the right and wants to bring Israel back to the moral track, to the strong track, the winning track,” he said.

Prime Minister Bennett’s government lost the majority less than ten months after forming a coalition, ending Netanyahu’s 12-year tenure at the helm. The current coalition is an uneasy alliance of eight parties ranging from right-wing parties to the Arab-Islamist bloc. The broad coalition, widely seen as an alliance to keep Prime Minister Netanyahu out of office, came to power on a thin majority — holding 60 seats in a 120 member Knesset.

While it will be premature to eulogize the ruling coalition, the new development opens several paths to Netanyahu’s return to power. With other right-wing lawmakers threatening to leave the ruling coalition, Netanyahu could form an alternative government. If no alliance manages to prove a majority in the Knesset, the country will go through fresh elections.

Latest poll from today- "who do you want to be the prime minister"?
Benet- 10%
Netanyahu – 47% pic.twitter.com/YfBb8fPZ6p

Netanyahu’s Likud is leading in current opinion polls. “According to a poll by Channel 13, the Likud would earn 38 seats, Religious Zionist would earn eight seats and Shas and UTJ would earn seven seats. This would mean that Netanyahu’s bloc could earn 60 seats,” The Jerusalem Post reported Wednesday.

It always seemed a strange marriage to a less proficient outsider like myself.

I’m not surprised that Netanyahu is looking to pounce on any strains. He’s opportunistic and maybe the best choice for the job regardless of his warts….but what do I know.

But he hung on, and his colleagues didn’t oust him, so the stalemate remained the same and this ridiculous coalition has muddled through. And for at least a little while longer it still will, unless one more right-wing MK can’t take it any more and follows Silman.

It reminds me of the Republicans repeatedly electing McConnell and expecting a better result.

Meanwhile we’re stuck with Biden for another 3 years.

The mid term elections could change that thought process. Biden would be impeached, the Ho as well. There are several possibilities favorable to Conservatives that would put the US and President Trump back on track with Netanyahu on the flank in the ME to save the Abraham Accords and focus on Iran!

The next congress might impeach Biden, but the senate would never convict him. It’s impossible for the GOP to gain 17 senate seats this year, and they’d need more than that since at least one GOP senator would vote to acquit.

As for Harris, there don’t seem to be any grounds for impeaching her, so even a Republican House is unlikely to do so, and if it did the senate would certainly acquit her of whatever BS charge the House came up with.

Any grounds yet. If she becomes President, it won’t be long before her gross incompetence will be common knowledge.

There’s no way he’s going to be in office 3 years from now. The left has already decided that.

Seem they learn a lesson same lesson the tweet haters learned in America, better the devil you know.

Let’s see if israeli voters will support Bennett and his party who knowingly financed and armed an openly Nazi militia.

Bibi was a titan, a transformational leader. Israel would well to put him back in charge.

Bibi is a total squish, worse than Lindsay Graham. If you love Bibi but not Graham you’re simply uninformed.

The evil racist is on the court

Let’s see if someone actually steps down and retires

No, she is not on the court. Where on earth are you getting these ideas? She’s not on the court until Biden appoints her, and he can’t appoint her until there’s a seat to appoint her to. If Breyer changes his mind then this was all for nothing, and the Dems will be very upset at him.

Or, has a tragic accident.

The broad coalition, widely seen as an alliance to keep Prime Minister Netanyahu out of office, came to power on a thin majority — holding 60 seats in a 120 member Knesset.

No, a majority is 61. Without Silman, the coalition now has 60, which would not have been enough for it to gain government in the first place, but is now enough to prevent defeat. Netanyahu would have to lure one more member over in order to have a majority of 61.

With 60 votes the government remains in office, but will not be able to pass legislation without at least one vote from outside its ranks. Which will be inconvenient but not fatal. The budget has already passed, so they’re set for the year.

The thing is, if Netanyahu were really interested in the nation’s good, he could have prevented this whole mess and ensured a solid right-wing govenrment, simply by resigning the Likud’s leadership. Any Likud leader except Netanyahu could easily form a solid 70-80 member right-wing coalition.

The only reason he couldn’t form a majority was because there are about 20 right-wing MKs who have decided they simply can’t work with him, because they can’t trust him. His word is not a word. He has given up on ideology and will always say and do whatever he thinks will bring him power. He condemns the government for resting on Ra’am’s votes, but he was ready and willing to bring them into his coalition; they were the ones who turned him down. A Netanyahu government that included Ra’am would be the same as the current government and do the same things.

What Israel needs is a true right-wing government, and that means a Likud with a new leader.