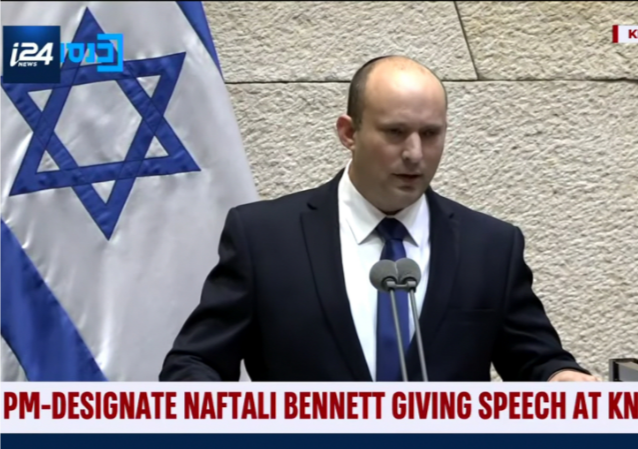 With the swearing in of the new coalition government on Sunday night, Prime Minister Benjamin Netanyahu’s 12-year term at the helm of Israel has come to an end. A broad coalition of eight parties managed to secure the required simple majority of 60 votes in a 120-member parliament, the Knesset, thereby ending a political deadlock which took the country through four elections in two years.

Knesset confirmed Naftali Bennett, the leader of the rightwing Yamina party, as the  country’s 13th prime minister. Under a “rotation” agreement with Yair Lapid, head of the centrist Yesh Atid party, he will serve as the prime minister for two years before handing over the reins to Lapid for the latter half of the term.

The Jerusalem Post reported the formation of the new government:

The Israeli TV channel i24News noted the “razor-thin” majority of the new government which comprises of conflicting political groupings, including the Arab-Islamist Ra’am party. “Israel Parliament votes in Naftali Bennett as prime minister, with 60 lawmakers voting in favor of the ideologically divided alliance and 59 against, with one abstention,” the broadcaster reported.

Netanyahu’s Likud is the single largest party with 30 seats in the current parliament.

Netanyahu offered a handshake to his successor, Bennett, but remained defiant in his final speech in the Knesset, promising to be “back soon.” He also asserted the need to stand up to President Joe Biden’s administration as it moves closer to a nuclear deal with Iran.

“I will fight daily against this terrible, dangerous left-wing government in order to topple it,” Netanyahu said at the conclusion of his lengthy speech in the Knesset plenum. “With God’s help, it will happen a lot earlier than you think it will.”

In comments warning Iran, Hamas and Hezbollah that he is not going anywhere, he declared in English: “We’ll be back soon!” (…)

“The prime minister of Israel needs to be able to say no to the president of the United States on issues that threaten our existence,” Netanyahu went on, noting his own controversial 2015 speech to a joint session of Congress in opposition to the Iran deal — which was arranged without the support of then-president Barack Obama and boycotted by many Democratic members of Congress. “Who will do that now? Prime Minister Yair Lapid?… This government does not want and is not capable of opposing the United States.”

He also reflected on his long public career and recounted some of his political achievements:

I have been under fire as a commander in a special army unit, I nearly lost my life in the Suez Canal. I have worked night and day for our beloved country. Together with my friends in the Likud and partners in the right, we have turned Israel into a local power, not out of weakness, surrendering to outside pressure. We have nurtured our technological and diplomatic and security power – it has brought tremendous achievements for Israel, including the vaccination campaign.

We were the first to get out of the coronavirus. We turned Israel into a free economy – one of the twenty wealthiest in the world. We have narrowed inequality.

We fought with determination to thwart Iran’s attempts to achieve a nuclear weapon.

The outgoing Israeli prime minister leaves behind an impressive diplomatic and political legacy. Under his leadership, Israeli strengthened diplomatic ties with formerly hostile countries across the world, including India.

During U.S. President Donald Trump’s tenure, Israel normalized relations the United Arab Emirates and Bahrain under the Abraham Accords framework. The Trump-brokered accords ushered in a new era of cooperation between Israel and Arab gulf nations. The period also saw the U.S. recognition of Jerusalem as Israel’s capital, and the moving of the American embassy to Jerusalem.

I don’t see how this new government can be stable. Most likely it will fold at the first crisis. Was getting Netanyahu out really worth that risk?

Apparently, to these guys, it was.

Our once great nation is committing suicide, so why not Israel?

Part of what makes Israel strong is frequent changes in government aren’t a problem.

It isn’t stable, and it probably won’t last more than a few months. The point was to get Netanyahu out. Once he’s out of government, the Likud may finally have had enough of him and elect a new leader. And once that happens it can reunite and form a strong right-wing government with a solid majority. Any legislation the current government passes in order to entrench itself can be repealed.

May God have mercy on their souls

irv – our Communists thought it was to get rid of DJT

It’s not sad at all. Netanyahu has no principles, and was bad for Israel. He could have solved the crisis easily by resigning, but he refused to do so because he put his own career ahead of his country. Hopefully the Likud will soon dump him, and the new leader can reunite the right.

“President Joe Biden was among the first to congratulate the newly sworn in Israeli government.”

Well, of course he was.
Why didn’t he delegate the phone call to Kamala? Foreign heads of state are used to dealing with her.

Apparently there has been some change within the administration.

Same with BiBi as with Trump. I don’t think this coalition stuff will make it past summer.

Maybe. But the left also needs to remember that even the opposition parties normally treats Palestinian threats the same as Bibi did.

Interesting that Ra’am abstained from voting for a coalition they are part of, how often does this happen in Parliamentary countries?

They’re not part of the coalition. They’ve agreed to support it from the outside. And they did, apart from one member.

That makes no sense. If that had happened the vote would have been 60-54.

Can you imagine the number of conflicting, tenuous deals made to put together that coalition?

All the deals have been published. They have to be, by law. And yes, they’re a mess, as they always are. This is a ridiculous government, but it seems to be the only short-term solution to the crisis, since a fifth election isn’t likely to produce any better a result than the first four did.

The fact is that a majority of voters want Netanyahu out. If he was really interested in the country’s interests and having a strong right-wing government he could easily have done that by resigning and letting someone else lead the right. Any other leader could have put together a right-wing coalition with at least 66 votes and no leftists or Arabs. But Bibi is all about Bibi and nothing else.

It is disgusting to see the hubris at work in Israel and in the USA. Nemesis will be hard on the communists. I hope they don’t destroy too many good people in their fall.