Inflation Hits a Four-Decade High With an 8.5% Surge in March

Inflation Hits a Four-Decade High With an 8.5% Surge in March

“The all items index continued to accelerate, rising 8.5 percent for the 12 months ending March, the largest 12-month increase since the period ending December 1981.” 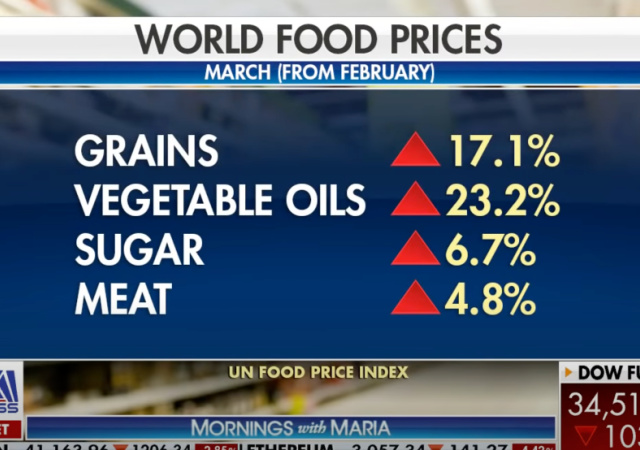 Increases in the indexes for gasoline, shelter, and food were the largest contributors to the seasonally adjusted all items increase. The gasoline index rose 18.3 percent in March and accounted for over half of the all items monthly increase; other energy component indexes also increased. The food index rose 1.0 percent and the food at home index rose 1.5 percent.

The index for all items less food and energy rose 0.3 percent in March following a 0.5-percent increase the prior month. The shelter index was by far the biggest factor in the increase, with a broad set of other indexes also contributing, including those for airline fares, household furnishings and operations, medical care, and motor vehicle insurance. In contrast, the index for used cars and trucks fell 3.8 percent over the month.

March is also the sixth straight month we’ve had inflation over 6%.

The calculations remain high if you take out energy and food, which ate considered volatile. That makes up the core price index and it rose 6.5% in March from last year, up from 6.4% in February. That’s also “the sharpest 12-month rise since August 1982.”

Inflation began in early 2021. This all happened before Russia’s full-scale invasion of Ukraine. It made everything worse.

But this is not Putin’s Price hike. The surge began in early 2021 when Biden came into office.

Has inflation peaked? Hopefully, it is close:

One possible early sign came from the monthly change in the core index. It rose 0.3% in March from the prior month, the slowest pace in six months, driven by a 3.8% decline in used vehicle prices.

Another encouraging sign was that airline fares, hotel prices and other more volatile categories drove much of the price gains for services, while pressure from categories such as housing, which tend to be more persistent, eased, said Blerina Uruci, U.S. economist at T. Rowe Price Group Inc.

However, Ms. Uruci added that said supply-chain constraints continue to push prices up, except for an easing of the costs for used cars.

“The other red flag is Russia’s invasion of Ukraine and the rise of Covid in China,” she said. “Those pose risks that the so-called normalization of supply chains takes longer to materialize.”

I invite you to read Fuzzy’s post on Victory Gardens. It’s time to get planting again. Normally I wouldn’t ever say to cut down on meat, but ground beef is almost $5 a pound, which is almost 15% higher than last March. That sucks.

Buy flour and grains now. The war in Ukraine will cause grain prices to rise higher in price “because of disruption to global wheat and fertilizer production.”

This mess is causing serious problems for families, especially ones with a lot of children. WSJ spoke to Alex Salwisz, who has five children.

He said he has tried to substitute generic food products for name-brand foods as prices shot up—not always successfully. His children—ages 3 to 12—pushed back recently when he sneaked a bag of off-brand marshmallow cereal into a Lucky Charms box. “It didn’t pass,” said Mr. Salwisz, a program manager in information technology who lives in the Denver suburbs. “They had a little revolt, and more than one of them told me I shouldn’t do that again.”

Inflation has eroded their living standard in other ways, Mr. Salwisz said. The children have grumbled when the family crams uncomfortably into the smaller of two vans to save on gas. They have substituted a fast-food meal for the once-a-month sit-down dining experience. He and his wife, Amber Salwisz, are considering scrapping plans for summer camp because of a sharp increase in prices. One partial-day camp increased its price to $800 a week this summer from $500 the prior.

It doesn’t help that the government and states kept their citizens locked up for so long because people are desperate to get out, causing demand in the travel, restaurant, and hospitality sectors.

Higher demand means higher prices. We’re driving to Boston this summer mainly to check out war battlefields, but also because flying is expensive. We’ll stay at cheap hotels on the way up there. We booked an Air BnB so we would have a place to cook to cut down on eating out.

Plus restaurant owners need to make back all the money lost when governments forced them to close.

It’s only April. And it’s pointed straight up. No telling what it will be by Christmas. Good thing Santa brings presents for free.

As long as they don’t cut off the supply of fentanyl, cocaine, etc.

Already have in Sri Lanka and Peru….more to come.

Several Countries are already experience Food Riots. Probably a dozen governments will fall because of them. Sri Lanka is only the first.

Inflation is running at more than 15% and climbing. Use the CPI from 1977 and it’s running over 20%. Food riots will be the least of our worries. Do you know why they changed the CPI in the late 80’s? To prevent the explosion of Social Security increases. Think about the impact that this type of inflation will have on the budget. We are looking at 10 trillion deficits for the next 5-10 years. No way will that be sustainable. Can you say Weimar?

Moe Howard was right, but Larry Fine was in the ball park.

I think with all that inflation and other bad stuff coming, I would like to close my eyes.

That is an astute reference to the different measurement of inflation during the 1970’s and immediately thereafter. The so-called “transitory” inflation that we are experiencing now is far more than a 40 year record if measured on a consistent basis. However, I am not at all sure much higher inflation (“Weimar”) is in the cards. Unless the government keeps printing money like crazy, an increase in the cost of goods and services at perhaps 10 percentage points more than wage increases, rapidly means reduced quantities of goods and services purchased. That is called recession and inflation would then wane. However, IMO the Brandon administration has been so monumentally stupid in everything that printing more money to help struggling people out would be just their style and prevent inflation from declining soon..

1.2 * 12 = 8.5? They don’t even know how to do simple arithmetic. What they’re leaving out are food and energy, for policy purposes, 8.5 might be OK, For the consumer, the number is 14.4, quite a difference. And oh, yes, part, if not all of this is the fault of mamzer who is free-loading at 1600 Pennsylvania Ave, what with his war on the domestic fossil fuel production, and his buy-in to “Modern Monetary Theory,” an excuse to print money ad infinitum.

What are you talking about inflation is based on the Consumer Price Index which includes basic household goods and transportation costs. So yes it does include those things.

Energy and Food inflation are directly related to contracting supplies. Several major categories are inflated due to supply chain issues. A lot of manufacturing prices will be double hit with inflation because critical metals are produced in Russia and refined in China. And these things are in addition to Irresponsible government spending.

Domestic fossil fuel production is not a supply chain issue. The mamzer at 1600 Pennsylvania Ave is directly responsible for the decline in that production in the US.

The Brandon Administration will blame Putin for all of this but all of the advantages the US had to blunt if not ward off this mess were tossed starting in January 2021. We have two wars… the first being from Wuhan and treating it was much like the old days… bleeding the patient and avoiding the causitive agent (China). Now being bled down even more to go (gan)green.. we face a Global War of famine and death … all from the capricious actions of the “Adults in the Room”. Stolen elections have dire consequences.

It is when you think you can drive it with laws and regulations, the way the apocryphal Bible Belt state legislature thought it could redefine pi.

It’s that damn Putin. He is responsible for this mess you got me in Henry.

Well apparently it is a simplistic analysis reduced to greater demand = inflation. What’s caused that demand – a rebounding economy, production problems, and supply chain issues globally hence why inflation is high globally. Those issues in themselves are complex.

No. Inflation is not complex at all. Inflation is always a monetary issue; too many dollars chasing too few goods. The increased price is the result not the cause. Can artificially reduced demand from lock downs result in eventual artificial demand as the market seeks to find equilibrium? Yes, absolutely.

In the US case we have:
1. Artificially suppressed demand imposed by govt
2. $6 trillion dollars created in two years flooding the market from misguided govt policies both monetary and fiscal

Those two errors combine to create inflation; too many dollars chasing too few goods. Exacerbated by low inventory of goods and disrupted supply chains which were caused by lockdown policy errors. Further exacerbated by govt policies to sanction Russia; causing more disruption to global markets for energy, grain, fertilizer, rare earth minerals which has created a cascade effect from these artificially disrupted inputs to final product. A further impact is shipping of Russian oil to new and more distant markets. There are only x many ships that can transport oil so when they have to travel further than normal due to sanctions it’s as if the count dropped, which also impacts prices.

All in all the current economic headwinds are the result of deliberate policy choices by govts around the world. The govt experts created and continue to exacerbate the problems.

Correct, it’s a monetary issue. Total stimulus is about 27% of the GDP and there’s about $1T of Covid relief not yet spent.

Roughly speaking, $5T generated 7% inflation over the 1.5% that existed prior so another $1T generates 8.4% for a combined total of 10% yearly inflation. That means we’ll see this increase last through the summer and into the fall with all else being equal.

What we do know is that there’s spot shortages still in play with Ukraine and the Chinese lockdowns on-going. So with variances reported thus far, 10% +/- 5% for a range of 5-15% inflation through the rest of the year.

Looks like the Salwisz family needs to suffer a little hardship. Kids are whining because they don’t get name-brand Lucky Charms? That they have to cram into a single vehicle?

I’m guessing a lot of people here in the comments have suffered real hardship in their lives, and aren’t exactly sympathetic.

Happened right as the inflation number was “released”.