It appears that childhood health was sacrificed on the altar of “science.” 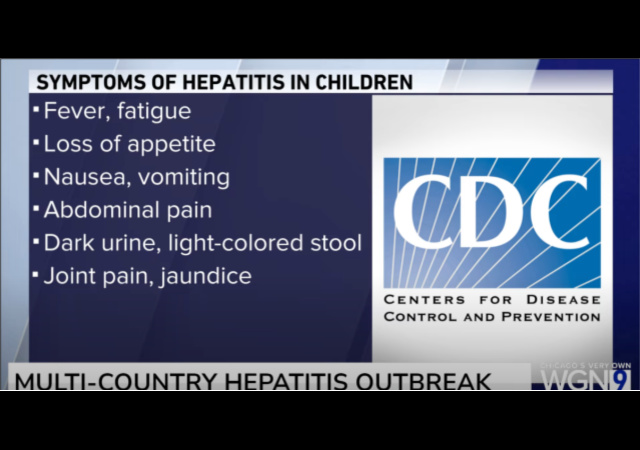 Last week, I reported that the Centers for Disease Control and Prevention and Alabama Public Health officials were investigating a mysterious outbreak of hepatitis among young children in Alabama.

Outbreaks had also been reported in Europe and Israel. The investigators were concerned that the pathogen was an adenovirus known to cause gastrointestinal problems in kids but usually without such severity.

Now one official indicates that the cause may be tied to covid. Not the pathogens, but the lockdowns.

[European Center for Disease Control Director Andrea] Ammon said the investigations so far pointed towards a link to infection with an adenovirus, a family of common viruses that can cause flu-like or gastrointestinal symptoms.

She said a theory that COVID-19 lockdowns may have weakened children’s immunity, because they were less exposed to common pathogens while in isolation, was one of several being considered.

Scientists are also investigating whether the adenovirus involved has mutated, or is acting in tandem with another infection, possibly COVID-19. A toxin could also be responsible, but this is thought less likely due to the geographical spread of the cases reported.

So far, 169 cases have been officially reported. Public health authorities are concerned that this might be the “tip of the iceberg.”

Dr Meera Chand, director of clinical and emerging infections at the UK Health Security Agency, told the European Congress of Clinical Microbiology and Infectious Diseases in Lisbon Monday that younger children were getting infected by the virus as they had not been exposed to it ‘during the formative stages that they’ve gone through during the pandemic’.

Hepatologists today told DailyMail.com they believe the official numbers may be just the ‘tip of the iceberg’ because many parents may brush off the warning signs.

Professor Simon Taylor-Robinson, a hepatologist from Imperial College London, said: ‘I think there are more cases out there.

‘I’d imagine there are more cases than have been reported — but they are likely to be less severe.’

“The Public Health Agency of Canada is aware of reports of severe acute hepatitis of unknown origin in young children in Canada,” the department said in a statement on Tuesday, in response to questions from CBC News.

“These are being investigated further to determine if they are related to cases in the United Kingdom and the United States. As the investigation evolves, we will keep the public updated accordingly.”

The lockdowns were designed to protect grandparents from becoming ill. Not only did the lockdowns fail to stop the spread, but it appears that childhood health was sacrificed on the altar of “science.”

“She said a theory that COVID-19 lockdowns may have weakened children’s immunity, because they were less exposed to common pathogens while in isolation”

But certainly not the vax. No, no, never the vax!

It’s not the vax. Many of the children are under 5, and therefore unvaxxed.

As someone who was blessed with Chicken Pox at 46, I can only wonder how the absence of spreading it the old fashioned way will play out down the road. Maybe everyone will be getting the Shingles shot at some point.

It actually doesn’t work that way. The chickenpox vaccine can prevent you from getting shingles later in life because you don’t have the virus in your body the way that people such as you and I walk around with.

Of course, the vaccine can fail and you can still get shingles, but you are far more likely to get shingles from the latent reactivation of varicella already in your body.

I’m in the process of doing just that. Because it’s an actual vaccine that actually works. I had to nurse my father through shingles, when he was younger than I am now, and it clearly was not a cakewalk for him. I’d like to avoid it.

And healthguyfsu is right — shingles are often a “rematch” of the very chicken pox virus you caught (my generation had no vaccine) when you were younger.

Don’t tell my online folowers, they all think I’m a white supremacist Nazi racist anti-vaxxer who wants to kill their grandma, and I wouldn’t want to take their fun away.

I believe this true. Death by Faucicide,

Put the kids in a bubble; no contact, mask mandate, no playing outside, minimal human interaction or exposure to very common and usually mild pathogens, virus, bacteria for a couple of years. Yea science!

Oops, the kids didn’t build up natural Lynch acquired immunity through normal previous exposure to a great many things and are now experiencing more issues when contact is made with more severe strains. Way to go public health officials, your foolishly myopic Covid policies are the gift that will keep on giving for years to come.

I’m so old (actually, anybody 21 or more is so old) that I remember when “public health officials” were warning all of us not to use antibacterial handwash routinely because it fostered the development of more virulent pathogens. Their own COVID policies contradict this — instead of making the pathogens more virulent, we make ourselves more susceptible to the virulence of the garden-variety ones.