Statistics show that 2022 could be just as deadly for police officers. 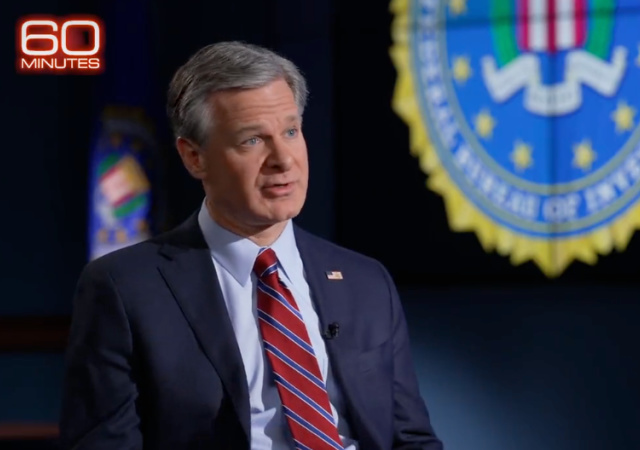 FBI Director Christopher Wray’s interview with 60 Minutes is lying underneath the rest of the news despite bringing up an important issue.

“Violence against law enforcement in this country is one of the biggest phenomena that I think doesn’t get enough attention,” Wray told Scott Pelley. “Last year, officers were being killed at a rate of almost one every five days.”

Violent crime is up in the U.S., and in 2021, there was a 59% increase in murders of police officers. FBI Director Wray says “an alarming percentage” of the officers killed were killed in ambushes. “Wearing the badge shouldn’t make you a target.” https://t.co/G4EN7xhOpQ pic.twitter.com/akb4AQwbvP

Some of the murders happen during violent crimes. But the majority are killed for being police officers:

Christopher Wray: Some of it is tied to the violent crime problem as a whole. But one of the phenomena that we saw in the last year is that an alarming percentage of the 73 law enforcement officers killed in the line of duty last year were killed through things like being ambushed or shot while out on patrol.

Scott Pelley: They were killed because they were police officers.

Pelley seemed to try to justify the people’s feelings toward the police, but Wray didn’t take the bait:

Scott Pelley: But Mr. Director, some people are in their homes living in fear of the police coming through the door with a no-knock warrant. And I wonder how the FBI can contribute to the reduction of police brutality, which also occurs in our country?

Christopher Wray: Well, we take very seriously our responsibility to both protect the American people and uphold the Constitution. And that includes where it happens, going after police misconduct if it violates federal criminal law.

Statistics revealed that 2021 was the deadliest year for police officers since 1995, excluding September 11.

The data also showed an increase in “unprovoked” attacks. The FBI defines unprovoked as “not prompted by official contact at the time of the incident.” It describes ambush as an “entrapment and premeditated attack.”

Out of the intentional killings, the FBI classified 25 of them as unprovoked through December 27.

The FBI’s unprovoked stat usually comes in with a single-digit number.

The 2022 numbers are just as disturbing, and we’re only at the end of April. The Officer Down Memorial Page lists fallen police officers who pass by natural, accident, or intentional causes on- or off-duty.

The page lists 17 officers killed by intentional gunfire in 2022.

Useless messenger of the obvious

‘Wearing the Badge Shouldn’t Make You a Target’

Wow, that’s deep. Did he get that off of Kamala?

“But Mr. Director, some people are in their homes living in fear of the police coming through the door with a no-knock warrant…”

I dunno. I bet quite a few people have realized they can be SWATted if they make the wrong comment online or even just have words in a video game.

Or that golden oldie of excuses, “we hit the wrong address “. No apologies, unless suits are filed damage is not repaired and dogs are not replaced.

It’s an odd thing, isn’t it? His career at everything else suggests otherwise.

Then again, he picked Kayleigh McEnany. Even Mike Pence was a good pick – until the very end.

Photoshop is not an evidence collection tool.

“An FBI supervisory special agent whose name is redacted signed their name on the initial FISA application, saying: “I declare under penalty of perjury that the foregoing information regarding Carter W. Page is true and correct.”

Now, now…! Trump was perfect. At least he was if you listen to all of his groupies. Full disclosure: I voted for the man twice. I think he was good for the country but at the same time I think the man is terribly naïve in many ways. I have no idea who could replace them at this point but, somebody must. Maybe somebody who will take his guidance, but if the rate times with no how to say no.

Let the downticks begin. I have my hat on.

Wray is a scumbag. Remember when his fellow scumbag FBI agents were kneeling for their BLM pals 2 years ago? The FBI did jack shit about nationwide BLM rioting.

“Christopher Wray: Right. Wearing the badge shouldn’t make you a target.”
Testi-lying behind a badge should, though. And you did a lot of it.

We should volunteer Wray to be in place of any officer who might lose his or her life.

His Marxists friends at BLM brought it on, he wanted it just maybe didn’t plan it out to well.

Taterhead Stelter may have finally met someone with less integrity and erudition in Christopher Wray.

Wray and Wallace could join in with Dan Rather for a podcast show, The Dan, Chris and Chrissy Hissy Hour.

Wray rightly describes the problem, yet, his manifestly corrupt and compromised agency — acting as a de facto state police arm of the Dumb-o-crat Party — has treated the two groups who are most brazenly hostile and violent towards law enforcement officers — goose-stepping, “Black Lives Matter” and “Anti-fa” terrorists/insurrectionists/thugs, with the utmost leniency and kid-gloves treatment, following the Dumb-o-crat Party’s lead.

Wray’s posturing and rhetoric are utterly worthless, if not matched by action against the Dumb-o-crat Party’s anti-law enforcement terrorists. I won’t be holding my breath.

No sale on Wray’s attempt to rehabilitate the image of the FBI. He hasn’t gone after members of his own agency for their many misdeeds during his tenure as Director. He seems more interested in protecting the image of the FBI via PR stunts than rooting out and prosecuting bad actors in his agency.

The FBI is just not going to be rehabilitated under this man’s leadership. What did he have to do with the Whitmer kidnapping entrapment scheme? With the J6 incident? With the on-going witch hunt for anyone who was at or near the Capitol on J6? With trying to present a still-boxed Lego set of the Capitol Building as a nefarious “terrorist” “blueprint”? With launching a pre-dawn attack on that Alaska couple who never even entered the Capitol Building? The FBI is completely lost and has no credibility, no trust, no honor, no nothing.

I truly don’t think that our so called betters understand just how much damage they have done to themselves and the institutions they control. On general principle many people wouldn’t trust the CDC blathering on about infectious disease if they were bleeding out from Ebola. The same is true for the FBI.

You’re right, Chief. I hate to see it, to be honest, but it’s where we are.

As veterans, Medicare recipients, business owners, voters, school parents, car owners, taxpayers, or even just postal occupants, we are all acutely aware of how much the government sucks at the services that touch us personally. Yet, we are content to unconsciously assume that other aspects of the government that do not (yet) touch us operate at peak, nay, heroic effectiveness. when they do reach out and touch us, we are unreasonably amazed that our golem’s feet are made of clay.

It’s all Gell-Mann Amnesia. And we are waking up from it for a very brief period. People never wake up very long, much less permanently.

Some sure not all, and don’t underestimate just how important a return to a ‘neutral’ Twitter will be. The d/prog and media elites aren’t faking their panic and anger. They know that allowing average people access to a national /International platform to express alternative opinions is detrimental to their ability to manage and control the message.

Wray is not ‘leader’ of the FBI any more than Biden is ‘president’. Like Biden, Wray is a puppet.

Wray is just the visible symptom of the rot that lies beneath the surface. Almost every government agency, department is infected. Years of malfeasance going unpunished has led us to where we are today. I have no faith that the FBI, CIA, Secret Service, etc, can actually do the jobs that their charters call on them to do.

There is a substantial minority that see law enforcement as an enemy. Perhaps if they would stop committing crimes out of proportion to their population, the risk of arrest could lessen. When answering questions about crimes is stigmatized, something is wrong. Respect is earned, not just granted.

TELL THAT to useless kenyan, ObOzO DE zerO & his minions of trash, JUST LIKE HIM ! THAT is those whom worship the POS!!

I think while the police actually need support against a leftist agenda we should work on a de-(fill in a certain word that starts with an F) program. Police both here and in Canada and Australia have been extremely biased against conservatives (just watch this video https://www.youtube.com/watch?v=f18ZXQTS06g&t=8s )

One place to start is the FBI does not get a single cent while Christopher Wray remains there.

Wearing the badge shouldn’t make you a target.
Sorry, but suck it up, buttercup. If there weren’t bad guys we wouldn’t need police at all. But, since we have bad guys AND we insist on not just anyone going out and delivering ‘justice’, we have police. Some of the bad guys are going to target you because you’re a cop. That’s the job.

Having corrected that, yes, we have a real problem with a significant segment of our population being badder guys than we used to accept. Because there are no appropriate consequences for their bad behavior. Put a few of these folks on the gallows and the behavior would mostly end.

The statistics in the article weren’t clear to me. Aren’t there more unprovoked attacks on New York subway riders than on police officers? Definitely more innocents shot in Chicago than police officers in the US. Wray is perpetuating “us versus them”.