FBI: 2021 had the Most Intentional Killings of Law Enforcement Officers Since 1995, Excluding 9/11

FBI: 2021 had the Most Intentional Killings of Law Enforcement Officers Since 1995, Excluding 9/11 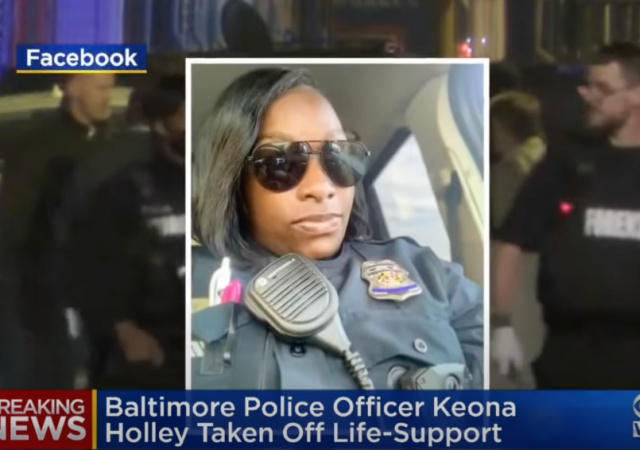 CNN buried the lede in its article about intentional killings of law enforcement. It claimed the 73 officers who “died in felonious killings in the line of duty in 2021” is the most in 20 years.

However! It is the “highest total recorded by the agency since 1995, excluding the 9/11 attacks.” 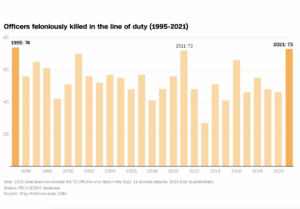 The homicides all point to the death of George Floyd in May 2020. The left used his death to go after law enforcement. From CNN:

Gunfire has consistently been the leading cause of felonious officer deaths each year — and 2021 was no different. The FBI has not released its full end-of-year breakdown but reported that 55 officers were killed by gunfire in 2021 through the end of November, up from 39 in the same time frame in both 2020 and 2019.

Homicides rose in 2020, a year marked by a global pandemic and the murder of George Floyd by a Minneapolis police officer and subsequent unrest. In its 2020 UCR report, the FBI noted that an increasing number of homicides were committed with a gun. For many cities, the elevated rates of homicide continued into 2021.

The data also showed an increase in “unprovoked” attacks. The FBI defines unprovoked as “not prompted by official contact at the time of the incident.” It defines ambush as an “entrapment and premeditated attack.”

Out of the intentional killings, the FBI classified 25 of them as unprovoked through December 27.

The FBI’s unprovoked stat usually comes in with a single-digit number.

In late 2021, two Bradley, Illinois, police officers were shot while responding to a call about dogs barking in a hotel parking lot — Sgt. Marlene R. Rittmanic died from her injuries and Officer Tyler J. Bailey was hospitalized in critical condition.

In Baltimore, Officer Keona Holley died last month after being shot while sitting in her patrol car. Two suspects were charged with attempted murder in the shooting of Holley after they confessed to the crime, but their motive remains unclear, said Baltimore Police Commissioner Michael Harrison.

I said “possible” because CNN stated: “It’s not yet clear if the Bradley, Illinois, shooting, or Holley’s death would be classified as an unprovoked attack or an ambush by the FBI.”

The data showed that two-thirds of the “40 most populous cities saw more homicides last year than in 2020.” Ten cities had more homicides in 2020 than any other year.

I wrote about Chicago because it’s my home, but when you think of crime and homicide, the Windy City comes to mind. You search “Chicago Homicide” on the website you can see that Chicago’s homicide numbers grow each year.

CNN did not disclose that Democrats run quite a few of the cities. Mike blogged about the stat last month. A lot of them have district attorneys backed by George Soros. 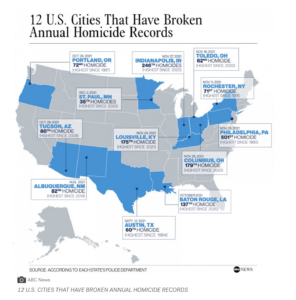 How is Chicago not on this list? Their numbers have gone crazy.

Probably because the cops don’t go to the bad parts of town.

With a mayor and whatever they call their district attorney like they gave in Chicago, I’m surprised they do anything.

I read cwbchicago.com regularly. It covers mostly one area of Chicago, not all of it. What axtragic place it is. It’s just plain sad.

Axtragic? You mean extra tragic or ass tragic. Or a combination thereof.

Are you flirting with me again?

My Mama said not to flirt with bears.

The map is for cities setting new records. Believe it or not, Chicago needs about 200 more homicides than 2021 to do that.

It’s their fault, because they peaked way early.

From what I’ve read, they are slightly ahead of pace from last year. I have faith they can do it!

“…the murder of George Floyd by a Minneapolis police officer and subsequent unrest.”

Floyd died from a fentanyl overdose. Officer Chauvin was railroaded.

Only a fool would believe that there isn’t a direct correlation between the vile Dhimmi-crats’ contrived racial victimhood-posturing, and, their increasingly unhinged, dishonest and despicable vilification of police officers — rhetoric dating back decades, but, heightened in intensity since narcissist-incompetent, Obama’s, tenure — and, an increase in violence against law enforcement officers. The causation is obvious. This is 100% on the vile Dhimmi-crats.

So anyone want to guess how many more blacks were murdered in 2021 vs 2020. BLM and defund the po po wanted change, and I guess they got it.

Did her black life matter?