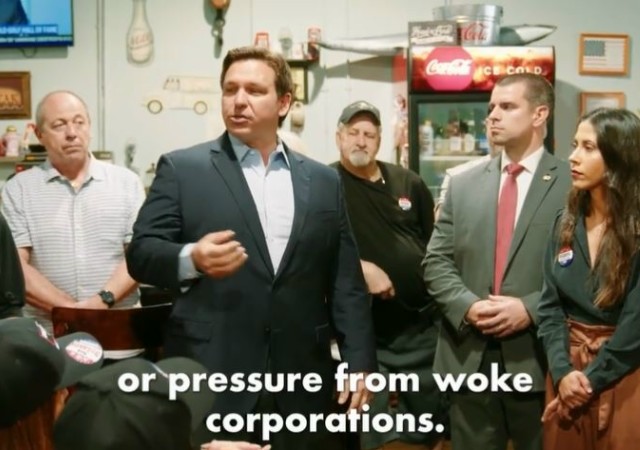 For some reason, Disney decided to side with radical leftists on the teaching of sex (as in explicit sexual acts), gender, and sexuality in kindergarten through third grade. Disney was very upset that Florida governor Ron DeSantis signed a law banning the age-inappropriate teaching—in the public school classroom—of things like gay oral sex to five- to nine-year-olds.

But Disney decided this is the hill on which they want to take a stand.  It didn’t go well.  Given that the majority of Americans, including a majority of Florida’s Democrat voters, do not believe these things should be taught to K-3rd graders, Florida’s parental rights law is a curious hill for Disney, a company that depends on parents bringing their small children to their theme parks, watching their movies, and buying their merchandise.

When I first saw reports that Disney had ditched its communications guru, I thought it a good sign, maybe Disney finally understands the issue and that taking a public stand in favor of sexualizing tiny children in the public school classroom was a bad idea.  But no.

The Walt Disney Company is parting ways with Geoff Morrell, its head of corporate affairs, after a series of public relations debacles.

Morrell, ousted after less than four months on the job, joined Disney in January from a post as the executive vice president of communications and advocacy at oil and gas company BP. But the transition was bumpy, coinciding with a bruising period in which Disney CEO Bob Chapek was faulted for his stumbling response to Florida’s “Don’t Say Gay” laws. Disney said Morell is “leaving the company to pursue other opportunities.”

His role will be split in half. Kristina Schake will lead The Walt Disney Company’s communications efforts, serving as our executive vice president of global communications reporting directly to Chapek. Schake joined Disney in April, and was previously deputy communications director for Hillary Clinton’s 2016 presidential campaign. She also served in the Obama and Biden administrations.

The Washington Free Beacon has more on Schake:

Schake is perhaps best known for encouraging Michelle Obama to make an “undercover” shopping trip to a Target in Alexandria, Va., where an Associated Press photographer just happened to be waiting with a camera. She is credited with helping the former first lady establish her brand as an “accessible everywoman.”

Schake’s efforts to do the same for Hillary Clinton in 2016 were not as successful, for obvious reasons. In her role as deputy communications director, Schake was tasked with showcasing the failed candidate’s “self-effacing, warm and funny side,” according to the New York Times.

. . . . Schake and other members of the Clinton campaign were reportedly urged to stop associating with Weinstein in light of the producer’s longstanding reputation as a sexual predator. Celebrity activist Lena Dunham, for example, said she warned Schake in 2016 that it was “a really bad idea for [Weinstein] to host fundraisers and be involved [with the campaign] because it’s an open secret in Hollywood that he has a problem with sexual assault.”

Dunham said Schake had been surprised by the warning and promised to raise the issue with Clinton’s campaign manager, Robby Mook. Regardless of whether the concerns about Weinstein were discussed among senior members of the campaign, no actions appear to have been taken in response.

This should go well.

I’ve said for a long time. A number of corporations are in the midst of a slow suicide.

In the name of ‘diversity’ and ‘inclusion’, they hired insane political ideologues because of their appearance and politics, instead of their ability to do their jobs and make the company money.

And they are in control. The ONLY way to stop it would be to openly start firing people pushing identity politics at the expense of the company’s financial interests.

But there is simply no appetite for it. The rot goes too deep. The activists are in control, and they couldn’t be removed even if a lot of these companies even wanted to try, which they still don’t.

We’re watching the slow-motion suicide of a number of very large corporations, Disney is only one of them.

Sorry. Meant to upvote you!

Here in Florida it really does not matter who runs Disney’s communications. What is now at hand is how much does Disney want to lose money for their stockholders. DeSantis is not going to back down, the RINOs in the leadership are actually on board with the governor, parents here will go to another attraction, and voters, come November will give the middle finger to Disney and their grooming supports by re-electing DeSantis by a massive margin, help to expand the majorities in the legislature and make it much more difficult for the Florida Democrat Party be competitive.

I agree with everything you said. IMO the Board of Directors of a public company dependent on public purchases for its survival should fire any executive antagonizing a significant percentage of its customer base. That said, I have read that cancelling that special district will not go well for DeSantis because of issues about that $1 billion on bonds outstanding.

Incorrect. What many in the media neglect to mention is that the state constitution, which was passed by the voters in 1968 and Disney, along with five other “Independent Districts” have not adhered to it. Here is an explanation:

Is this legal? Yes, probably. The 1968 Florida Constitution holds that:

The Florida Constitution is the standard and not an obscure law. Also, the governor has called for a second special session for May. It is probable that DeSantis and the Florida Legislature are not done with spanking Disney.

He’s already addressed that it’s some screen by Disney and the left.
Disney will be paying it!

Did Mickey fall, or was he pushed?
My tinfoil hat whispers to me that Disneycorp did not “choose” this Clinton Crime Family alumna. This is the Swamp itself not letting a crisis go to waste.

You would be wrong, Disney is wayyy on the left and has been for decades

But the veil has finally slipped

I’ve been in CA for over 30 years and was learning soon after I arrived from many knowledgeable people about the creepy culture that was taking over Disney. The Velvet Mafia, the man-boy culture…. creepy, creepy, creepy. Like all of these “conspiracy theories’ over the years, they turned out to not only be true but even worse than we were saying.

I can’t help but think that the K-3 factor is a head fake. What happens when we win the “NOT IN K-3” argument – does that mean 4-12 is OK for teaching that perverted crap?

We ought to be fighting/resisting that crap for any age under 18. They’re legally minors and where sex is an issue of morality and holiness (for people of faith), the school has NO business teaching any thing beyond biology and natural reproduction.

I just have this gut-wrenching feeling that K-3 is a kind of red-herring the left has thrown into this argument, that will leave them with a victory for 4-12.

Though you make valid points you are incorrect in your 4-12 “victory” argument. It is now illegal to teach any sexually inappropriate subjects to ALL students in the state of Florida. Here, ALL parents are now allowed to see every textbook and education material online and in person. Any parent, regardless of the age of their child can object and even sue the District for what is deemed “inappropriate”. This includes not only sexually offensive material but CRT teachings. Plus, the Florida Department of Education is a closer watch dog of education material being used in the classroom. The real head fake was the K-3 when in all act it will be K-12.

It’s salami slicing, same way the left perfected it. Note that in a midwest state recently, the right went for the whole salami (K-8 or K-12, don’t remember which) and the bill crashed and burned. But any Democrat legislator who opposes a K-3 bill is easily tagged as a groomer.

The Parental Rights Bill that bothered Disney so much was originally K-6. The House sponsor amended it to K-3. What gets lost in this discussion is last year the legislature passed a Parental Rights Bill and thus year they expanded parental rights with this bill along with other bills. For instance, the WOKE bill incorporates schools and the businesses by saying that it is now illegal to teach one race it is evil and that another race oppressed and it is forbidden here now to do this in “diversity” teachings in the business place and of course in schools. In essence, the Florida Republican establishment along with DeSantis knew to do this piecemeal and get the result that they wanted.

That is how the left always win, by picking the battles. The right always ends up compromising and the “center” moves left with the Republicans consolidating the leftward lunges once voters revolt and put the Republicans back in charge. It won’t be long before the GOP becomes the lesbian-gay party fighting the Dem trans-pedo party. It’s a great thing that the Mama Bears and many liberals are getting red-pilled. There just aren’t enough Republicans fighting with us. Heck, we have two superstars scoring big and we still have idiots trying to get us to pick one over the other when we need them both. There is just too much stupid in the Stupid Party. But right now, we are on a roll.

The guy he replaced was a Bush/Obama alumni.

I think that FL Child Protective Services should remove Mickey, Minnie and the other minors found at Disney, and find good homes for them.

Why in the world did DeSantis go to WH Correspondence Dinner

It makes him too conniving for the 2024 nomination… and I love the guy.

Another way to view his attendance is he went into the heart of the opposition as a sitting Gov leading the polls for his re-election. IOW ‘ I’m still here despite the best efforts of the legacy corporate media to take me out, about to be reelected and continue crushing your asses.’

Doubling down on “woke” narcissism/totalitarianism/stupid. Such indefensible arrogance and grandstanding from Disney management, contrary to shareholder interests.

This is what happens when Dumb-o-crat narcissism and totalitarianism infect corporate management, like a cancer — you get C-suite executives and lackeys who believe that the corporation should act akin to a partisan advocacy group/non-profit, in slavish service to Leftist ideology, necessarily betraying the corporate mission and shareholders.

I should add that the corporate attitude I describe, above, already represents de facto management posture at 99.99% of Silicon Valley tech companies, including all the large-cap names (e.g., Alphabet, Apple, Amazon, Facebook, Salesforce, Microsoft, etc.), with the possible exception of Palantir and Oracle. And, now, this same Leftist ethos is becoming de rigeur at many banks and asset managers, e.g., Blackrock, Bank of America, Goldman Sachs, State Street, etc. It’s a cancer.

I predict the next step is States using the regulatory authority of their own Securities Commissions to review whether these companies actions are meeting their fiduciary duty. Stakeholder BS runs counter to the interests of Shareholders.

When they rebrand from the hopelessly destroyed Disney brand, they can rename Disneyland to Mickey Mao’s Theme Park.

Disney is deliberately turning itself into the New Coke of Windows Vista.