“Kamala looks like a UPS employee — what can brown do for you? Nothing good, apparently.” 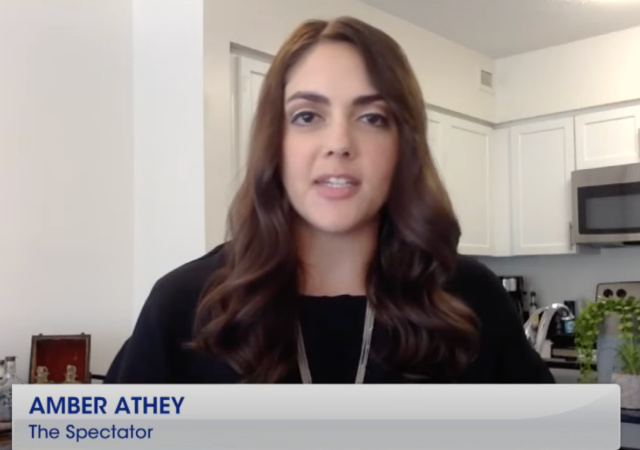 During the 2022 SOTU, Kamala Harris wore a brown suit that matched her chair. Conservative radio host Amber Athey made a mild joke about it on Twitter and was fired after activists convinced her employer the remark was racist.

Athey wrote about it at Spectator:

I was fired for a joke about Kamala Harris’s outfit

I am no stranger to cancel culture — or what we know more commonly (and accurately, in my opinion) as censorship.

When I was one of a handful of conservatives on a liberal college campus, my peers on the left reported me to our resident advisor for “creating an unsafe environment” and demanded the administration step in to cancel speaker events I hosted through the College Republicans. They later would ask the university to revoke my degree. Throughout my six years as a political journalist and commentator, left-wing activists have tried every trick in the book to drive me out of the industry: digging up old tweets, demeaning my appearance and harassing my employers.

None of it has worked… until now.

About a month ago today, I posted a tweet during the State of the Union address poking fun at Vice President Kamala Harris’s outfit. Harris wore a chocolate brown business suit that was panned on social media — some users compared her to a Hershey’s chocolate bar, while others wondered why she wore the same color as her chair. I went for a UPS joke, featuring the company’s now retired slogan:

“Kamala looks like a UPS employee — what can brown do for you? Nothing good, apparently.”

No one had a problem with the tweet until a few days later, when I spoke critically of protests in favor of “trans kids” at the University of North Texas. A group of maniacal left-wing activists who want to chemically castrate children in the name of “gender affirmation” came after me. All of a sudden, the Kamala tweet was being re-framed as racist and dozens of Twitter accounts were bragging about contacting my employers about my “bigotry.”

Kamala looks like a UPS employee — what can brown do for you? Nothing good, apparently.

This isn’t in Amber, it is on her employers.
Fight fire with fire, go after the groups taking you down. Pull up their tweets and reframe them the way they did yours.

She was fired from WMAL’s morning “O’Connor & Company” show. The Spectator simply laughed and deleted critical e-mails. WMAL broadcasts in the DC area.

A UPS joke. Wow, what a shock jock, that Amber, eh?

And Washington DC. Home to some of the most offensive radio talent ever (and that’s only talking about the white guys).

After the Air Florida disaster, Howard Stern lost his show there when he phoned the airline live to “book a one-way ticket from National Airport to the 14th Street Bridge.” (Stern frequently used the full n-word on his show back in those days.)

His slot was taken over by Doug “The Greaseman” Tracht, who has been fired more times than Dagwood, and that’s just in the DC market alone.

Doug’s first offense was to quip, during the national push for an MLK holiday, “kill four more and we can take a whole week off.”

Then, working at another station, the day after the conviction of the dragging murderer of James Byrd Jr., he stopped a Lauryn Hill rap track to comment, “No wonder people drag ’em behind trucks.”

But a joke about a bad brown outfit. Burn the witch.

Hopefully, someday the push to make every comment about race will end and we can allow humor back into our lives. Of course, the always sour faced leftists will likely not let that happen. They like being miserable.

I was actually going to subscribe to “The Spectator (US edition). It’s a decent read and Ms. Athey was a great contributor. I’m actually surprised that The Spectator wouldn’t back her.

Let’s be clear: Anything can be offensive to anyone with “thin skin.” If Ms. Athey had dropped the “N-word,” that would be indefensible. But, using a UPS slogan? That would be a tangential racial “attack” at best, and not even a good one.

BTW, I’m a former UPS employee and I’m not offended that a slogan my company paid for was used on a politician unworthy of “the Uniform.”