Border Patrol Apprehended 23 People on the Terror Watchlist in 2021

Border Patrol Apprehended 23 People on the Terror Watchlist in 2021 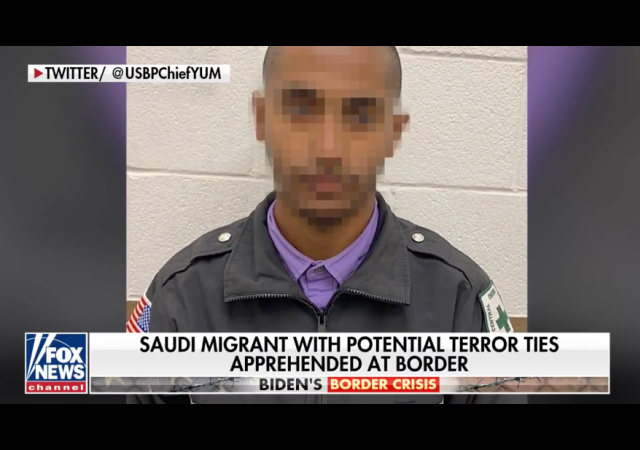 Fox News learned the border patrol arrested 23 people on the terror list along the southern border in 2021:

Between Jan. 20 and Dec. 27, 2021, there were 23 encounters with individuals whose names matched on the Terrorist Screening Database (TSDB).

Four were in the Rio Grande Valley Sector, 4 in Del Rio Sector, 3 in El Paso Sector, 2 in Tucson Sector, 2 in Yuma Sector, 4 in El Centro Sector and 4 in San Diego Sector. The information was provided to Fox News in response to a Freedom of Information Act (FOIA) request submitted in December.

The Terrorist Screening Database (TSDB) contains information about the identities of those who are known or “reasonably suspected” of being involved in terrorist activities. Republicans lawmakers have repeatedly called for the number of those encountered at the border to be made public by the administration.

EXCLUSIVE: There were at least 23 people caught at the U.S. Southern border in 2021 who were flagged on the Terrorist Screening Database (TSDB) of known or suspected terrorists, according to a CBP record I obtained through a Freedom of Information Act (FOIA) request. @FoxNews pic.twitter.com/59br5p7AV2

Biden ousted Rodney Scott as border patrol chief in the spring of 2021. Scott served over 30 years in that role.

In October 2021, Scott told Fox News that terrorists are trying to cross the border:

“We have terrorist threats we can’t get into in this type of a forum but they are real,” Scott said in a preview released on “Special Report” Monday.

“They exist, and they want to come across that border. Statistically, it always includes rapists, murderers, potential terrorists every single year if you look at CBP’s statistics publicly available. Those all exist in who we actually catch,” he added. “To think there is not just as bad or worse people in those getting away would be naive.”

After Scott’s ouster, some in the media noticed the border patrol quietly deleting announcements about terrorists apprehended at the border.

The border patrol released a press release in April 2021 detailing the arrest of two men on the FBI’s Terrorism Watch List and No-Fly Zone.

The border patrol deleted the press release because it “was not properly reviewed and contained certain disclosure and policy information related to national security that required CBP to remove it from our website.”

Then in December, Yuma Sector Chief Patrol Agent Chris Clem deleted a tweet after agents “apprehended a potential terrorist who illegally entered the U.S. from Mexico.”

Customs and Border Patrol (CBP) said Clem deleted the tweet since it had “law enforcement sensitive information” while violating protocols.

The pedophile-in-chief and all of the retards that voted for him approve of this message. After all, communists have one talent and that’s causing large amounts of people to die en masse.

As I recall Psaki said, 23 is no big deal compared with the total number entering. Also, we know we can count on the FBI to get info on any taking flying lessons and not interested in landing. Finally, didn’t Homeland Security say white supremacists (and not Brandon) are our biggest national security threat. /s

Perhaps there’s more to those bus rides to DC than meets the eye?

Abbot knows to be true, that which everyone else denies.

Absolutely priceless to those of us with gallows humor.

Coming: the terrorists being inserted into our country will, of course, commit terror. And the swamp will use that as an excuse for opression.

McConnell and McCarthy will remain in charge of the GOP minority in Congress. But then, that’s our fault.

See, THESE are the people Abbot needs to dedicate a plane to.
Put them all on the same one, would be awesome!
Send them to Wilmington or DC, I’m undecided.
Choose one now, send the next couple dozen to the other.

But would they consent to go? He can’t force anyone. Every person he’s putting on those buses is a volunteer. People intent on mischief wouldn’t go, unless their intended target is DC, in which case a free ticket there would be welcome.

You can certainly force people that are arrestable, by arresting them.

Given that two get away for every apprehension, that would mean 46 terrorists got away. But wait:
– That average is skewed by those voluntarily crossing & awaiting apprehension so the 46 is likely much higher… BUT WAIT!
– Foreign operatives & terrorists would likely have training & skills to evade capture AND the will & reasons to do so. The 46 is likely 460.
Well done Brandon!