A Political Fable for Our Time 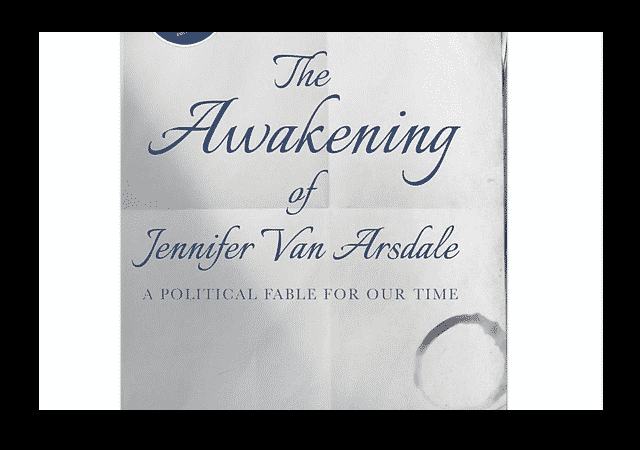 However, once in a while, a fun piece of fiction hits my inbox, as is the case with George C. Leef’s The Awakening of Jennifer Van Arsdale: A Political Fable for Our Time. However, I am struggling to classify it, as the book is part drama, part horror, and a great deal of fantasy.

This is the first fiction penned by Leef, who is the director of editorial content at the James G. Martin Center for Academic Renewal.

Leef explores the “profound cognitive dissonance” achieved when a well-meaning super-progressive journalist discovers the stark contrast between the policy goals of her political idol (the “First Woman President,” as defined per the usual biological standards) and a minority who suffers under those policies.

Jennifer Van Arsdale is the reporter who President Patricia Farnsworth invites to write the official biography. Farnsworth remembered how one of Arsdale’s articles helped destroy her first opponent’s campaign. Arsdale called it, “my own ‘October Surprise’.”

The horror part of the book comes as both Arsdale and Farnsworth discuss how they engage in destructive and legally questionable actions for the “the greater good” as defined by their elite sensibilities and moral superiority. It is clear during the interview that Farnsworth is radically remaking America and ignoring constitutional barriers to do so.

The fantasy kicks in after the glowing interview. Arsdale is attacked on the streets of Laguna Beach, California, only to be saved by a man that clearly deviates from the progressive narrative. Her hero, Will, is African-American and retired U.S. Navy veteran patrolling the area, which lacks a police presence due to defunding.

Here is a sample passage from the book covering the post-attack conversation:

Jen had never heard anyone of any race say that reparations weren’t at least a good concept. But here was a black veteran who said it was a terrible idea.

“Let me ask you this, Will—haven’t you experienced racism in your life?”

Will refilled his coffee cup.

“Racism? Almost never. When I was in the Navy, there were a couple of jerks who seemed to look at me as if I were inferior because of my skin color. For months, I just ignored them. But one day, an officer overheard their stupid taunts. He was a white guy who must have been about six foot six. He glowers at the pair of them and says, ‘Just what the hell is wrong with you morons? If I hear any more crap like that I’ll make sure you get the worst duty on ship.’ Then he turned to me and said, ‘Sorry about that, Collier. Let me know if they ever bother you again.’ They didn’t.

“I haven’t felt racism since then. The Navy was color blind. All that mattered was doing your job right. Funny thing though—I heard recently that the top brass has started including ridiculous books on what’s called ‘antiracism’ on its Professional Reading Program. I hope the officers have the good sense to pay no attention to them.

“Real racism has mostly disappeared, so the people who are invested in racial antagonism have to make up new definitions and imaginary problems to keep people stirred up. Politicians often gain by making mountains out of molehills. Reparations is just one more example.”

And while it would be nice to think the characters could have such a civil conversation of their differences, a glance at how most journalists talk to non-elites indicates this portion of The Awakening is very much fantasy.

Will Arsdale continue to write her book as she first envisioned? Can she and Will remain friends? Order the book to find out.

This book is a compact version of Ayn Rand’s famous Atlas Shrugged blended with topics ripped from today’s headlines. Leef’s book is a solid read and something to take to the beach if you want some fiction with a side of politics.

I give the book 5 stars out of 5 (I like both horror and fantasy, though I hope Leef’s next book features elves and/or vampires), and recommend adding it to the upcoming summer vacation reading list. Given the upcoming election in November, the timing is excellent.

“…the book is part drama, part horror, and a great deal of fantasy.”

Sounds like the book I read on presidential history:

1. PART DRAMA: The polls close, Trump is ahead. but workers counting the ballots go home at midnight and in the Morning Joe Biden is ahead.

2. PART HORROR: A man with obvious dementia is sworn in.

3. A GREAT DEAL OF FANTASY: Everybody now pretends that Joe Biden is president.

I doubt your synopsis would sell. Would readers believe voters could be that gullible?

“Real racism has mostly disappeared, so the people who are invested in racial antagonism have to make up new definitions and imaginary problems to keep people stirred up.”

Well, that’s old news. The new news is that due to all this stirring up by the race hustlers, real racism is on the upswing again. Sow, reap.