This information is beyond shady. 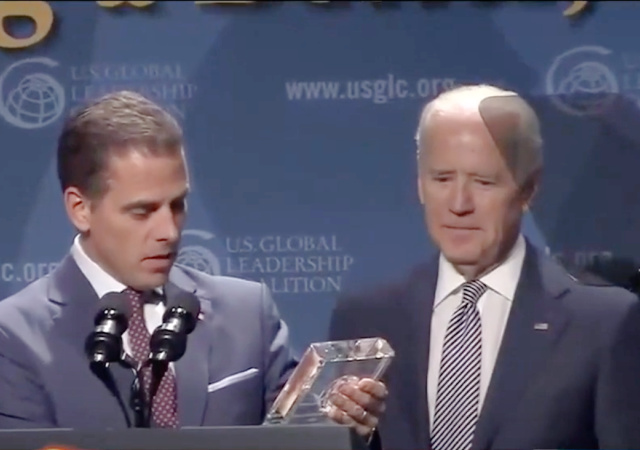 Two bombshells came out on Tuesday: President Joe Biden agreed to pay Hunter’s legal fees and Joe has $5.2 million of unexplained income in his financial records. 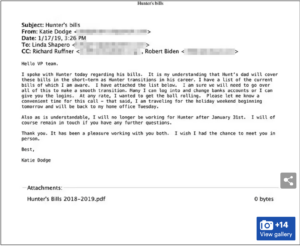 The spreadsheet shows Hunter Biden’s debts included more than $130,000 in legal fees due “ASAP” to the law firm of Faegre Baker Daniels, with $28,382 owed for “BHR Restructuring.”

That appears to be a reference to the Chinese company Bohai Harvest RST (Shanghai) Equity Investment Fund Management, in which Hunter Biden held a 10 percent stake through a company called Skaneateles LLC.

BHR is primarily owned by Chinese investors, including the state-controlled Bank of China.

Hunter Biden owed Faegre Baker another $20,909 for “Burnham Restructu,” which appears to refer to the Burnham Financial Group, which former Hunter Biden business partner Devon Archer and others invested in as part of a plan to create their own financial services conglomerate.

Hunter had an office at the New York headquarters of an asset-management firm that was intended to be merged into Burnham as a part of a deal called a “roll-up,” the Wall Street Journal reported in 2019.

Joe was able to pay the bills after earning millions of dollars through his and his wife’s companies after he left office as vice president.

Some of the wave of cash came from their book deals and speaking engagements.

Some of that difference can be accounted for with salaries earned by First Lady Jill Biden and other sums not required on his reports – but still leaves $5.2million earned by Joe’s company and not listed on his transparency reports.

Here is the Office of Government Ethics filings. CelticCapri Corp is one of Joe and Jill’s businesses they use for speaking and writing engagements:

The Daily Mail wonders if the missing income is connected to Hunter’s legal fees for his agreement with a Chinese energy company.

Emails on Hunter’s laptop suggest the “big guy” would receive a 10% share in the deal with CFEC China Energy Co. Hunter’s business partner Tony Bobulinski confirmed the “big guy” who should get 10% in the emails is Joe Biden.

Bobulinski also wrote in his statement that Hunter called Joe “my chairman and frequently referenced asking him for his sign-off or advice on various potential deals that we were discussing.”

Joe Biden: “I’ve never spoken to my son about his overseas business dealings. Here’s what I know — I know Trump deserves to be investigated… You should be looking at Trump. Trump’s doing this because he knows I’ll beat him like a drum.”

Any of us would be in prison. Though Al Sharpton still owes the IRS over four million dollars, and they seem to not miss it.

Where is the long-overdue IRS audit of the “Big Guy” to examine his non-reporting and tax avoidance on his ill-gotten, ten percent cut of his sociopath, ne’er-do-well offspring’s foreign bribery lucre?

They are busy looking in to Tesla.

No doubt. And Trump as always within the next few weeks they will go after DeSantis.

All this information easily available to our country’s “press hounds,” and if not, they could get them the same way they got Trump’s tax returns — illegally. And, of course, unlike Trump’s tax returns, there was “something there” in Joe’s… and everybody knew it.
But for a Democrat, that investigation was off-limits until other Democrats gave the all-clear.

Yeah, and those are just the financial records we know about. Most are still hidden.

Hey, lay off the big guy. Give him credit. Most politicians don’t report their graft. He is paying tax on his.

In my experience, there is another reason to push the son’s money on old Joe – Hunter’s ex-wife. The deal is to shelter the income from alimony and child support and then in the future Joe covers the son’s expenses. While everyone is looking in the direction of the Big Guy or Chairman actually being involved, which beyond his last name, he certainly is too stupid to add any value. The fraud is not on the American people but on Hunter’s ex’s and his stripper mommy. I have two questions. First, did Creepy Sleepy Joe deduct those payments for H or show them as business expenses? And second, were gift tax returns filed?

Wouldn’t Joe’s $800,000 in payments for Hunter’s legal bills be considered a gift by the IRS? It was my understanding one has to disclose these gift payments to the IRS and that such disclosures help prevent one from going over the lifetime gift limit. I believe there a specific IRS form for such reporting.

Anything above the annual gift tax exclusion limit, $16,000 per recipient for 2022, needs to be reported on a specific form, for the reason you stated
.

Damn, don’t scare me like that. I had to go back and read the rules, and discovered that the limit is double if you file jointly

These stories are a continuous slow drip, instead of exposing everything all at once and it goes away after a few days. These near daily stories keep the story in the news for an extended period of time. The question will migrate to what is the DOJ lawyer in Delaware going to do in the end?

Pondering getting Mirada Devine’s Laptop from Hell
Anyone read it yet?

Yes, I have. Great short book. Very well written but could have been 100 pages longer.

So, I guess I am just naïve here. How in the world does a private individual have $800,000 in legal fees? That just seems insane to me. That is close to half the money I will earn in my career (well, maybe not with the way inflation is going).

I’ve never hired a lawyer. Is it usual to cost so much? Should I just mark a lawyer down as something I have no chance of affording? My mind is blown by that number.

That’s because you’re in the wrong industry. You need to find a captive puppet government who can arrange for a major industrial combine in their country to give you a job entirely outside your field of expertise at a salary of multiple millions of dollars a year. Then you can throw 800 grand at a lawyer as a sort of tip for the opportunity.

Yup. You may be naive but you are lucky too. In the legal business, as in anything else, you get what you pay for and supply and demand applies as well. When I retired from practice a decade ago my hourly rate was $600. Now partners with a specialty that is in demand bill $1000++/hr. And, of course, the lawyer has to be a “progressive” Democrat to be trusted, making the universe of potential lawyers that much smaller still. So bills adding up to $800K over how many months would not be that unusual for an individual with as many legal issues as Hunter has. I’d love to see Elon Musk’s legal bills.

“Hunter’s assistant Katie Dodge…”
What a perfect name for the bagman’s secretary!

That’s her married name. Her maiden name was Katie Crook. Then she married Shady Dodge.

When does everything go BOOM?

Joe’s immediate family earned almost $1.8 million in income that isn’t required to be reported on his government disclosures? That’s a corruption loophole I could drive a Saturn V through, and the article glosses over it.

The article also glosses over obvious implications of Joe paying Hunter’s legal bills. Hunter is not Joe’s dependent. Did Joe report that $800k gift on his tax return and pay the rather substantial gift tax, both requirements of the Internal Revenue Code?