“when people start to question the truth — Who won the 2020 election? Was Jan. 6 an insurrection? — I found that unsustainable” 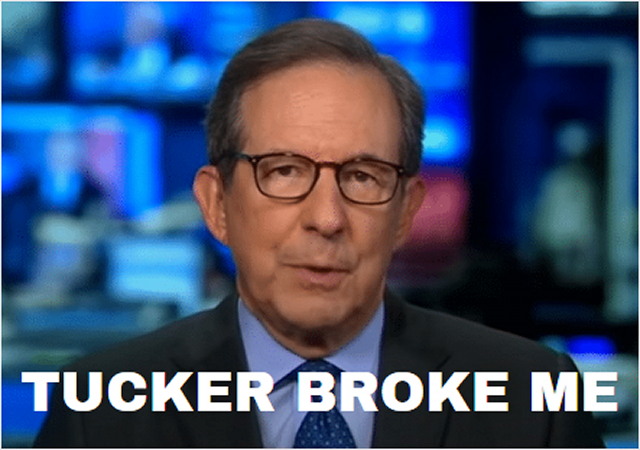 According to a recent profile of Chris Wallace in the New York Times, one of the main reasons he left FOX News last year was Tucker Carlson’s documentary questioning the official narrative of January 6th.

If true, FOX News viewers owe a debt of gratitude to Tucker Carlson.

The New York Times piece is behind a paywall, but Todd Starnes of Townhall has details:

Chris Wallace, the disgraced ex-Fox News Channel host, took a number of cheap shots at his former place of employment during an exclusive interview with The New York Times.

“I just no longer felt comfortable with the programming at Fox,” said Wallace, the notorious never-Trumper.

He castigated both the network and Tucker Carlson, the top-rated host in all of cable television.

Mr. Wallace told The Times he spent “a lot of 2021 looking to see if there was a different place for me to do my job.”

He told the newspaper that he was “so alarmed by Mr. Carlson’s documentary ‘Patriot Purge’ — which falsely suggested the Jan. 6 Capitol riot was a ‘false flag’ operation intended to demonize conservatives — that he complained directly to Fox News management.”

“Before, I found it was an environment in which I could do my job and feel good about my involvement at Fox,” Mr. Wallace said. “And since November of 2020, that just became unsustainable, increasingly unsustainable as time went on.”

It’s funny to hear someone talk so passionately about the importance of truth after accepting a job at CNN.

Chris Wallace was a fixture at FOX News for years, but he clearly had a severe case of Trump Derangement Syndrome. I’ll never forget watching Trump’s RNC speech in 2020, finding it inspiring, but then watching Chris Wallace dump all over it on FOX News. It was one of those moments where you wonder if you’re experiencing the same reality as others.

And who can forget Wallace’s horrible performance as a 2020 election debate moderator, where he went to bat for Biden in a way that would make Candy Crowley blush?

In case you’ve forgotten, his performance at that debate was so awful that the network gave him an opportunity to defend it:

Wallace will now host a show on CNN’s new streaming service CNN+ where he will be free to focus on his pathological hatred of Trump as much as his heart desires.

FOX News is better off without him, and if Tucker Carlson played a role in his departure, I have only two words to say.

Liberal Playbook: Never take the blame when you can blame others and there are always others to blame.

Without a doubt Carlson cries himself to sleep every night over this.

IOW, yet another reason to be very thankful for Tucker Carlson.

Hahahaha. Always suspect the self-proclaimed “journalists” and “newsmen” who use the word TRUTH to describe something that isn’t even fully documented or researched. Facts are still coming out after a year. Truth…….hahahahahahahahahahaha. He is just another political person hiding behind the veil of news.

Wallace left because he was unable to exert his liberal bias into the opinion side of Fox news. That’s the real story. He can try and sell it however he wishes but the fact is he and some others on the ‘news facts only’ side at Fox; Jennifer Griffin looking at you, have consistently carried water for their own ideological bias despite their invocations of ‘facts only’.

I think he was forced to leave. Why else would he accept a lowly job at CNN? Even CNN wasn’t interested in giving him a real job. Wallace is through. He should just retire.

I think the situation with Wallace is analogous to the post about the teacher who was concerned about being prohibited from interjection of his family life to K-3. In both cases these individuals wanted a platform for bringing their ideology and personal beliefs into their workplace.

In the case of Wallace he wanted to continue to apply a left-wing spin to hard news. In the case of the teacher he wanted to retain the ability to broach discussion about his family life. In neither case was their personal viewpoint or opinion relevant to the work they were paid to perform.

and don’t let the door knob hit you where the good Lord split you.

I would prefer it did, hard and repeatedly.

I see Chrissy going down the same road as Shepard Smith, leave a highly rated network to a network that nobody watches. Wallace was on Fox air twice a week, he would come on the air on Friday, on various shows plugging his Sunday show then for a hour on Sunday.
He was basically dead weight especially after the debate debacle.

Other than being a member of the lucky sperm club, I could never understand why Wallace was employed in the media to begin with. I never heard anything particularly insightful from him. He doesn’t come off as very bright or articulate or even good looking.

He has always been a complete lightweight particularly compared to Hume, Carlson, Baier, etc.

Take away his last name and he is likely working a minimum wage job somewhere.

He is the poster boy for nepotistic privilege.

And we wondered what Rand Paul has been up to, nothing good!

Well now there is a genuine question as to who or what is “not sustainable”. And it looks like Wallace was the wrong answer to the question. I for one won’t miss him.

If you had one dollar for each person that misses him you wouldn’t have enough to buy a banana.

But those are matters of opinion. He just doesn’t like to acknowledge that.

I thought journalists were supposed to question the official narrative

Strangely, Wallace is perfectly okay with the wholly unsustainable question of who won the 2016 election.

While I’m sure it was voluntary, I doubt there was any sliver of a fight to keep him. He wasn’t particularly rated well and his need to defend himself highlights how unpopular he was.

Beautiful pith and irony in your phrase, Mr. LaChance: “It’s funny to hear someone talk so passionately about the importance of truth after accepting a job at CNN.”

If Wallace hears of it, he may jump up and give you a Smith-Slap.

“If Wallace hears of it, he may jump up and give you a Smith-Slap.”

I doubt he would have the courage to do it himself. More likely he would call Will Smith and say, “Mr LaChance called me baldy.”

He never brought anything other than his father’s name to the table. His complete inability to control the debate was more than proof enough of that. CNN streaming? Purgatory.

Master and Commander: The Far Side of Purgatory.

Imagine that! Being run out of town by a young Turk!

People have issues with Tucker.. but I agree.. TY,,,if this is true.

TBS, Chris Wallace’s father was Mike Wallace,, that is why he got where he got. Not talent, not ethics,,, nepotism… People can say the same thing about Peter Doocy. I guess time will tell.

Bye Felicia! I only wish he had taken Juan and Geraldo with him.

At least Peter Doocy occasionally commits an act of journalism (such as asking Slow Joe Biden a tough question). The same can never be said about Chris Wallace.

“And who can forget Wallace’s horrible performance as a 2020 election debate moderator, where he went to bat for Biden in a way that would make Candy Crowley blush?”

The day the Presidential debate moderator asks questions that disfavor Democrats will be the day they decide that it is no longer necessary to participate. Watch any old debate on C-SPAN for proof.

Doocy doesn’t have the highest of high profile jobs and he’s the only one challenging Uncle Joey and the circus lady.

Wallace, in his comments about the election,clearly ignores the illegal and unconstitutional end run around the Electors Cause in several battleground states and the refusal of the courts to consider the substantial evidence of fraud, which was never examined on the merits of the proof the same by any court.

Then we can’t thank Tucker enough, I couldn’t stand Wallace. He was every bit the crooked communist sympathizer his dad was.

What makes it even funnier is cnn started up cnn+, their digital site today. And already they were offering it at half off.
Great choice wallace, the place will go bankrupt and you’re out of a job.

Chris Wallace’s departure from Fox certainly wasn’t much of a loss. Like his father before him, Chris is destined for the heap of irrelevance in the news business. Good riddance!

Opinions are one thing but i was ashamed for both him and Fox with his debate performance. Fox should have fired him for that

Wallace was always a mediocrity (at best) who only had a career because of who his father was and his ties to the Swamp. Moving to a basement studio and doing podcasts at CNN is even beyond his competence. I’m no fan of Carlson’s but Wallace’s statements about Carlson are childish, further proving his mid-wit status.

So, Chris Wallis owns the Truth, and no contrary opinion may be proved. Not an ounce of science in his arrogance, is there.
Good riddance!