“Let’s support our allies, not our enemies” 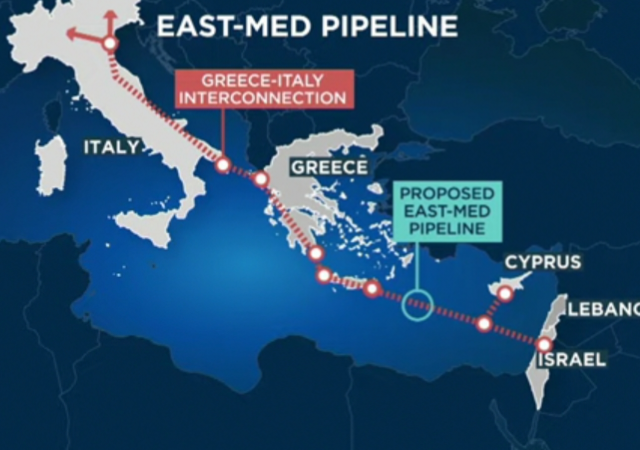 Interviewed at the 3rd Southeast Europe and East Med conference held in Washington March 14-15, the senator said he was “deeply disappointed in the way the State Department dealt with our allies in the region regarding the viability of the EastMed pipeline.”

EastMed was the planned 1,180-mile natural gas pipeline across the Mediterranean Sea from Israel to southern Europe that the Biden administration killed in January. The pipeline, expected to cost $7 billion and to carry at least 10 billion cubic meters of gas a year, would ease Europe’s reliance on Russian oil. Sen. Menendez, who has long supported the project and co-sponsored the Eastern Mediterranean Security and Energy Partnership Act of 2019, wants the U.S. to rethink supporting the EastMed pipeline.

President Biden gave up on EastMed after approving the Nord Stream 2 pipeline that would have increased Germany’s dependence on Russia. Following Russia’s invasion of Ukraine, Germany and other Europeans began to see the folly of relying on Russia.

One might have thought President Biden too would see that relying on one’s enemies is imprudent. One would have been wrong.

The Biden administration went hat in hand to Venezuela and is now trying to rush through a new bad deal with Iran, in order to increase supply and lower oil prices. Biden also reached out to the leaders of Saudi Arabia, a traditional ally whose leader Biden had previously spurned, and the United Arab Emirates, but neither would take his phone calls. Both are deeply worried about Iran and the administration’s eagerness for a rapprochement with it; or at least, about U.S. unwillingness to hold Iran to account.

The democratic aspirations of the Venezuelan people, like the resolve & courage of the people of Ukraine, are worth much more than a few barrels of oil. My statement on the Admin's reported talks with VZ breathing new life into Maduro's reign of torture: https://t.co/3U4x6nGsLP

I urge Romania, Slovakia, Bulgaria, and Poland to immediately transfer Soviet era-built fighter jets to the Ukrainian air force as it defends civilians under aerial assault from Russia. pic.twitter.com/K8M9NbkQEk

Speaking of our friends, the senator applauded NATO’s past success in underpinning the peace and prosperity of the past 75 years, and recent efforts to strengthen the alliance. “I welcome European engagement in meeting its security needs. I welcome the German decision now to spend 2% of GDP to move in that direction… our best way to achieve that goal of European defense is what has been successful for 75 years: strengthening NATO and meeting that obligation.”

And speaking of NATO and of EastMed, in killing the latter, Biden was reportedly motivated at least partly by a desire to please Turkey, which was trying to muscle its way into any pipeline project.

This is the same Turkey that bought a Russian S-400 air-defense system, although it’s part of NATO. The U.S. responded by barring Turkey from buying F-35 aircraft it wanted. (Per Reuters, the U.S. suggested Turkey solve the problem by shipping the S-400 system to Ukraine.)

It’s the same Turkey that illegally invaded and partitioned Cyprus in 1974, and now demands a cut of the pipeline planned from Israel to Cyprus, then Greece and beyond. As people said of France under De Gaulle, with friends like this, the U.S. sure doesn’t need enemies.

The senator, who is a Democrat, carefully avoided mentioning President Biden during the interview, although he did mention disappointment with the State Department. Nevertheless, his disapproval of administration policies is clear.

Isn’t it interesting that the only pipelines the pedophile-in-chief kills are the ones that allow people to buy oil and gas from people other than Putin?

How does American cancel a foreign pipeline? Are we just refusing to pay for it? Or, are we threatening to withhold aid from countries who use it?

Threatened sanctions on the companies doing the work.

At least that was how Trump killed the Nordstream2 until the pedophile turned it back on.

Thank you for asking that question. I was going to ask as well.

Biden loves piplelines. He and Hunter had a money pipeline that went from Ukraine directly into their bank account.

How is it the US can even determine the fate of that pipeline, or for that matter, ANY infrastructure that does not directly affect US citizens???

I was just gonna ask the same.

I also was going to ask that same question

‘How can the US determine the fate …?’

Use the tentacles of govt to lean on any entity that acts contrary to their wishes. A few examples:
1. Withhold export licence for advanced technology and weapons to the nations involved.
2. ‘Suggest’ that investments or finance by US persons, banks or funds are unwelcome; nice bank you have, be a shame if…
3. Use the dominant position in the IMF to squelch other Nations from providing finance
4. Use foreign aid as a weapon to reward compliance and punish dissent
5. Whisper that the US may rethink where our overseas bases are located which threatens the local economy
6. Approve or disapprove a nations arms sale or particular weapon being adopted by NATO; Beretta as one example

That’s the tip of the iceberg. Lots of ways for the US to bully other Nations and our govt wields them all, which is why other Nations don’t particularly like us.

Thanks for the insight, CommoChief!

Let me join the line of people also wanting to ask this question.

Well Sen. Menendez you had a hand in putting Sell Out Joe, one of your own by the way, in office. America’s ‘allies’ are no longer sure if America is actually an ally. The non aligned world is wondering the same and will now hedge its bets and play both sides -the West v China. A superpower whose dependability can hang in the balance depending on who wins the White House is not a super ally. America will sell out and abandon anyone after an election and do it live on tv.

I’d be more impressed if this wasn’t Senator Menendez, who is and has always been a self-serving blowhard.

Well isn’t that how you get to be a senator?

Well, Bob, you can express your dissatisfaction with biden by voting against his radical USSC pick. Unless you’re just grandstanding, of course.

Well Bob, you coted to confirm Blinken and every other dem nominee that has come up for a vote. You own this mess and now have no way to clean it up. Hope you enjoy that pile of dung all over your face.

Bob was due a cut and now the scheme has dried up, but hey what’s a few billion in payoffs among friends

Listen to Erdogan’s rhetoric. He wants Islam to control Europe. Bowing to anything Turkey wants regarding Europe is bowing to that endgame. The people talking “100 million climate migrants” are similarly pursuing that same endgame. Unsurprisingly Biden is sucking up to Iran, another Islamic nation with designs on expanding the Umma.

He’s probably also disappointed no pre-pubescent girls were at the party.

I’m glad Bob took the time from his schedule of visiting rich guys private islands to abuse underage girls to bring us his important views on this….

Where was Senator Melendez when Bidet closed down the Keystone XL pipeline? Crickets!

I bet there’s a “strongly worded” letter SOMEWHERE he can “whip up” (oh – can’t say “whip up” because that’s RACIST – you know) !