The EU finally wakes up to Trump’s warning, moves to cut dependence on Russian energy supply. 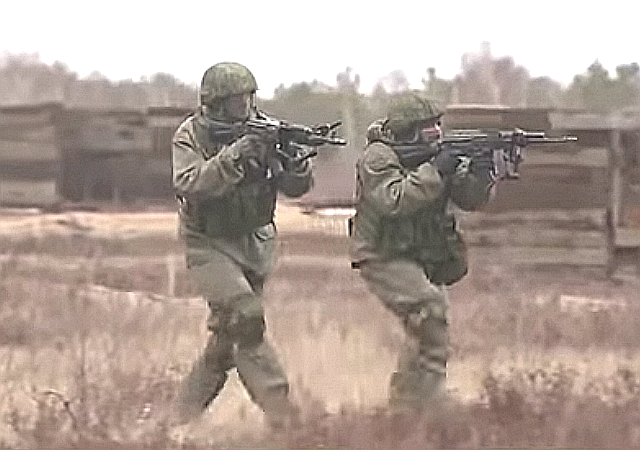 With Ukrainian forces mounting a counter-offensive to regain control of towns near the capital Kyiv, Russia is revising its military objectives as the invasion enters its thirty-first day.

The Russian military campaign which began with the lofty promises ranging from “de-militarizing” and “de-nazifying” the country to outright the overthrow of President Volodymyr Zelenskyy’s government in Kyiv, has now been dialed down to solidifying Russia’s territorial gains in the eastern part of the country, deputy chief of the Russian general staff, Col. Gen. Sergei Rudskoi, declared on Friday.

The “main goal” of the operation will now be to maintain the control over Donbas, a region Russia partially controls since 2014, the senior general said.

The Associated Press reported the shift in Moscow’s focus following a month of fighting:

Russian forces in Ukraine appear to have shifted their focus from a ground offensive aimed at Kyiv to instead prioritizing what Moscow calls the liberation of the contested Donbas region, suggesting a new phase of the war.

It appears too early to know whether this means President Vladimir Putin has scaled back his ambitions in Ukraine, but Russian military moves this week indicate a recognition of the surprisingly stout Ukrainian resistance. Russian-backed separatists have controlled part of the Donbas region of eastern Ukraine since 2014. (…)

Putting a positive face on it all, the deputy chief of the Russian general staff said his forces had largely achieved the “main objectives” of the first phase of what Moscow calls a “special military operation” in Ukraine.

The dialing down of the Russian military ambitions comes as Ukrainian President Zelenskyy claims inflicting significant losses on the invading forces.

[President Zelenskyy] has claimed that more than 16,000 Russian troops have been killed since the start of the war, and senior commanders have been among the victims.

“The Armed Forces continue to repel enemy attacks in the south of the country, in Donbas, in the Kharkiv direction, and in the Kyiv region,” he said.

“By restraining Russia’s actions, our defenders are leading the Russian leadership to a simple and logical idea: talk is necessary.”

He added that a total of 37,606 people have been rescued from the blocked cities.

Amid raging conflict in Ukraine, President Joe Biden was in Europe to attend a combined summit of G7 industrialized nations, the European Union and NATO member states. The meeting held in Brussels, Belgium sought to demonstrate unity among Western nations in face of the Russian aggression.

President Biden’s tour of European countries included a visit to U.S. troops station in the frontline state of Poland. In recent weeks, the Russian forces took aim at Ukrainian targets just miles away from Poland.

The U.S. president also met Ukrainian ministers during the tour. “Biden has held talks with Ukraine’s defence and foreign ministers in Poland,” the BBC reported. “Some say the fact the ministers left Ukraine for the talks is a sign of growing confidence in how the war with Russia is going,” the broadcaster added. Further details of the meeting are yet to be reported.

Biden told soldiers from the 82nd Airborne Division that the struggle in eastern Europe represents a historic “inflection point.”

Biden was briefed on the humanitarian situation, with more than 3.7 million refugees fleeing Ukraine, most of them into Poland.

Having mocked and jeered former U.S. President Donald Trump for calling for an end to the dependence on Russian energy, European countries are finally moving to reduce their reliance on Russian gas

On Friday, the EU signed a major gas deal with the U.S. towards meeting that aim.

The BBC covered the details of the U.S.-EU gas deal:

The agreement will see the US provide the EU with extra gas, equivalent to around 10% of the gas it currently gets from Russia, by the end of the year.

The bloc has already said it will cut Russian gas use in response to Russia’s invasion of Ukraine. Russia currently supplies about 40% of the EU’s gas needs.

The new total will represent around 24% of the gas currently imported from Russia.

Germany’s Economy Minister Robert Habeck said on Friday that the country is planning to almost completely end Russian energy imports by the end of the year.

“By the middle of the year, Russian oil imports to Germany are expected to be halved. By the end of the year, we aim to be almost independent,” a document published by the Ministry for Economic Affairs and Climate Action said. The plan also calls for coal deliveries from Russia to end by the autumn.

Habeck confirmed that current contracts with Russian companies to import energy will not be renewed. He also acknowledged that Germany would only be able to wean itself off Russian gas deliveries by mid-2024.

The developments come as the Kremlin demands Western energy buyers make payments in roubles, a move aimed at shoring up the Russian currency which took a hit following the recent round of sanctions from the U.S. and the West. “Russia will seek payment in roubles for gas sold to ‘unfriendly’ countries, President Vladimir Putin said on Wednesday, and European gas prices soared on concerns the move would exacerbate the region’s energy crunch,” Reuters reported Wednesday.

The Russian announcement rattled Germany, one of Russia’s biggest gas consumer. “With his demand for payments in the Russian currency, Vladimir Putin has dealt a surprise blow to Western countries still using large volumes of Russian gas for their energy needs,” Germany’s DW News noted in a separate report on Friday.

Russian Foreign Minister Sergey Lavrov is heading to Beijing to meet his Chinese counterpart for the first time since the conflict began in Ukraine. China has been Russia’s biggest backer since President Vladimir Putin ordered the invasion of Ukraine last month.

“Chinese Foreign Minister Wang Yi is due to host Russian counterpart Sergey Lavrov in what will be their first face-to-face meeting since the invasion of Ukraine, when ministers from countries bordering Afghanistan gather in China next week,” The South China Morning Post reported. “War in Ukraine expected to be high on agenda,” the newspaper added.

Well… Russia has been throwing massive amounts of resources at Kyiv and have not much to show for it. They’ve lost a disproportionate amount of assets and personnel. Even if Belarus joined in, I doubt there would be much change. It’s a wise move to shift resources to the south where they are making some headway, consolidate the gains, and sue for a cease fire keeping those gains. In the meantime, the “strategic withdrawal” should be used to reduce military and economic capacity of Ukraine. If I was Ukraine, I would shift also, and press the Donbass region to regain some of the lost territory.

If only someone had warned them against dependence on russia for energy…..

What a novel approach.

The unspoken and verboten point…. stolen elections led to this. Soft serve FJoe Biden and his puppeteers have destabilized the world…. an acceptable part of their plan but not in their control. The two weeks to flatten the curve resulted in two years that flattened the world. If we have a few spare decades, this might be partially straightened out but at a great cost.

“”By the end of the year, we aim to be almost independent””

Well yeah, except for the US and other “alternative” suppliers. I wonder if Slow Joe is going to let the US increase production to make up for the LNG we’ll be shipping off to Europe?

I’m pretty sure that he will NOT allow an increase of production here , but WILL send LNG to Europe so that we will be colder and more in the dark. It is the Democrat thing to do.

“ With his demand for payments in the Russian currency, Vladimir Putin has dealt a surprise blow to Western countries still using large volumes of Russian gas for their energy needs,”

It’s almost as if the US doesn’t have a monopoly on sanctions.

For some reason CRT, race hustling, trannies and toppling heritage statues isn’t translating into the worldwide support our progressive betters thought it would. So much for indispensable nation.