Biden’s nuke deal “guarantees Russia will have a sanctions evasion hub in Iran.” 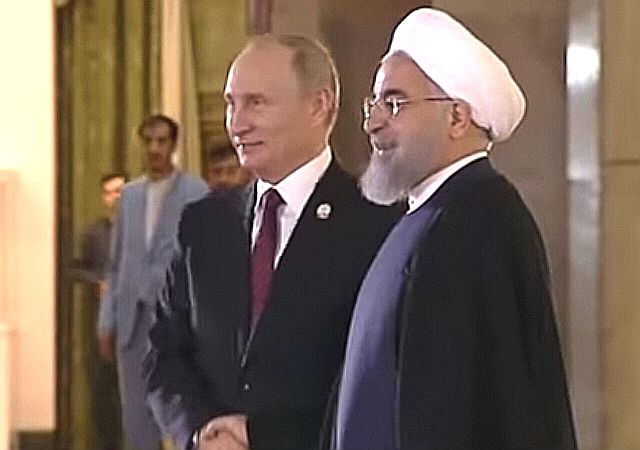 As President Joe Biden’s administration finalizes the nuclear deal with Iran, Russia is pushing to use the agreement’s provisions to bypass U.S. and Western sections placed in the wake of its invasion of Ukraine.

Russia is “insisting that its trade with Tehran be exempt from the destructive Western sanctions imposed on Moscow in response for invading its neighbor,” the U.S. journal Foreign Policy noted on Wednesday. “Moscow is seeking to use the Iran deal to shield itself from the full effect of Western sanctions,” the magazine added.

The fact that the deal negotiated by the Biden administration will allow Russians to use Iran as a “sanctions evasion hub” was confirmed by the chief Russian negotiator, Michael Ulyanov.

On Saturday, Richard Goldberg, senior advisor for the DC-based think tank Foundation for Defense of Democracies (FDD), said to Ulyanov on Twitter: “The deal you put together already guarantees Russia will have a sanctions evasion hub in Iran. You just want written assurances that the US will not impede that hub to embarrass the Biden administration and show Russia is not actually isolated.”

The top Russian negotiator agreed with the description of Iran as a future “sanctions evasion hub” for Kremlin, saying that this “interpretation of events is accurate.”

The deal you put together already guarantees Russia will have a sanctions evasion hub in Iran. You just want written assurances that the US will not impede that hub to embarrass the Biden administration and show Russia is not actually isolated. We get it. https://t.co/RMrmZU17e1

After 11 months of talks in the Austrian capital Vienna, President Biden is hoping to restore the 2015 nuclear deal with the Iranians.

Russia — along with the United Kingdom, Germany, France, and China — has been part of the European Union-sponsored negotiations. The Biden White House negotiated indirectly, as former President Donald Trump pulled the plug on the Obama-era deal in 2018.

The restored Obama-era deal will not only protect Russians from the full extent of the Ukraine sanctions, but it will also shore up Iran’s ability to support international terrorism. The circulated draft of the new Iran nuclear agreement suggests that President Biden will take off the regime’s military arms, the Islamic Revolutionary Guard Corps (IRGC), from the U.S. terror list, reversing a 2019 decision by the Trump administration.

These details of the proposed deal emerged from a letter addressed to President Biden by a bipartisan group of House members. “Lifting, waiving, or rescinding terrorism-related sanctions will violate his previous commitment to Congress,” the copy obtained by the U.S. news website Jewish Insider said.

The letter dated March 10, and signed by several U.S. lawmakers, including 12 Democrats, noted:

Among other issues, we are highly concerned about reports indicating the potential lifting of the Foreign Terrorist Organization (FTO) designation of the Islamic Revolutionary Guard Corps (IRGC)1 and of the sanctions placed on members of the office of the Supreme Leader.

Without adequately addressing Iran’s role as the world’s leading state-sponsor of terror — which was noticeably absent from the 2015 JCPOA — and simultaneously providing billions of dollars in sanctions relief, the United States would be providing a clear path for Iranian proxies to continue fueling terrorism.”

The lawmakers concluded that “from what we currently understand, it is hard to envision supporting an agreement along the lines being publicly discussed.”

The Biden administration is trying to slip a new nuclear deal with Iran under the table quietly.

In recent days, Western diplomats have signaled the talks had reached their conclusion, laying the final decision with Iran. Ali Shamkhani, the secretary of the country’s powerful Supreme National Security Council, wrote on Twitter early Thursday trying to instead blame America for the deadlock.

The “US approach to Iran’s principled demands, coupled with its unreasonable offers and unjustified pressure to hastily reach an agreement, show that US isn’t interested in a strong deal that would satisfy both parties,” Shamkhani wrote in multiple languages. “Absent US political decision, the talks get knottier by the hour.” (…)

Iranian President Ebrahim Raisi backed his general on Twitter, saying: “The government is doing negotiations in the way of the supreme leader’s framework and has not and will not retreat from any red lines which were announced.”

The Biden Administration is negotiating alongside Putin’s Russia and the Chinese Communist Party to revive the Iran Nuclear Deal. No deal is better than a very, very bad deal. pic.twitter.com/eIbFD44Flo

Reports suggest that the Biden White House concessions have far exceeded the Iranian expectations. Earlier this week, Russian envoy Ulyanov admitted that Iran, backed by Moscow and Beijing, out-negotiated the Biden negotiating team led by Robert Malley. “Iran got much more than it could expect,” Ulyanov said. “Our Chinese friends were also very efficient and useful as co-negotiators., adding that on “many, many points though the joint efforts we succeeded.”

Pudding Brain’s administration is desperate for ANY deal, and everybody knows it. When your desperation for ‘the deal’ overrides any actual logic of what the deal includes, then you’re functionally being blackmailed. You NEED ‘the deal’, so you’re forced to agree to ever escalating demands, because once you pay off a blackmailer the first time, you never get rid of them because they KNOW you’ll pay.

My theory is that Russia has been using the Iran negotiations to pressure the US into preventing the transfer of Polish MiGs to Ukraine.

Biden plans to use Ukraine in order to sustain the Obama, Biden et al coup and civil war (Slavic Spring) and provide an ethical backdrop for a war with Russia, and perhaps pull a Gaddafi that will sodomize and abort Putin, and redistribute Russian resources a la Libya.

Everybody laughed at claims that the strange things Trump did were some sort of “3D Chess.”

Biden is losing his shirt at 1D Checkers.

It’s more like he took off his shirt and threw it at the Iranians along with his wallet and car keys.

The Iran deal will lead to consequences that will astonish those who don’t understand. The immediate effect will be Saudi Arabia acquiring the technology to manufacture their own nukes from Israel. By allowing Iran to move forward with their nuclear program is a guaranteed way to foment a nuclear exchange in the Middle East. Israel will know before Iran pushes the button and will turn Iran into an asphalt parking lot. The Xiden administration is spinning out of control rapidly and many bad actors will now do things that wouldn’t happen under any other President in the last 70+ years. Maddening just maddening!!!!!

Once upon a time, when Biden became President, There was a deal in the making: Putin was supposed to get the two sections of Ukraine and Ukraine neutrality. Somewhere along the line, Biden Admin betrayed him, ( giving China intel??), he then got majorly pissed off and he went in, surprising even his forces who didn’t think that was gonna happen.
Russia’s chief allies are now China, Iran and Syria ~oh great.
Such alliances not only soften the blow of the sanctions on Russia considerably, but set up one of the most dangerous geopolitical situations in history, with Israel in the crosshairs. Oh, More great.
Ukraine is toast. And Putin says FJB.