Russian envoy Michael Ulyanov: “Iran got much more than it could expect.” 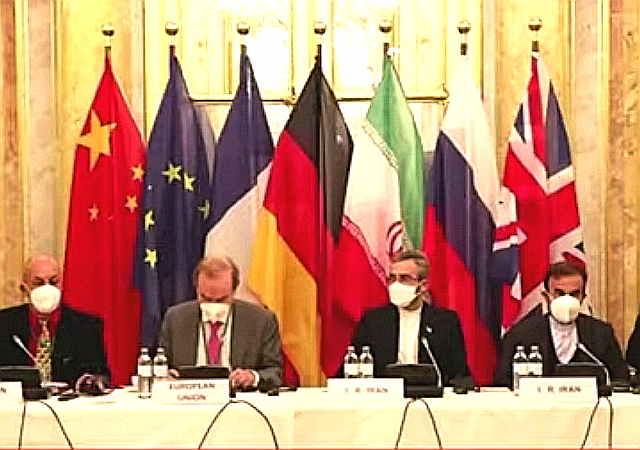 China and Russia teamed up to help Iran out-negotiate the Biden White House during the nearly-finalized nuclear deal, Russia’s chief nuclear negotiator admitted while talking to the Iranian state media over the weekend.

The Iranian regime fought for its “nuclear and national interests … like lions… for every comma, every word and as a rule quite successfully,” Michael Ulyanov, who headed the Russian delegation in the Vienna nuclear talks, told Iranian state news agency IRNA.

“Iran got much more than it could expect,” he said. “Our Chinese friends were also very efficient and useful as co-negotiators., adding that on “many, many points though the joint efforts we succeeded.”

The Russian envoy disclosed that backed by China, they managed to get significant concessions from a weak U.S. negotiating team led by Robert Malley, a longtime Obama confidant and President Biden’s special envoy on Iran. “I can recollect dozens of such cases when, on rather serious significant questions, we managed together to get positive results, close to what we wanted to achieve,” he concluded.

The revelations made by the top Russian negotiator confirm Israeli fears that President Biden is about to deliver a “spectacularly bad” nuclear deal with the Iranians, worse than the disastrous agreement negotiated by former U.S. President Barack Obama and his foreign sec Kerry.

Biden’s concessions to Iran, the world’s biggest sponsor of terrorism, have also alarmed the Europeans. “The new agreement would … lift sanctions from the Islamic Revolutionary Guard Corps,” the UK’s Daily Telegraph revealed Saturday. “Boris Johnson warned against signing a new deal with Iran that will ‘embolden’ terrorists,” the newspaper said.

In 2019, President Donald Trump’s administration added the IRGC to the U.S. terror list for its role in training and arming terrorist organizations worldwide and funding them with estimated a billion dollars each year.

The removal of the Islamic Guard from the terror list will be the most significant boost for international terrorism since President Biden handed over Afghanistan to the Taliban. “Besides creating much of Hezbollah and the Houthi rebel forces which have ruined Lebanon and Yemen, the group is responsible for terrorism across the Middle East and even in Europe and other parts of the world,” the Jerusalem Post recalled last week.

Gabriel Noronha, a senior Iran policy advisor at President Donald Trump’s State Department, warned of the damaging concessions made by the Biden administration to the Iranians.

On Monday, Noronha described in the Tablet magazine:

The deal being negotiated in Vienna is dangerous to U.S. national security, to the stability of the Middle East, and to the Iranian people who suffer most under that brutal regime. The lack of evidence to justify a removal of U.S. sanctions is illegal, and the deal that will be foisted upon the world without the support of Congress will be illegitimate. This deal will not serve U.S. interests in either the short or long term.

The Biden administration is preparing to end sanctions under Executive Order (E.O.) 13876, known as the Supreme Leader’s Office E.O., as soon as the deal is finalized. This would lift sanctions on nearly all of the 112 people and entities sanctioned under that authority, even if they were sanctioned under other legal authorities as well. This move is significant because the United States has used this authority to sanction some of the most evil people you can possibly imagine. Malley and his Russian go-betweens in Vienna have agreed that these people should now be free to roam around the world despite their murderous pasts, unshackled from any restraints on their financing, and plotting new terror attacks.

The Biden White House wants to endorse the deal without taking the U.S. House of Representatives or the Senate into confidence. Noronha “noted Congress would not have the opportunity to review the details of the accord and would not be able to do anything about it,” the newspaper Israel Hayom noted, quoting the former Trump White House official.

Noronha also noted that President Biden was “not in control of Iran talks,” and the negotiations with the Iranians happened with Malley.

Malley was the worst Obama White House staffer that President Biden could pick to fill this position. He was booted out of the 2008 Obama presidential campaign for “unauthorized” talks with Iran-backed terrorist group Hamas. But his shady dealings with Iran-sponsored terrorists did not derail his career. In 2015, he found his way back into President Barack Obama’s administration, serving as the White House “ISIS czar.”

Malley fiddled as Islamic State mutated from a Syrian jihadi militia to a worldwide terrorist movement. (It was President Trump who oversaw the destruction of the Islamist State’s Syria-based caliphate and the elimination of Abu Bakr al-Baghdadi, who acted as its global “caliph” with the allegiance of jihadis in the West and the Muslim world.)

The disaster in Syria and Iraq earned Malley the critical position in the Biden administration to negotiate the new nuclear deal with the Iranians. When Malley was appointed to the post by the Biden White House in January 2021, Republican Senator Tom Cotton noted on Twitter that he has “a long track record of sympathy for the Iranian regime & animus towards Israel. The ayatollahs wouldn’t believe their luck if he is selected.” Those fears have now come true.

Having watched the Biden White House negotiate disastrously with the Iranians, the Kremlin is threatening to scuttle the finalized nuclear deal if the U.S. does not grant a respite from sanctions imposed in the wake of the Ukraine invasion.

Russia wants “written guarantees” from the U.S., assuring that sanctions over invading Ukraine will not hinder Moscow from selling nuclear and weapons technology to the Iranians.

The Biden administration should “give us written guarantees at the minimum level of Secretary of State that the current [sanctions] process launched by the US will not in any way harm our right to free, fully-fledged trade and economic and investment cooperation and military-technical cooperation with Iran,” Russian Foreign Minister Sergei Lavrov demanded over the weekend.

A 3 toed sloth could outmaneuver Dictator Dementia and his ilk.

Or, the Biden team gave away the store because they secretly want Iran to nuke Tel-Aviv.

And, I know Jews who will secretly be glad because they can blame Zionists and Donald Trump.

The sloth working in the DMV in Zootopia is faster than Joe Biden.

We were not out-negotiated or maneuvered or anything like that- don’t believe the lie.

This was the desired outcome by the left.

What direct leadership we have ( defined as the puppets holding the offices, not the actual puppet masters) – are bought and paid for or otherwise compromised by their masters.

The last time they negotiated JCPOA with Iran, the Iranians joined them in an Arab, Syrian, transnational Spring, where progress was mitigated only through Russian intervention, and a limited American strike against the principal activist. Spring Forward, indeed.

This is humorous… because after reading the headline, my very first thought was, “The stone lions outside our library could out-negotiate Biden.”

Robert Malley, though born of Jewish parents, has been anti-Israel since Day One.

The negotiations must have been brutal:
“We’ll give you one pallet of unmarked currency.”
“No, we insist that you give us two pallets.”
“Ok, three pallets it is.”
“Wait a minute. Ok, we insist on.. um.. five pallets of unmarked bills.”
“Ten pallets and that’s our final offer. And we’ll throw in the planes we use to deliver them.”

Exactly. Both on the same team negotiating for Iran’s benefit.

So explain to me how this Malley fucker is not exactly what the left hoped Flynn would be for Trump x 10?

A measure of just how servile the Biden administration is with respect to Iran is the arrogance with which the Russian negotiator is willing to brag, in the faces of the Americans, about how lousy their negotiation was, even before a deal is signed. Anyone wth an ounce of integrity or self-respect would walk away from the table for this un-diplomatic slap in the face alone. But I suppose they already knew that Robert Malley has none, nor does his boss.

But no mean tweets, and that’s all that really matters.

Please tell me who could not out-negotiate Biden.

This idiocy is what happens when you want ‘the deal’ more than what you’re actually GETTING from the alleged deal.

That was always Trump’s strength. He knew when to say ‘NO’ to a bad deal, and he wasn’t going to give up a damn thing in the name of ‘negotiating’, unlike the ‘smart people’.

It’s why arrogant morons like Kerry and the Democrats got played for decades by the Palestinians, who knew that they were so desperate for ANY deal that they knew they could wring massive concessions just to get them to the table. So they’d play the idiots for the fools they were by demanding ever escalating concessions to keep them ‘negotiating’, and when they finally had taken everything they wanted, they walked away. Until the NEXT arrogant Democrat jackhole desperate for The Deal offered them more.

This is the worst diplomatic deal in American history

They aren’t done yet

The Biden Administration is the most incompetent and anti-American ever.

The Administration that promised to be the most transparent regularly lies fails to abide by the law. “America is Back,” the campaign slogan of the man in the basement, seems to be letting us go even further than under Obama.

The left hates us. Get that into your heads.

I didn’t mean to include the question mark. No need. They hate us. If you doubt me, watch them.

I don’t know what is worse. Knowing I would live to see this. Or knowing America would vote for it.

I was hoping America would vote for this after I died a bloody death.

Does anyone want to know just how much I want to slap that (blank) silly?

Everyone in their immediate circle has gone to their same law school.

It isn’t “out-negotiating” when the outcome is predetermined.