“Her cause of death is homicide based on complications of a traumatic head injury.” 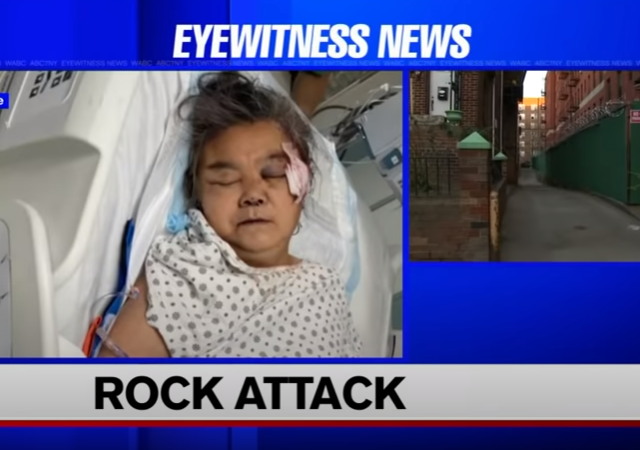 GuiYing Ma was an older Asian woman and a grandmother living in New York City. One day in November of 2021, while sweeping outside her apartment, she became the victim of a violent and completely unprovoked attack.

She has now died as a result of the injuries she suffered.

A 62-year-old grandmother in Queens has died weeks after she woke up from a coma after she was bashed in the head with a rock more than two months ago.

When Eyewitness News spoke to the family of GuiYing Ma earlier in February, they said it was nothing short of a miracle that she was showing some signs of improvement.

However, on Monday, Eyewitness News learned that Ma had died on Feb. 22. Her cause of death is homicide based on complications of a traumatic head injury.

The once outgoing, friendly and kind grandmother was sweeping her Jackson Heights sidewalk after Thanksgiving last year when someone bashed her on the head with a rock.

She had since been in a coma at Elmhurst Hospital until she showed signs of hope earlier in February.

The attack permanently damaged the right side of Ma’s brain. But the love between Ma and her husband, Zhanxin Gao, remained.

The story behind the attacker is familiar:

A 33-year-old man has been arrested for the savage attack. His next court hearing is in April…

“Before this incident, he was arrested 14 times. If he was released again, it’s highly possible he will attack other people again,” Gao said.

The attacker had 14 prior arrests. Will anyone in New York be held accountable for this horrific crime?

The report goes on to note that Ma is the fourth Asian-American to die in New York City in just two months as a result of attacks on Asians.

This woman’s head was bashed in.

EXCLUSIVE: GuiYing Ma has passed away. Cause of death is homicide based on complications of traumatic head injury. She had recently opened her eyes and even waved to her husband. https://t.co/t1BIUp2Id1

The suspect even allegedly kept attacking her after she was down.

Elisaul Perez has been charged by the District Attorney after allegedly striking GuiYing Ma in the head with a rock while she swept the sidewalk in front of her 38th Avenue and 97th Street North Corona apartment.

According to the criminal complaint, an eyewitness saw Perez engage in a verbal dispute with Ma just past 8 a.m. Nov. 26 before picking up a rock from the ground and hitting her in the back of the head.

Ma lost consciousness and fell to the ground, officials said. Surveillance footage captured Perez pick up the rock a second time and throw it at Ma while she was still on the ground. The eyewitness saw the rock on the ground next to her, covered with her blood…

Perez, a 33-year-old from Brooklyn, was charged with first- and second-degree assault and criminal possession of a weapon. He has been remanded, the DA’s Office told the Chronicle. The NYPD Hate Crime Task Force was notified, police said, but it is not clear if Perez allegedly acted out of any racial motivation.

This poor woman will never see her grandchildren again.

How much longer are we, as a society, going to put up with this?

“How much longer are we, as a society, going to put up with this?”

As long as you keep being soft on criminals – criminal justice reform, getting rid of tools to fight criminals such as Broken Windows policing, no knock warrants, stop and frisk, and legalizing or decriminalization prior illegal acts such as drugs and homelessness, and wanting to defund police – this stuff will continue.

The cops are getting it from both sides of the aisle when it comes to dealing with crime. Leftists want to defund police, but conservatives and libertarians want to defang police which may be worse. In the end, law abiding citizens are the ones to suffer. There are costs to everything in life and we need to decide if the costs of more victims is worth going soft on criminals.

Well said. It also inflames race hatred when people are taught from a young age that certain races are victims and others are “oppressors”. I would suspect to see an increase in hate crimes over the next 20 to 50 years as the influence of CRT seeps into society.

Correct, teaching children that some people are born being oppressors and others victims is going to motivate another generation to blame all of their problems on the oppressor races and justify violence against them. CRT seems to be a spin-off of the Nazi campaign in the 30’s to blame the Jews for all German problems. We already see in blue cities where the the legal apparatus, politicians and press rationalize theft and shop lifting as social justice. The violence that we see against Asians and Jews in particular and the elderly in general seems to be the vanguard of the left taking direct action against “oppressors” with the demonized police and concerned citizens vilified, prosecuted and ruined, if they take action against the criminal attackers.

Another victim of a Dazzling Urbanite! I wouldn’t visit NYC if you paid me. SHITHOLE.

I think we need to go Western! I’ve heard that everyone was polite back then since a smart ass remark could get you killed, much less an assault on your person! Our politician’s are NOT going to fix this.

I know it’s hard to keep track but didn’t his dirtbag get let right out to do it again? Seems a lot racist.

“How much longer are we, as a society, going to put up with this?”

Civilization is a thin veneer that is barely skin deep. In some places it has worn through and the jungle is exposed. There is a point of no return and we are either right on the edge or just a little past it.

Most of the high violent crime areas are democrat controlled and due to Afrimative Action many of the police chiefs are black women who are not qualified for the job. However, Affirmative Action is so popular it is now being applied it to the Supreme Court.

If the perp’s charges are upgraded, he’s likely facing at least a voluntary manslaughter rap. If/when convicted, he’s going to be playing “drop-the-soap” in a prison shower for a long time.

You need to capitalize and underline the if portion of your if/then clause.

Droppings soap is never a problem for his dusky hind, only for others in the shower with his dusky kind. That’s why recidivism is so popular — all the man butt they can get for free.

perhaps live in a bubble but am of the opinion that there is no excuse–none–for what this guy did–an unprovoked attack on an innocent, elderly lady like Mrs. Ma is murder–she died as a direct result of his actions

And this was the second Asian woman he clobbered.

White Supremacy is a terrible thing to behold.

Obviously, the attacker was just a much a victim of this horrible scourge.

Yup. Elisaul Perez. As soon as I read his name, I knew it. A definite Trump supporter and White Supremacist.

When are we going to throw DJT in prison for this heinous crime he committed?

We can’t afford $50,000 a year to house and feed the recidivist. .25 cent bullet to the back of the head is more affordable and comes with a guarantee he won’t hurt another person again!

There are a lot of places in this country where the perpetrator would have been shot dead on the scene. That tends to discourage this type of behavior.

As soon as it is out of the news, he will be let loose again. And as long as he does not attack any of the Nomenklatura he will be continuing his attacks on the law abiding. It is Democrat ruled New York. It is what they do there.

Some cultures openly embrace the most depraved behaviors.

Don’t the tallies bury people up to the neck and invite anyone to hurl rocks until the head is gone??